You have permission to edit this article.
Edit
Home
All Publications
Book Reviews
Directory
Calendar
Store
1 of 7 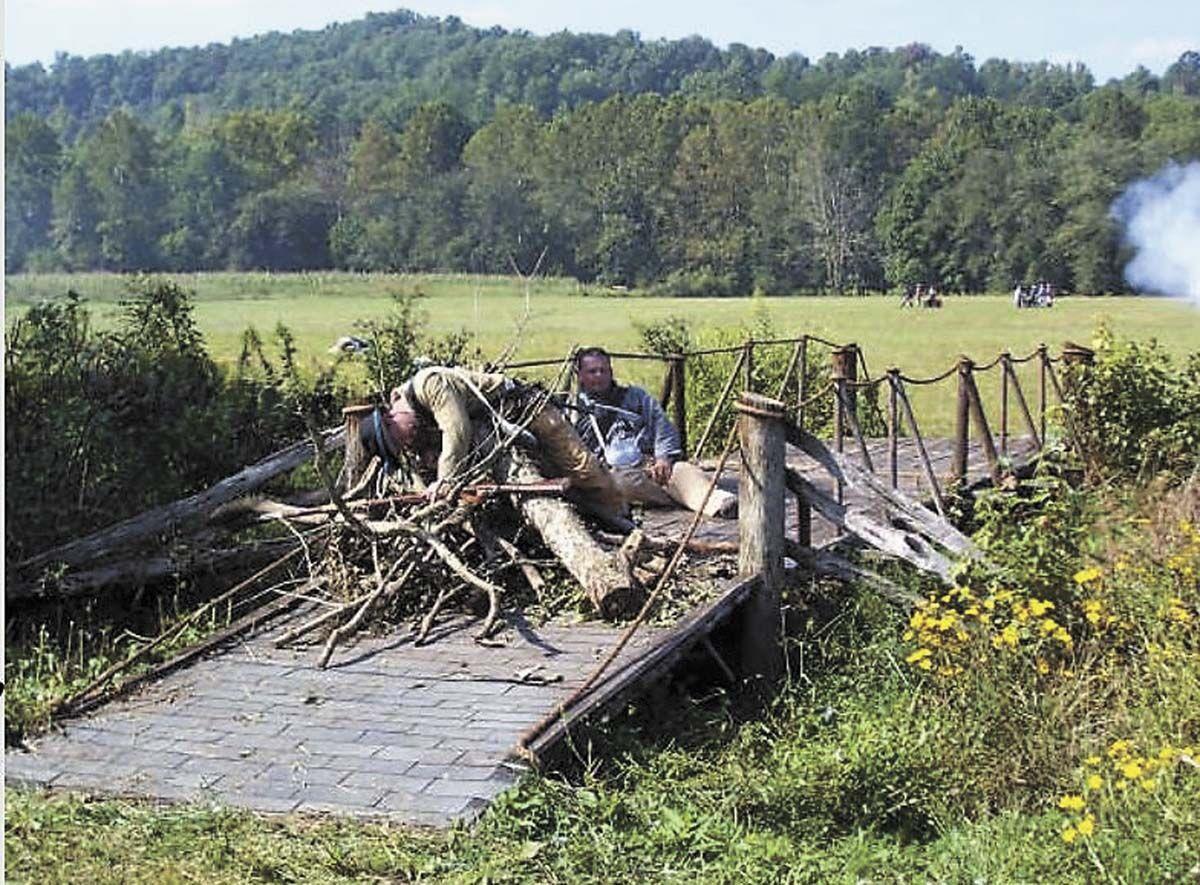 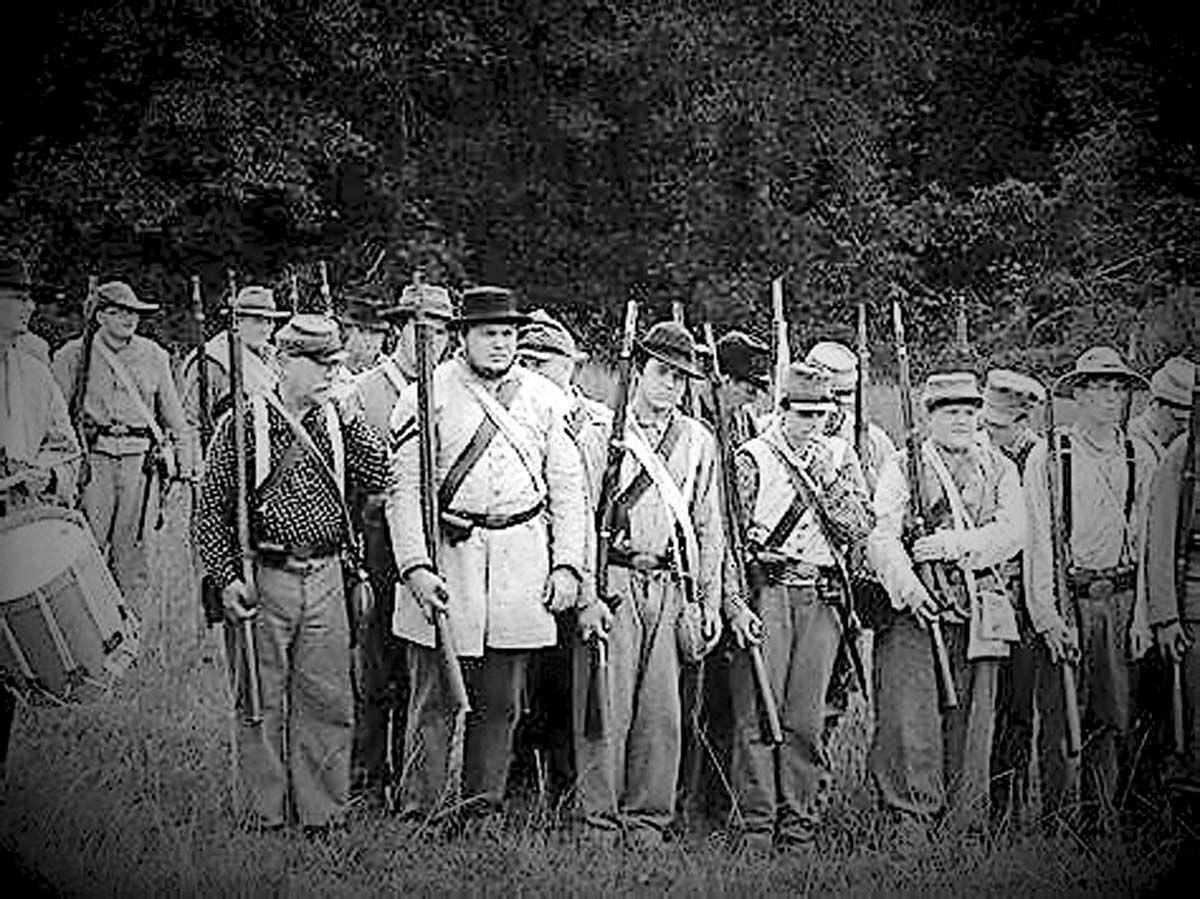 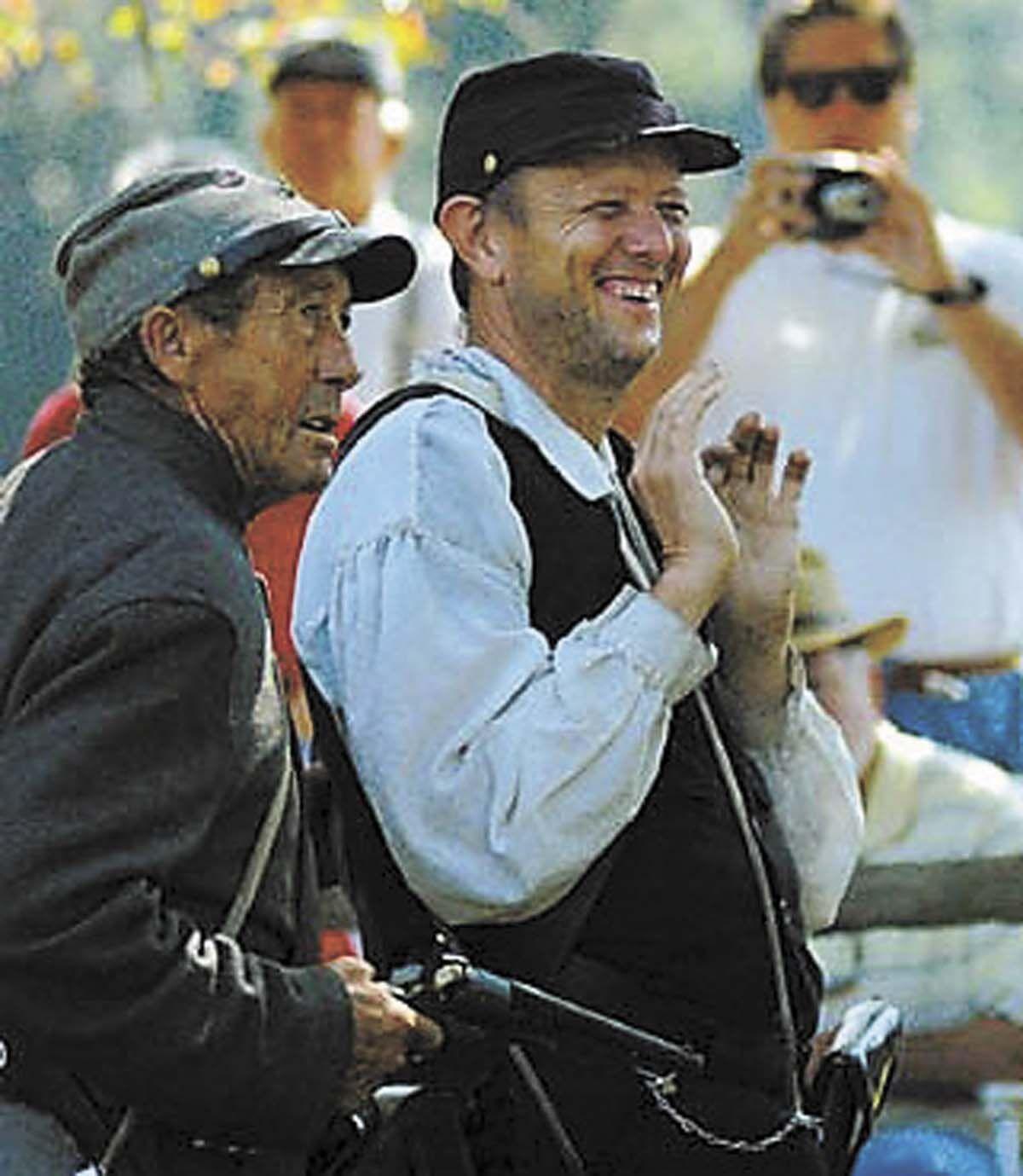 A shackled prisoner is led before a Confederate court-marshal to testify as a witness in a treason case during the Battle of Barbourville reenactment. He said he’d given a Confederate soldier whiskey in exchange for information on the location and number of Confederate troops in Barbourville. 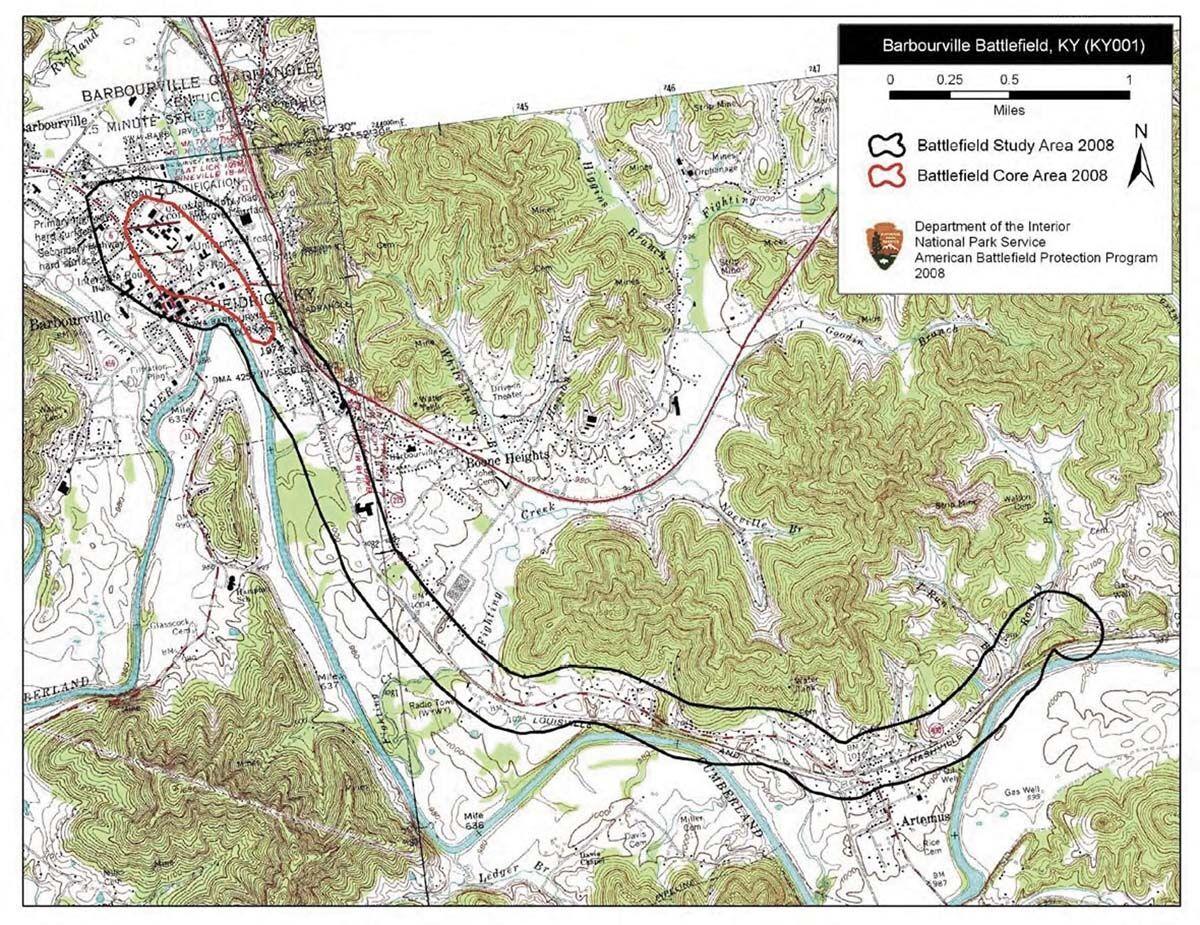 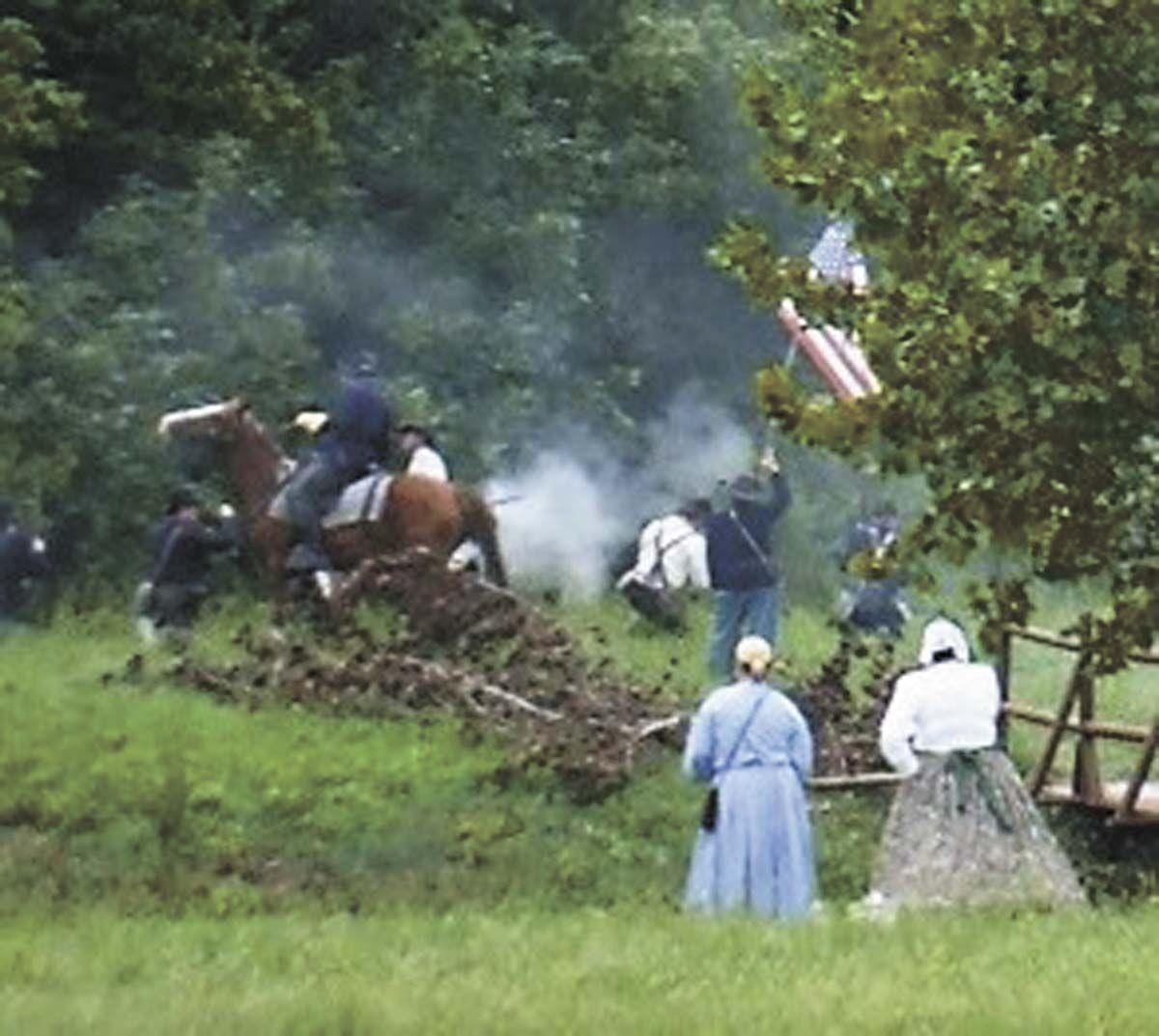 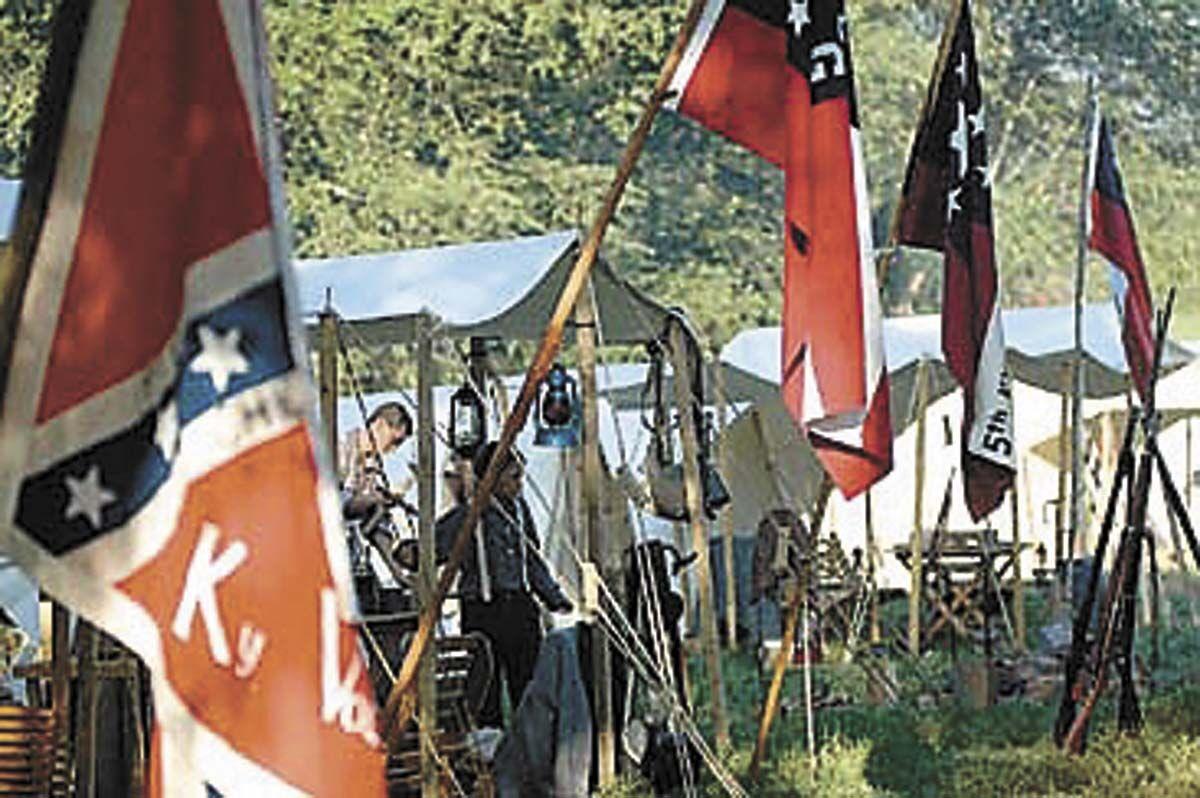 Regional flags hang from tents in the Confederate camp. Companies fighting in the war would often carry such flags — with their own versions of the stars and bars — and write the names of battles they’d survived on the flags afterward. 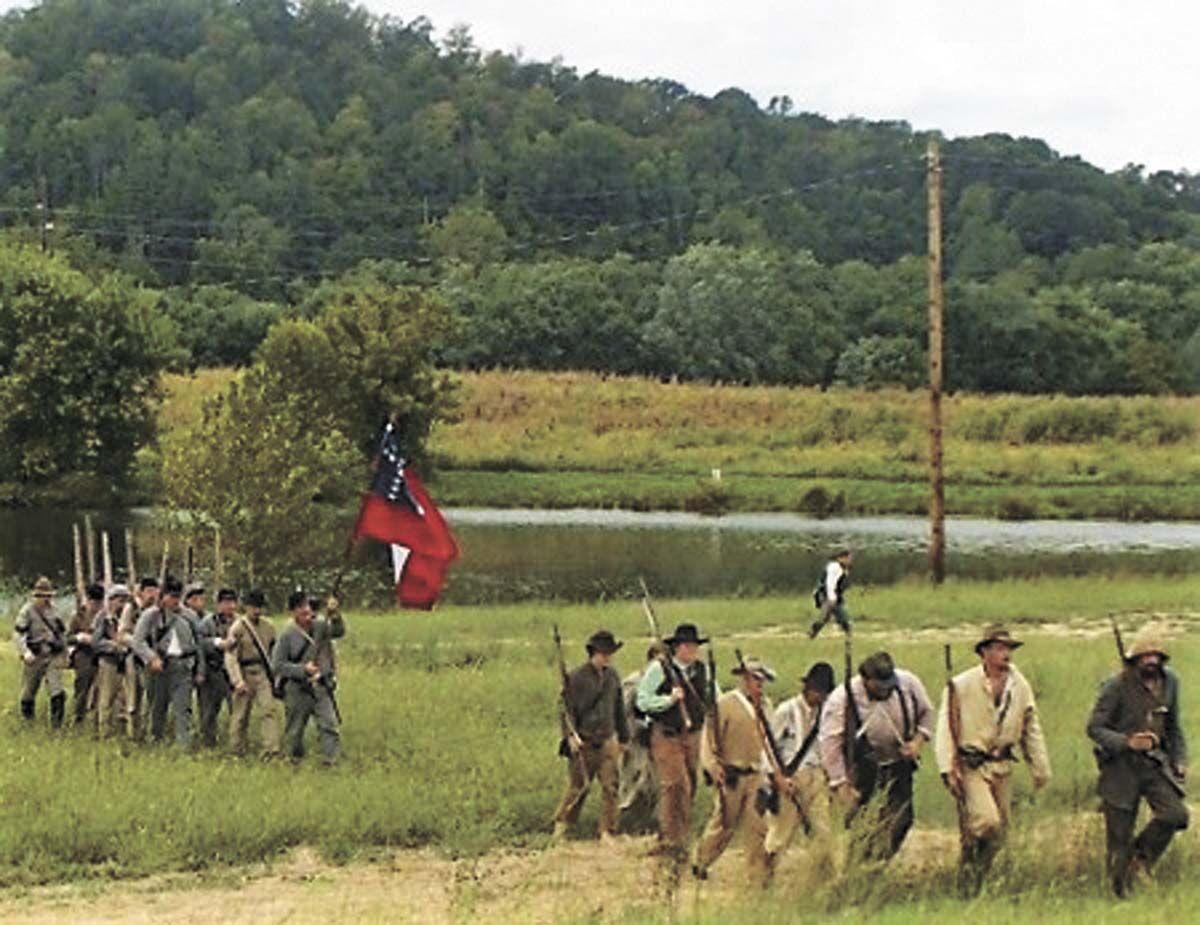 A shackled prisoner is led before a Confederate court-marshal to testify as a witness in a treason case during the Battle of Barbourville reenactment. He said he’d given a Confederate soldier whiskey in exchange for information on the location and number of Confederate troops in Barbourville.

Regional flags hang from tents in the Confederate camp. Companies fighting in the war would often carry such flags — with their own versions of the stars and bars — and write the names of battles they’d survived on the flags afterward.

Though the mountains rang with the sound of shot and shells, a full-blown engagement in Kentucky had not transpired. But all that was about to change at a little-known place called Barbourville.

The Southern War for Independence was in its infancy when the first recorded battle between the blue and the gray took place in Kentucky, shattering the neutrality that the Commonwealth had attempted to maintain.

The battle occurred in the southeastern part of the state, in the small town of Barbourville, Kentucky. Barbourville is nestled in the foothills of the Appalachian Mountains of Knox County on the banks of the Cumberland River.

The majority of the population of the community and outlying settlements were sympathetic to the Union cause.

Due to this and its unique location, which was easily accessible for men from East Tennessee and East Kentucky to gather in safety, the town was chosen to be a recruiting station for Union soldiers.

In early summer of 1861, the newly established Yankee recruiting station was named Camp Andrew Johnson. Local residents and soldiers referred to the camp as “Camp Andy.”

The camp was located in the approximate vicinity of present-day Union College and was also used as a training facility.

It was considered a satellite camp of the large, Union camp in nearby Garrard County named Camp Dick Robinson.

The newly formed collection of men was referred to as Home Guards, a name that the new soldiers could easily identify with.

To show their appreciation and commitment to the band of soldiers, the ladies of Barbourville made them a new Stars and Stripes flag. The flag was presented to the soldiers in a large ceremony (which included a large, picnic lunch) at the Baptist Institute.

Naturally, Confederate Officials eventually knew the location of the camp.

These officials knew that General Zollicoffer and his large Confederate army were in the process of entering Kentucky through Cumberland Gap.

Taking advantage of Zollicoffer’s location, Richmond officials sent orders for the general to attack the camp.

Zollicoffer’s original orders were to attempt to relieve some pressure on General Albert Sydney Johnston’s long, thin, gray defensive line that was spread across Kentucky by raiding and threatening Union strongholds in the state. Destroying Camp Andy would be a good starting place for this plan.

Leaving approximately two thousand troops behind in Cumberland Gap to control travel on the Wilderness Road, General Zollicoffer advanced in a northwest direction toward Barbourville, Kentucky. Near Cumberland Ford (now Pineville), located near the narrows of the Cumberland River, the General established a camp that he named Camp Buckner.

On approximately the fifteenth of September, one of Zollicoffer’s cavalry patrols was fired on by Home Guards in the vicinity of Artemus, a small settlement just east of Barbourville.

On September 18, 1861, General Zollicoffer ordered Colonel Joel A. Battle to advance on Barbourville and attack the Home Guards with approximately eight hundred men, mostly comprised of the 20th Tennessee Infantry.

Having become bored with the constant drilling and patrolling, many soldiers of Zollicoffer’s army eagerly volunteered to go with the 20th Tennessee Infantry seeking action.

One of these volunteers, Lieutenant Robert D. Powell of the 19th Tennessee Infantry, borrowed a horse to be at the lead of this formidable force. This eagerness on his part would later prove to be fatal to this young, but brave, southern soldier. The young men of both armies had not yet experienced the tragedy and horrors of war but it would soon be a realization to all.

Unfortunately for the Home Guard at Camp Andy, most of the recruits had been ordered to Camp Dick Robinson for additional training.

Hoping to increase the chance of defending the small town from an army that was more than twice the number of men at his disposal, the captain ordered the planks to be removed from the bridge that crossed into town.

This bridge was near the present-day location of the intersection of Cumberland Avenue and Daniel Boone Drive. Expecting the attack to occur the following morning, Captain Black positioned his men and ordered them to lay with their weapons.

Undoubtedly, the men of the Home Guard spent a restless and anxious night, believing each snap of a twig and unusual noise was the expected attack.

Before daybreak on the morning of September 19, 1861, Colonel Battle ordered his men to begin their march on Barbourville.

The excited boys in gray eagerly fell into columns, each hoping to ‘see the elephant’.

Just as the sun was beginning to rise, the lead elements of the mounted men of Colonel Battle’s column arrived at the bridge leading into Barbourville.

The mounted soldiers stopped at the entrance to the bridge and in the early morning fog, realized that the planks were missing. This hesitation cost them dearly as the hidden Yankees on the opposite side opened fire, emptying several saddles with a ragged volley.

The first to fall was Lieutenant Robert D. Powell, the young volunteer. Allegedly he was the first Confederate soldier to be killed in action not only in Kentucky, but also the first to fall outside of Virginia. Virginia. Unfortunately, many more brave and noble men from both sides would die untimely deaths for the cause that they believed in before the long war would end.

Private Henry Lawson Wyatt of the First North Carolina Volunteers was the first Confederate killed during the Civil War. He was nineteen years of age and was killed in the Battle of Big Bethel.

He is buried in the Hollywood Cemetery, Richmond His statue honoring his bravery in battle was removed from the North Carolina State Courthouse in late June of 2020 and now resides in ‘offsite storage’ location unknown. (Henry Lawson Wyatt Monument | NCpedia)

Immediately, the Confederate raiders took positions on both sides of the road and began an intense fire upon the Yankee positions across from them.

For several minutes, both sides exchanged volleys, neither willing to give way to the other.

Realizing that the stalemate could continue for some time, Colonel Battle had an idea that might end it with less bloodshed.

In a loud voice that was meant more for the benefit of the Home Guards than his own men, the colonel hollered out a command to clear the way for the artillery.

Hearing this order, the men of the Home Guard knew they could never stand against such an awful weapon and began to retreat.

Captain Black knew that he had only two mountain howitzers to counter the threat of artillery and one of those was at Cannon, a small community north of town. The bluff had worked, and the dreaded onslaught of artillery fire never materialized.

Even though the Home Guard no longer guarded the bridge, Colonel Battle’ s men could not cross over it because the removed planks were on the opposite side.

The Confederates were determined to take the town however, and marched to Sampson Hill, an avenue into the town that was easier to traverse.

The Home Guard troops under Captain Black’s leadership, refused to give up the town without a fight and continued to fire upon the Confederates.

Realizing he could not stop the Rebels, Captain Black and his men began to retreat up Little Richland Creek toward Cannon, fighting a delaying action as they went.

At Cannon, the Home Guard made one more attempt to stem the gray tide before them.

Exchanging volleys once more for several minutes, the hard charging Rebels began to push forward again, which resulted in the retreat of the demoralized men in blue who disappeared into the mountainous terrain nearby like a fine mist in the morning.

Colonel Battle knew that it would be foolhardy to pursue the Home Guard into woods that they would know like the back of their hands. Content with having forced the boys in blue to retreat, he and his men returned to Barbourville.

The Confederates destroyed Camp Andy, confiscating anything of value. For some unknown reason, the boys in gray supposedly destroyed the tax records of the Knox County Sheriff’s Office.

It is possible that a local citizen took advantage of the situation to help them self financially. At the camp, the Confederates were disappointed in not capturing the Home Guard’s new flag.

The brave ladies of town had slipped into camp during the fighting and retrieved the flag, which they had so lovingly labored on. At present, the flag so carefully made and courageously fought for, is on display at Union College.

With the fighting over, Colonel Battle ordered the body of Lieutenant Powell returned to Cumberland Gap. From there it was transported back to his hometown of Rogersville, Tennessee, for burial.

The Home Guards had fifteen (15) men killed and the Confederates had five (5) killed, three of their losses being officers.

Though the casualties were small compared to later conflicts, the battle was important in several aspects.

Kentucky’s dream for neutrality was at an end, the Confederacy had obtained one of their first victories and proved to Union commanders that Kentucky was not completely under their control.

The first of many bloody encounters between the two warring armies had taken place, resulting in thousands of Kentuckians rushing to join Confederate regiments. One of these first regiments was the 5th Kentucky Infantry, formed in the mountains of southeastern Kentucky. (Taken from Appalachian Rebels; Brown, Richard G. & Chaltas, David; 2007; Pages 9-11)