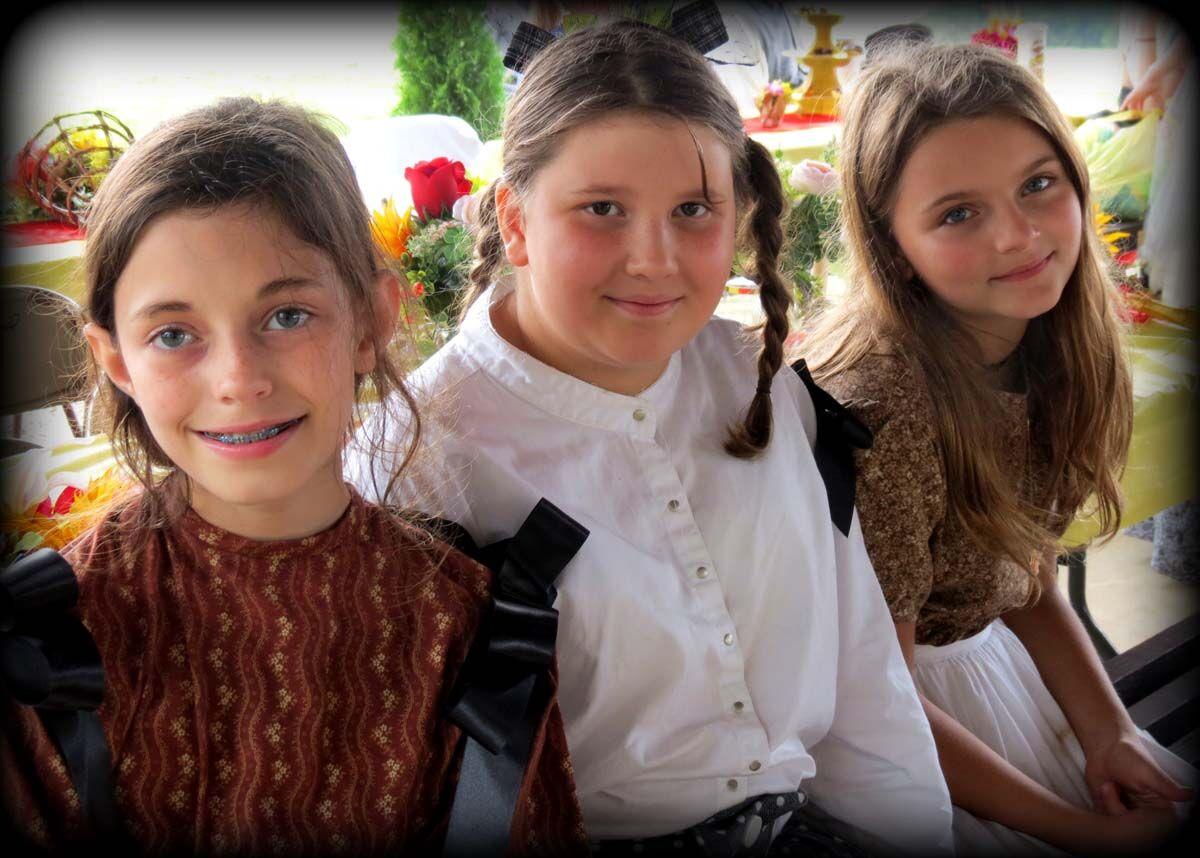 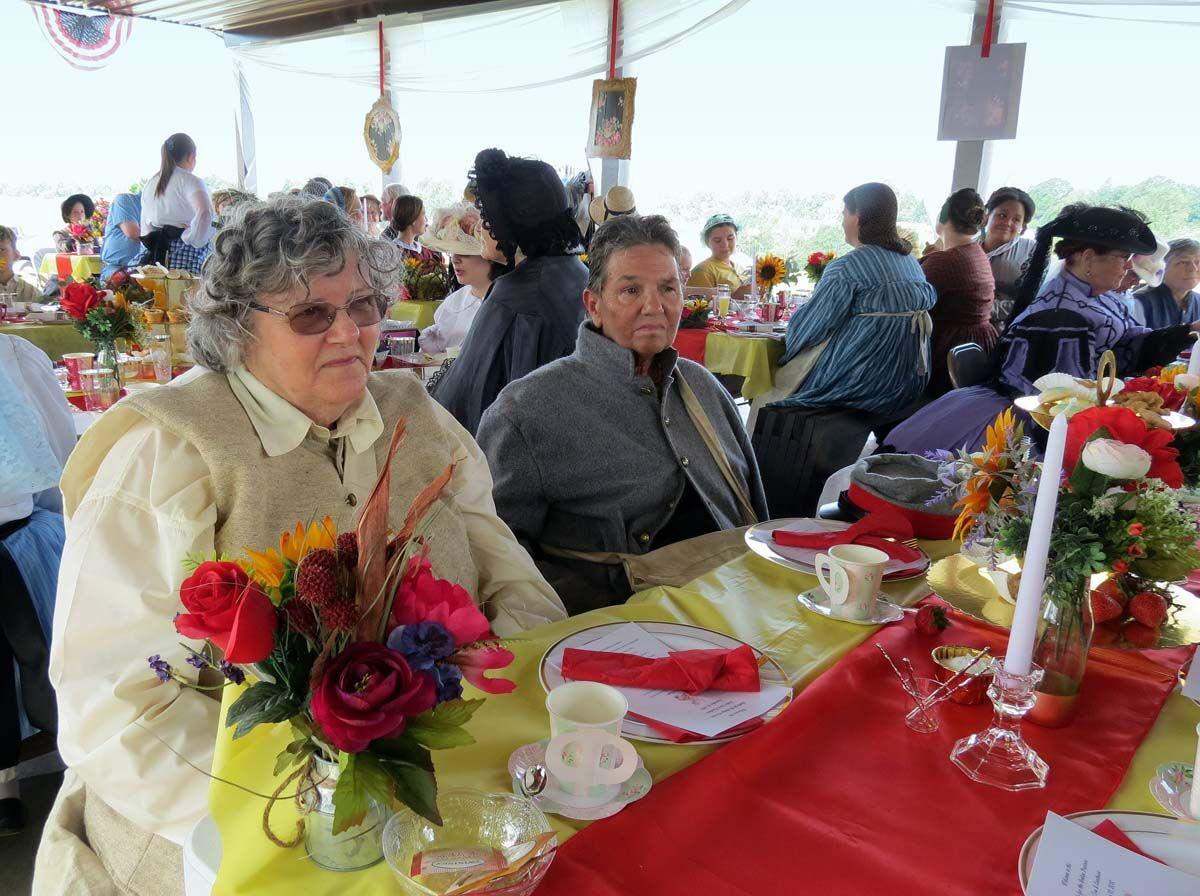 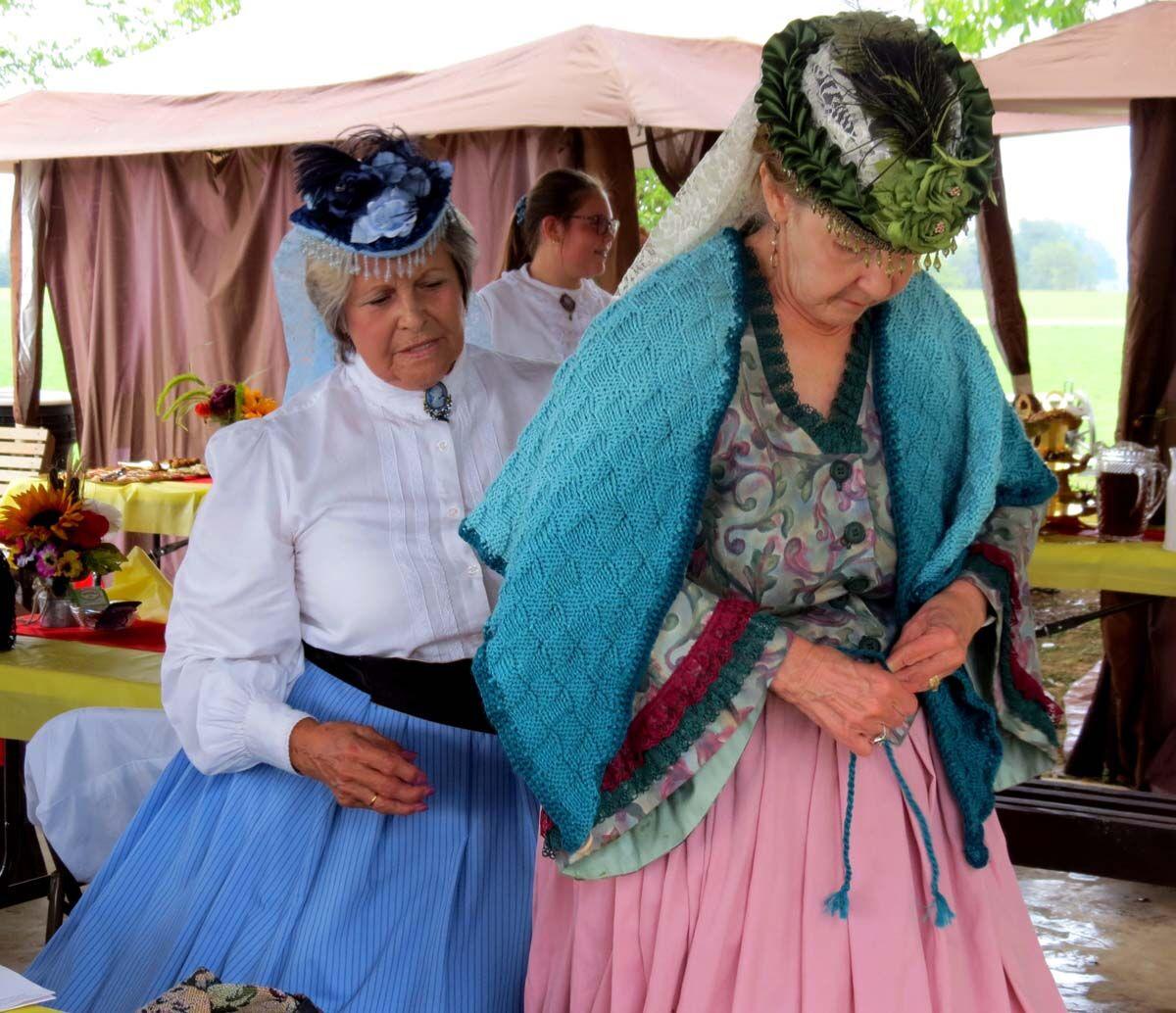 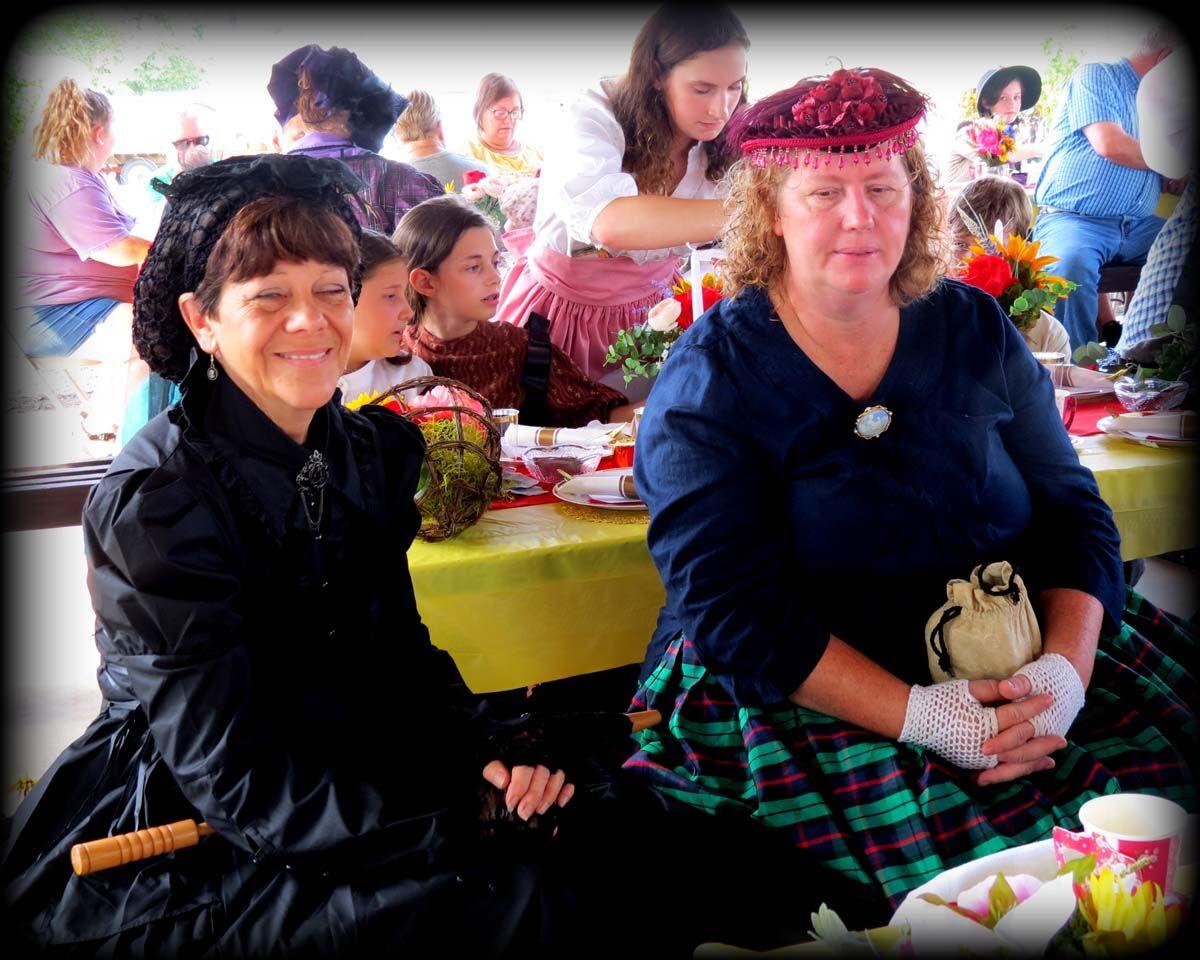 The Confederate Belles of Tennessee were pleased to attend the Battle for the Bridge Ladies Tea and Luncheon on Saturday, September 12, 2020 at the annual Civil War reenactment at Munfordville, KY.

Our utmost appreciation to Mrs. Amber Ard, her very capable assistants, and the Hart County Historical Society who did an outstanding job with the beautiful, colorful decorations at the party venue and the plentiful and delectable tea fare, in addition to providing all their guests with a generous helping of southern hospitality at its finest.

The battle site’s newly built pavilion was decorated in period style with white drapery, gold framed Victorian inspired flower patterns, potted plants, and red ribbons for the alfresco tea party. A large crowd of about 80 charming ladies and well-mannered children, attired in fashions and accessories befitting the 1860 time period, gathered at the pavilion for the occasion.

Tables laid with yellow tablecloths and red runners were bright and cheerful and the lush late summer fresh floral centerpieces were a delight to behold. Our hostesses were lovely young ladies dressed in period day gowns. They graciously served their guests a delicious and varied menu of savory and dainty refreshments. It was a picture-perfect setting for a nostalgic social function on a pleasant summer day in Hart County, Kentucky.

The ladies were delighted with the arrival of special guests, General Robert E. Lee, and his adjutant Major William Harris, General and Mrs. Ulysses Grant, and Chaplain June Fields.

General Lee spoke warmly to the ladies thanking them for the invitation that included Major Harris to join them for tea. He also remarked on the beauty of the table settings and decorations. General Lee reverently asked God’s blessing before the luncheon began.

Following the luncheon, we were entertained by two very pretty and talented young ladies. Miss Olivia Ramsey sang her beautiful rendition of “My Old Kentucky Home” and Miss Ruby Devine charmed us with her performance of “The Battle Hymn of the Republic.”

The Confederate Belles of Tennessee were honored to offer a program at the Ladies Tea that concentrated on the lesser known facts, articles, and accessories used and worn by the ladies of the 1860s. It was impeccably presented by eleven Belle members by first person impression, demonstration, and exhibits.

Our first demonstration was the new item of cutting-edge feminine apparel and the first dedicated swim apparel for women, the two-piece bathing costume called a “bathing suit.”

It was introduced in the 1850s and was quite different from other forms of bathing apparel for women.

Bathing suits were made of warm wool or heavy flannel and accessorized with hats and long capes for modesty. Prior to the bathing suit, women wore long shift like dresses that had to be weighted down at the bottom to prevent floating up when in water.

A small bertha cape was worn over the shoulders and a small-gathered bathing cap of the same fabric and ivory braid completed the ensemble.

A burgundy flannel bathing suit was worn by Regina Sharp. This outfit featured a fitted bodice with long sleeves, a gathered skirt tied at the waist with a black flannel sash that was worn over straight cut long pants. The ensemble was trimmed with black flannel bands on coat sleeves, bottom of skirt, and lower edge of pants. A sun hat made of straw and accentuated around the brim with burgundy feathers topped off the costume.

Linda Engle discussed proper attire for people attending funerals that were not part of the immediate family. She provided a display of black mourning cockades or badges, armbands, and shoulder bows for children.  Full mourning attire was reserved for the family of the deceased only. Therefore, to honor the deceased, black mourning cockades were worn by women high on the left sleeve and black armbands that tied on the left arm for men was the appropriate display of mourning by friends and the grieving public. If a boy or girl was old enough to attend a funeral, then they would wear the same armband or cockade the adults would wear. The choice color for small children and young girls in mourning for family member was white dresses with black bows on the shoulders and sometimes a black sash.  Our lovely young Belles, Miss Ashlynn Clement, Miss Charlotte Bangle, and Miss Isabella Bangle, modeled the mourning bows for children.

Pvt. Patrick Walsh and Pvt. Phineas Riggs of McClung’s Battery presented an excellent first-person impression of women masquerading as men in order to join the army during the Civil War. Women joined the army for three reasons, #1 was to support the Cause – many women were as patriotic as men. #2 they were following their husbands, sweethearts, or brothers. #3 money and a more independent social status. Only three physical abilities would be absolutely necessary to qualify as a soldier, a good shooting eye, able to use both arms and legs for work, and enough teeth both upper and lower to rip the paper off the cartridge and load his rifle. These adventurous females entered a life of unimaginable challenges and went to great lengths to hide their femininity. The assumed men’s names, cut their hair, smudged their faces and hands, bound their bosoms, wore loose men’s clothing, padded the shoulders and chest of their jackets, and avoided public latrines. Many women’s ruse was discovered which resulted in being discharged and sent home. Some female soldiers’ identities eventually became known but by that time they had become excellent soldiers proving themselves capable of pulling their own weight that their fellow compatriots chose to turn a blind eye.  Then there were some female soldiers whose deception was never discovered. The independence and the livelihood this masquerade provided was enough for many brave and unconventional Victorian era women to risk everything and make it a way of life.

An unusual exhibit of differing colors and styles of “waist pouches” was presented by Phyllis McFolin. These small pouches were worn on the outside of a skirt and attached to the waistband by button, hook, or sewn on with needle and thread and suspended from the waistband by fabric, ribbon, cord, or a delicate chain and usually made from left over dress material. Victorian ladies adorned these little pockets with embroidery, lace, tassels, etc.  Waist pouches were important as most skirts in the 1850s and 1860s did not have sewn in pockets. The lady of the house found the small outside pocket to be very useful in keeping important items on her person while freeing her hands for daily tasks.  Small items, such as a handkerchief, the key to the sugar chest or liquor cabinet, perhaps a watch, would be tucked away in the waist pouch. A black satin chatelaine bag was a fancier version of the waist pouch and was on trend from 1860-1900. They were somewhat larger and made from satin, silk, velvet, or other quality fabrics, trimmed with lace, and usually attached to a coordinating belt or a waistband by a brooch pin.  Chatelaine bags would be worn at the side of the waist instead of carrying a reticule. The waist pouches and chatelaine bag on display at the Ladies Tea were made from the French patterns that appeared in Peterson magazines 1860-1864.

Karan Franklin gave an excellent talk about the difficulty the War Between the States presented when the South found itself blockaded from sending or receiving much needed commodities. The Union blockaded all ports of entry from Spain, France, and England, and goods from these countries were stopped. The Southern woman found herself in great need of items that had previously been sent from northern and European factories such as a needle and thread. Being agrarian, factories kept Southron families equipped with these items and now these ladies were in dire straits. Even a small loose thread was kept for reattaching buttons and hems.

Whitney Qualls brought a long-forgotten item called a hair receiver that was a common fixture on the dressing table of women from Victorian days well into the 1950s. This small, delicate pot resembled a powder jar with a finger size opening in the center of the lid. It was made from a variety of materials with porcelain being the prettiest and most sought after.  Ladies saved hair from their brush and comb, wound it around their finger and pushed it into the hole in the lid. Once enough hair was accumulated, it would be stuffed into sheer hairnets and sewn up to create “ratts” or extra hair that was used to create volume in women’s hairstyles. Whitney used a ratt in Isabel Bangle’s hair to demonstrate how it enhanced a hairstyle with additional fullness. The widespread use of “extra hair” was addressed in the popular Godey’s Lady’s Book.

The Sontag, also known as a Bosom Buddy or Bosom Friend, was introduced by Dorothy Reed to demonstrate the correct way to wear it. She brought three handmade Sontags in green, beige, and black for the ladies to see. This particular item of feminine apparel was a type of fitted shawl, usually knitted in wool, and allowing for some stretch. They were worn in cold weather over a bodice indoors and retained under mantles when venturing outside.  Sontags were triangular in shape with front points crossing over the bosom and held by an attached belt or buttoned to the back point. Different colored wools were used and adornments like tassels added for a dressier look.

The Confederate Belles of Tennessee wish to thank Amber Ard and the Hart County Historical Society for allowing us to be part of their Civil War event. The many hours they spent planning and preparing the Ladies Tea and Luncheon created a memorable experience for all the guests in attendance and, no doubt, everyone is looking forward to the 2021 Ladies Tea.

Respectfully submitted by the Confederate Belles of Tennessee