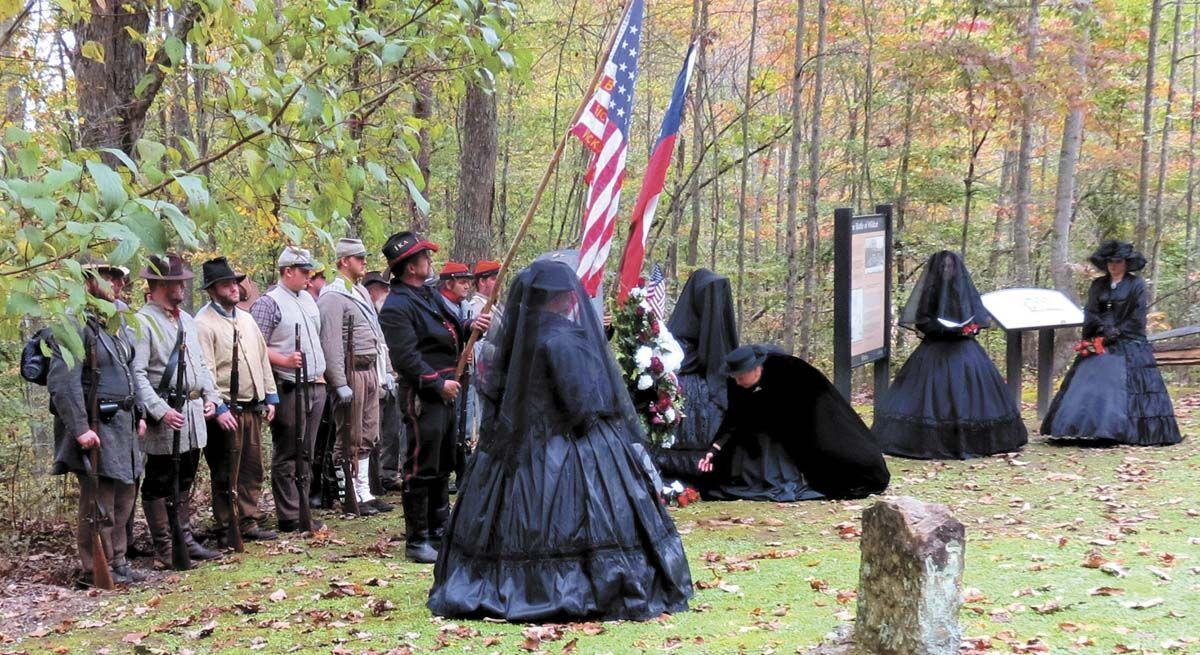 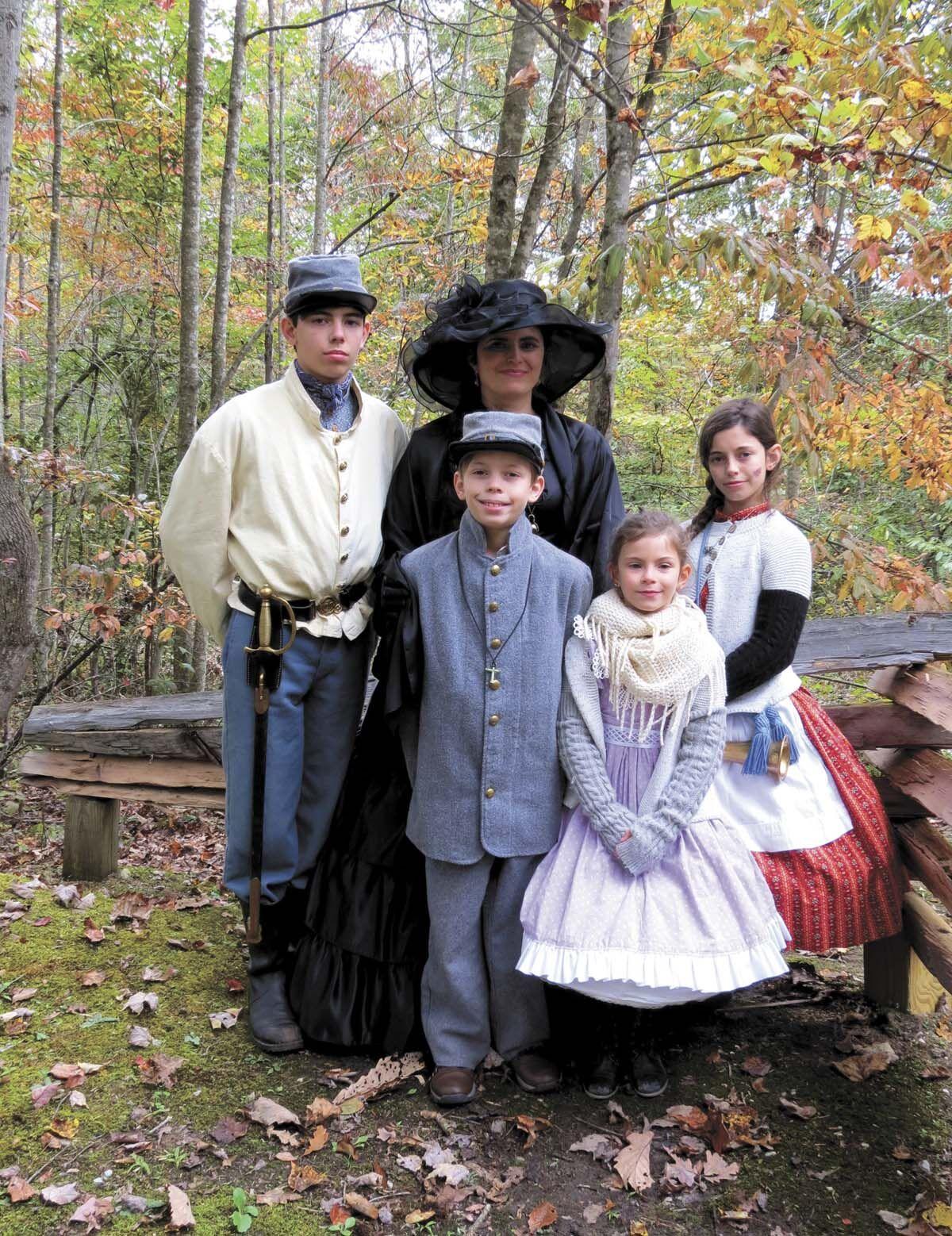 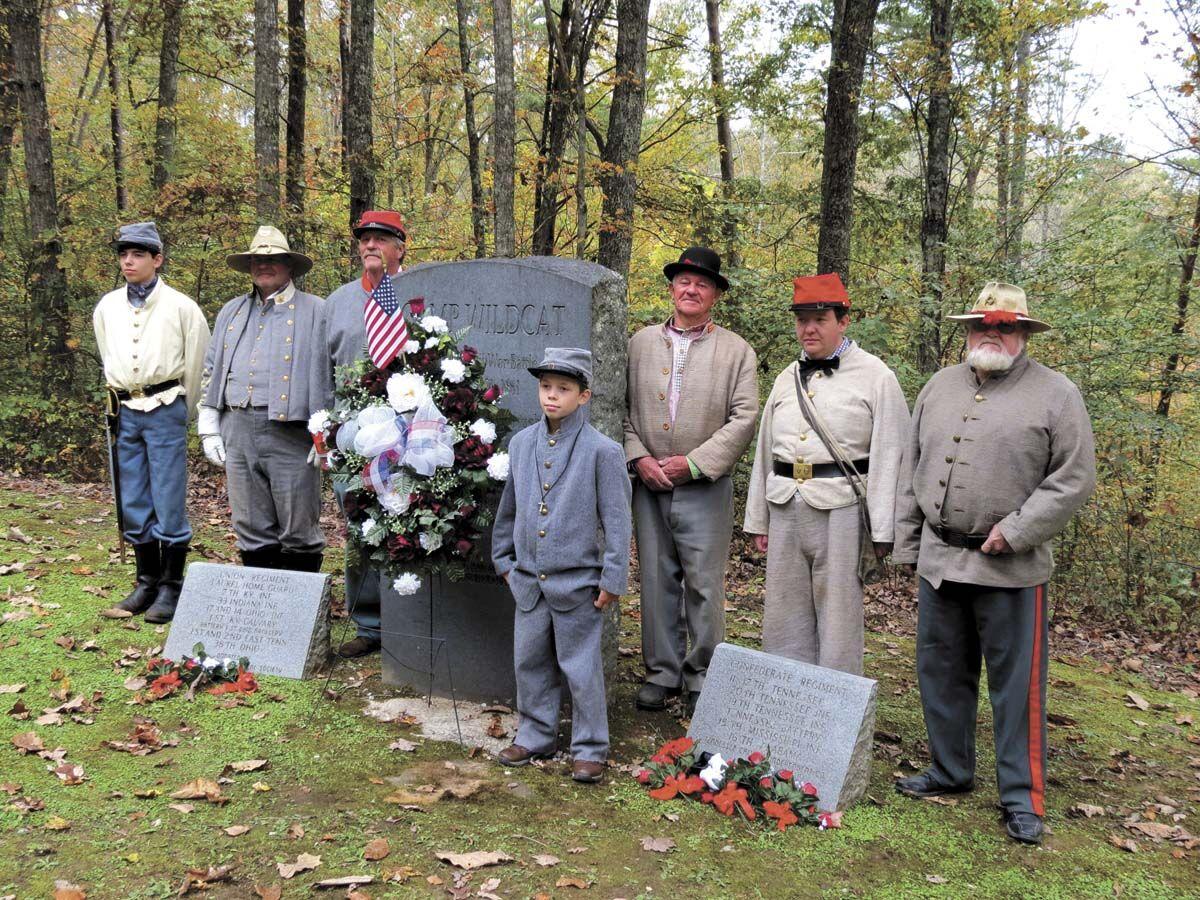 Wildcat Mountain, Kentucky was the site of a solemn memorial service honoring the Confederate and Union soldiers that were engaged in the Battle of Camp Wildcat, KY. on the morning of October 21, 1861.

Reenactors from the Battle of Camp Wildcat set aside time, on the misty Sunday morning of October 18, 2020, to remember and pay homage to the Civil War soldiers’ place in time and the events surrounding that fateful day, and what was for many, their last day on earth.

The Confederate Belles of Tennessee joined in with other ladies dressed in 1860 traditional mourning attire to honor the fallen soldiers.

It was a somber yet emotional ceremony as the flags were unfurled, soldiers marched in and took their place behind the monuments, Bible passages were read and prayers offered.

The Confederate Belles stood side by side veiled in the customary black with a mist of tears filling the eyes of some.

We stepped forward, one at a time, to announce our ancestor’s name, gently laying flowers at the base of the Union and/or Confederate monuments, followed by a dignified curtsy of reverence, which was protocol in the Civil War era.

He was then assigned to Morton’s where he stayed for most of the war. At Parkers Crossroads he served with Freeman’s Light Artillery for a short time. Pvt. Walsh began his military service with the 1st Tennessee and ended the war with the 10th.

The sweet sounds of Amazing Grace was sung by the reenactors amid the autumn splendor of majestic color and falling leaves. Then a rifle volley filled the air signaling the closing of the ceremony.

Many gathered for photographs around the historic markers engraved with the names of the Regiments that fought in the Battle of Camp Wildcat.

This significant battle site is located on the famous Old Wilderness Road which, in the late 18th century, was a major immigrant route into

Kentucky and the American West. Twice it carried Confederate armies into Kentucky: Zollicoffer’s Army in the fall of 1861, and Major General Edmund Kirby Smith’s Army of Kentucky in the summer of 1862.

We close this missive with the eloquent words of two well-versed gentlemen.

They impress upon our hearts the value of keeping alive the memory of the fallen.

“They are dead: but they live in each patriot’s breast, and their names are engraven on honor’s bright crest.” Henry Wadsworth Longfellow, American Poet and Educator

“So will we keep their memories fresh and green where they can be best perpetuated; not by flowers strewn on their graves, for these soon wither and are scattered like leaves in wintry weather, but by the flowers of loving remembrance which grows in our hearts, and which are watered only by tears. These are immortal, and bloom in beauty and fragrance forever.” Rev Moses Drury Hoge. Gleaned from his speech in Richmond on November 30, 1892. Taken from the Chaplain’s Handbook, Sons of Confederate Veterans.