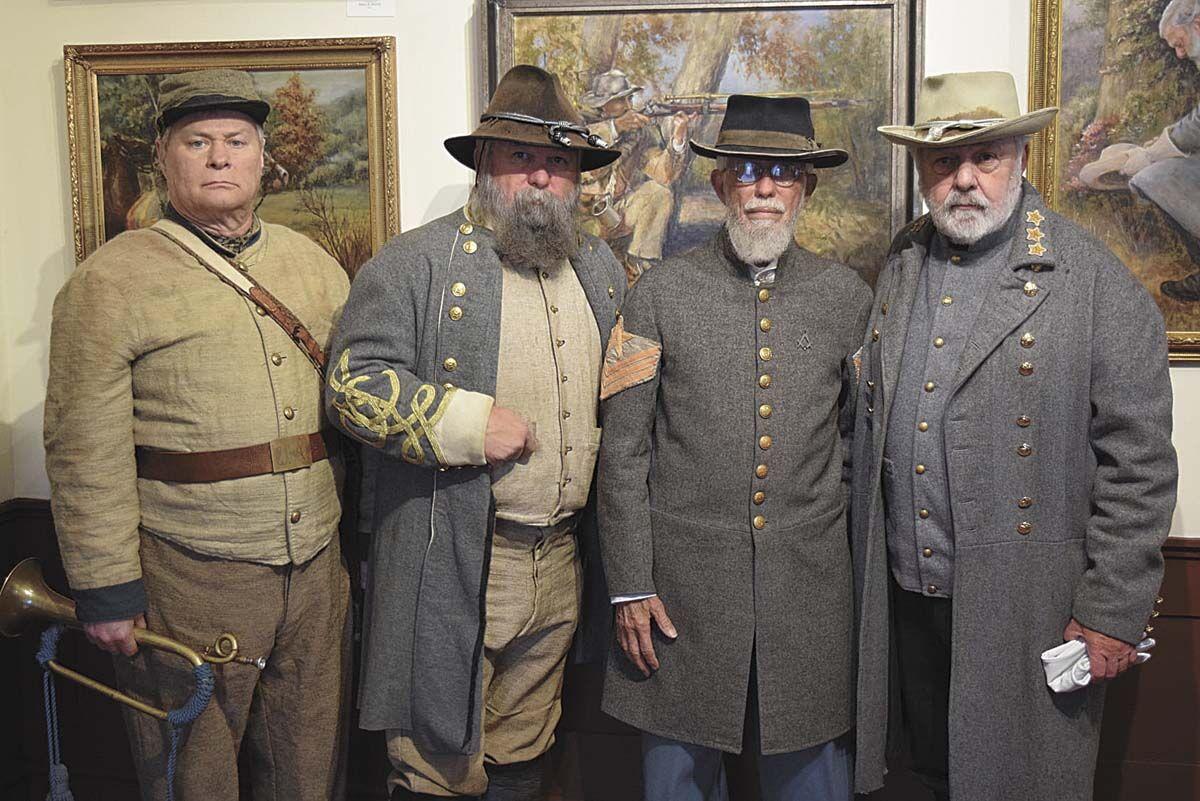 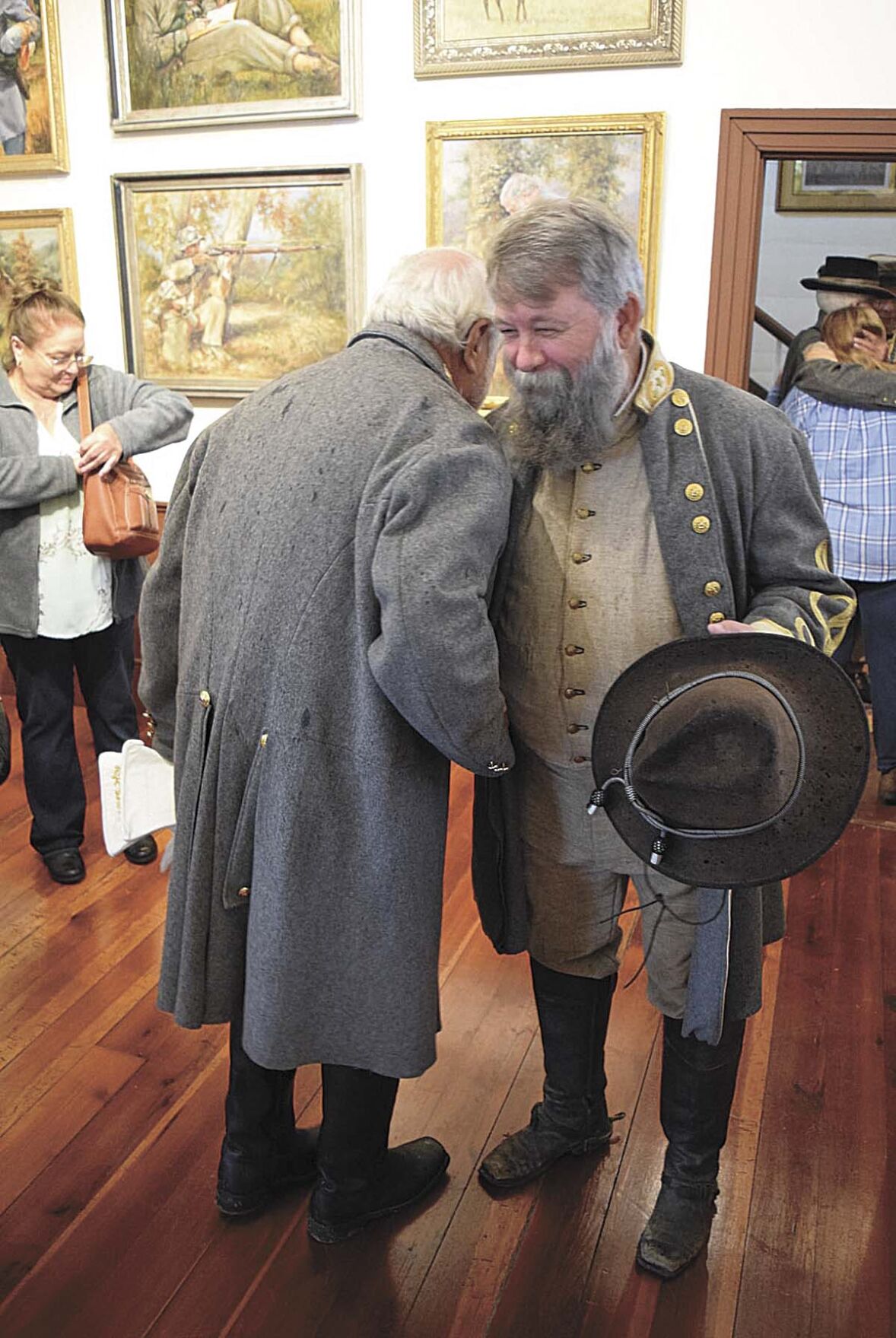 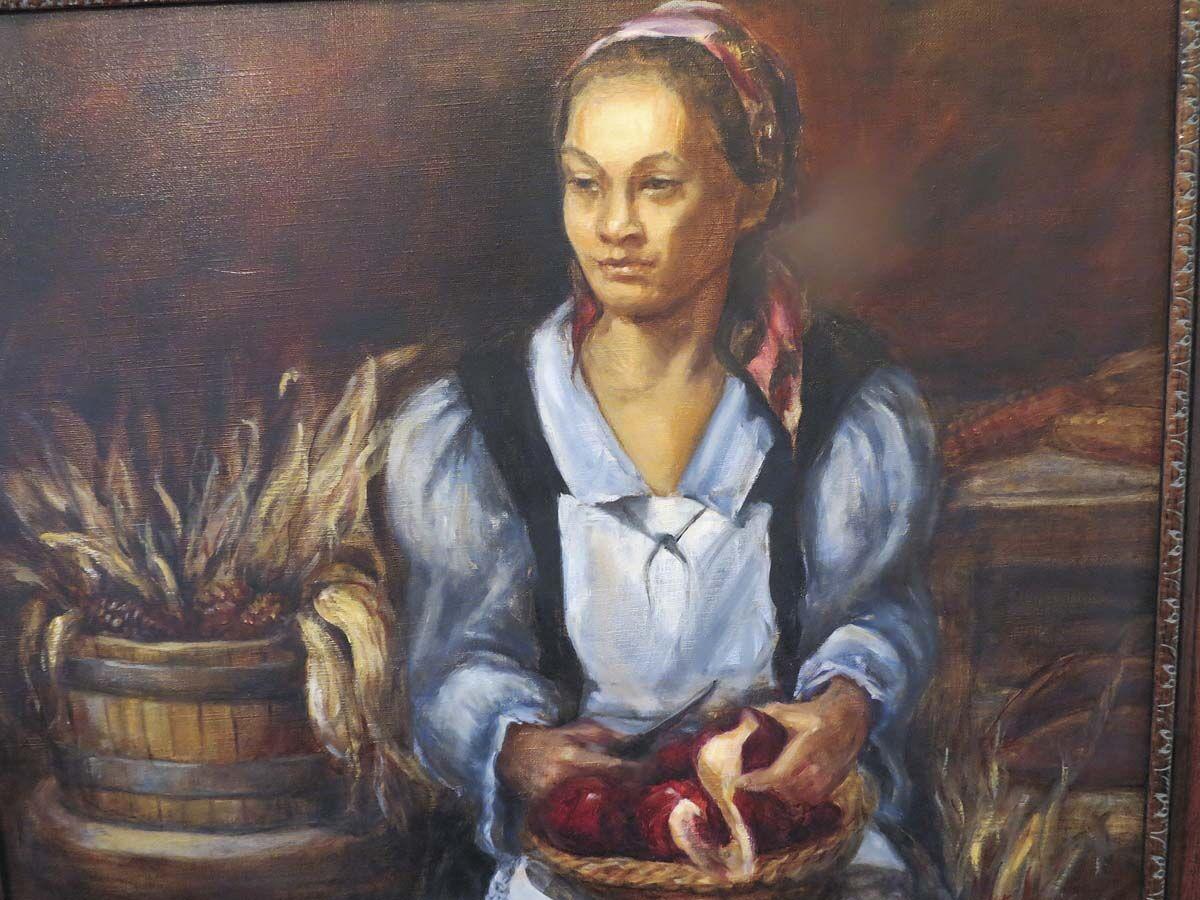 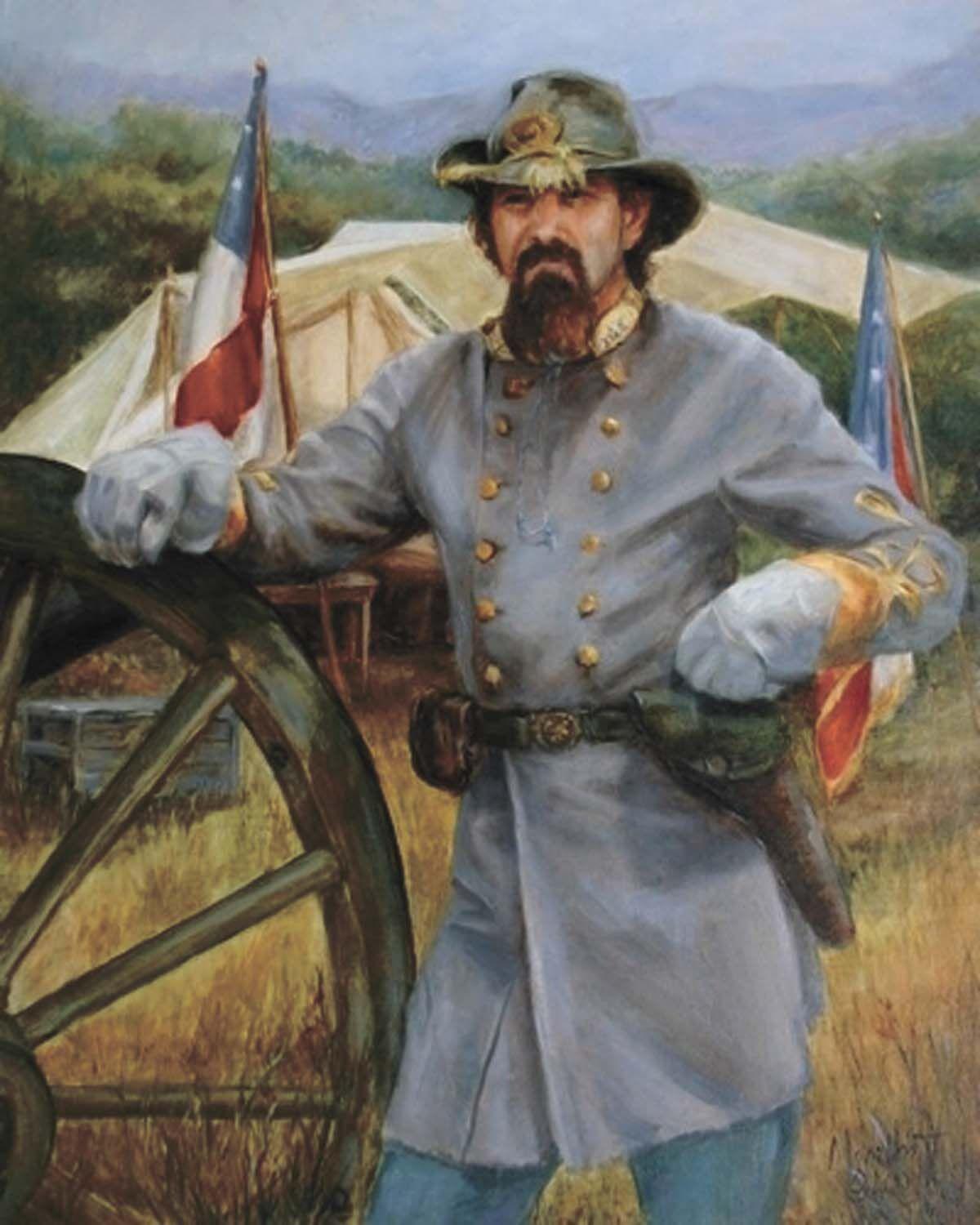 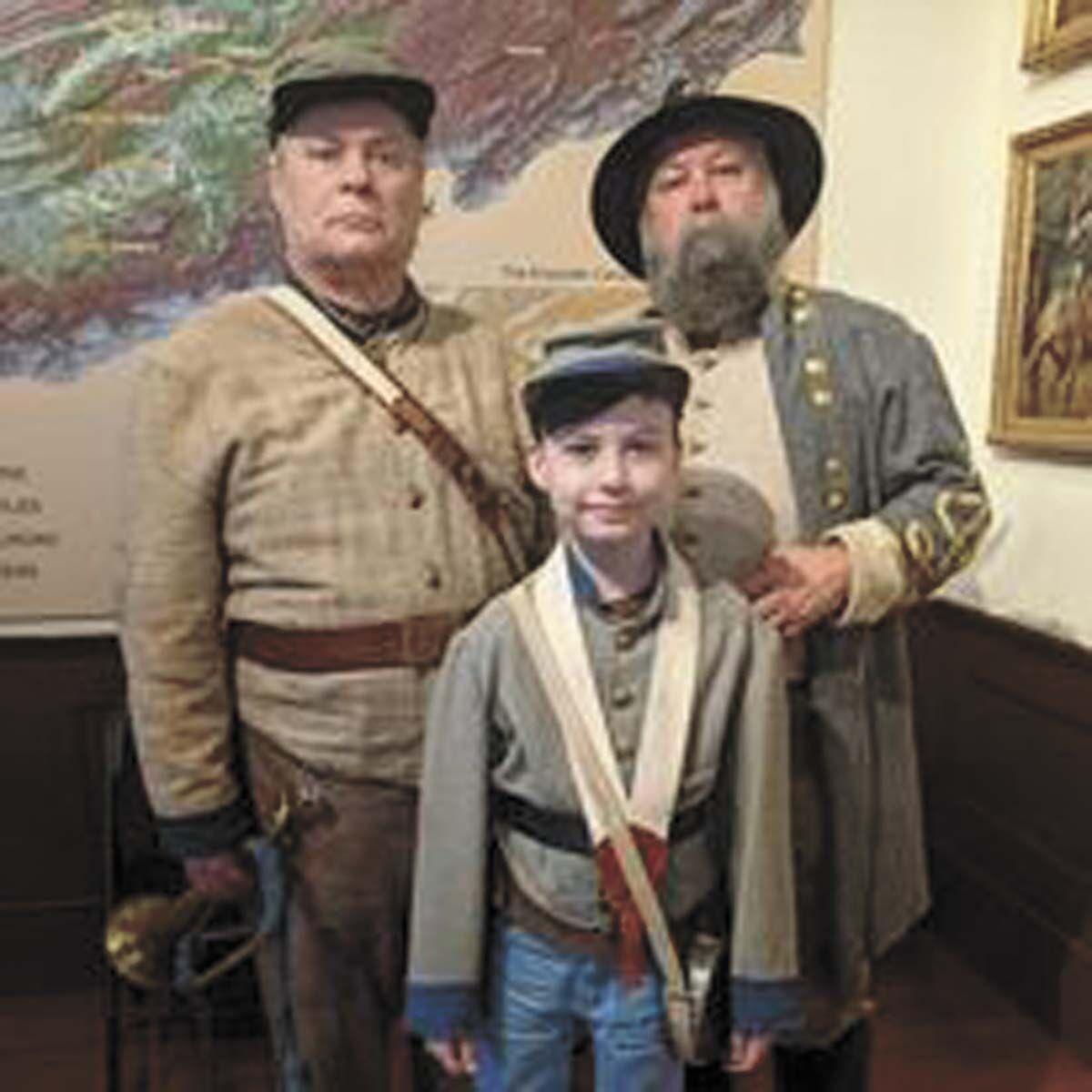 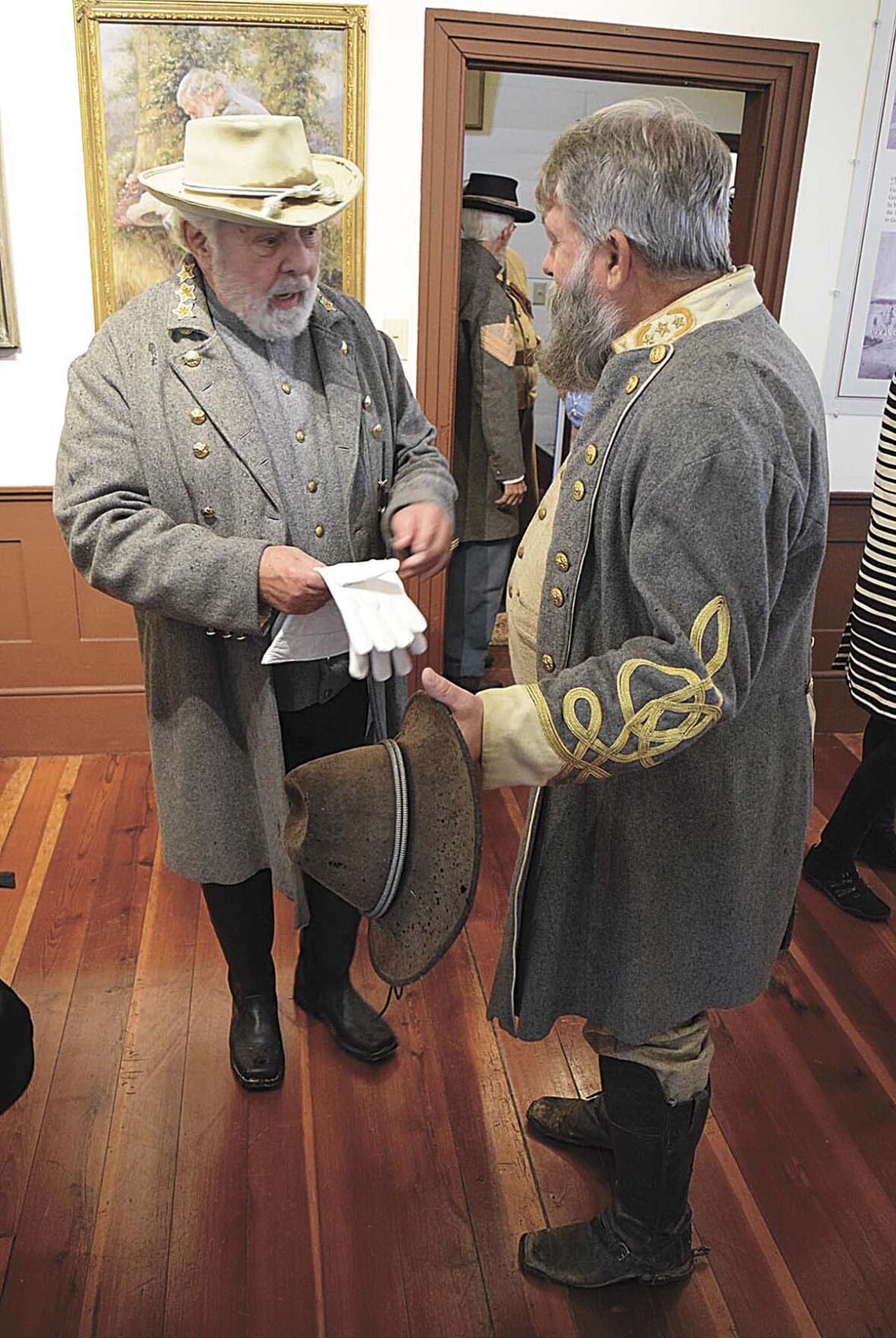 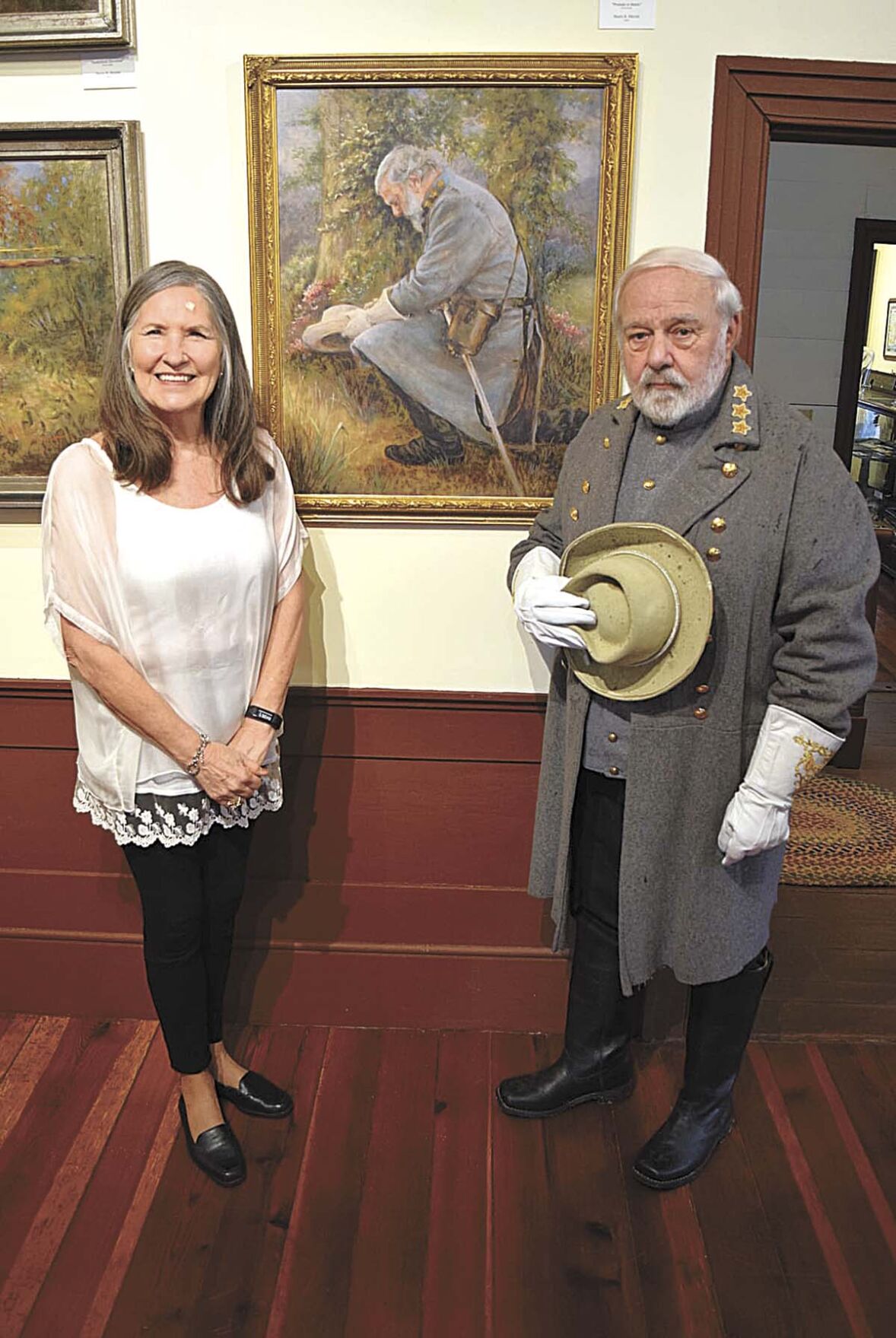 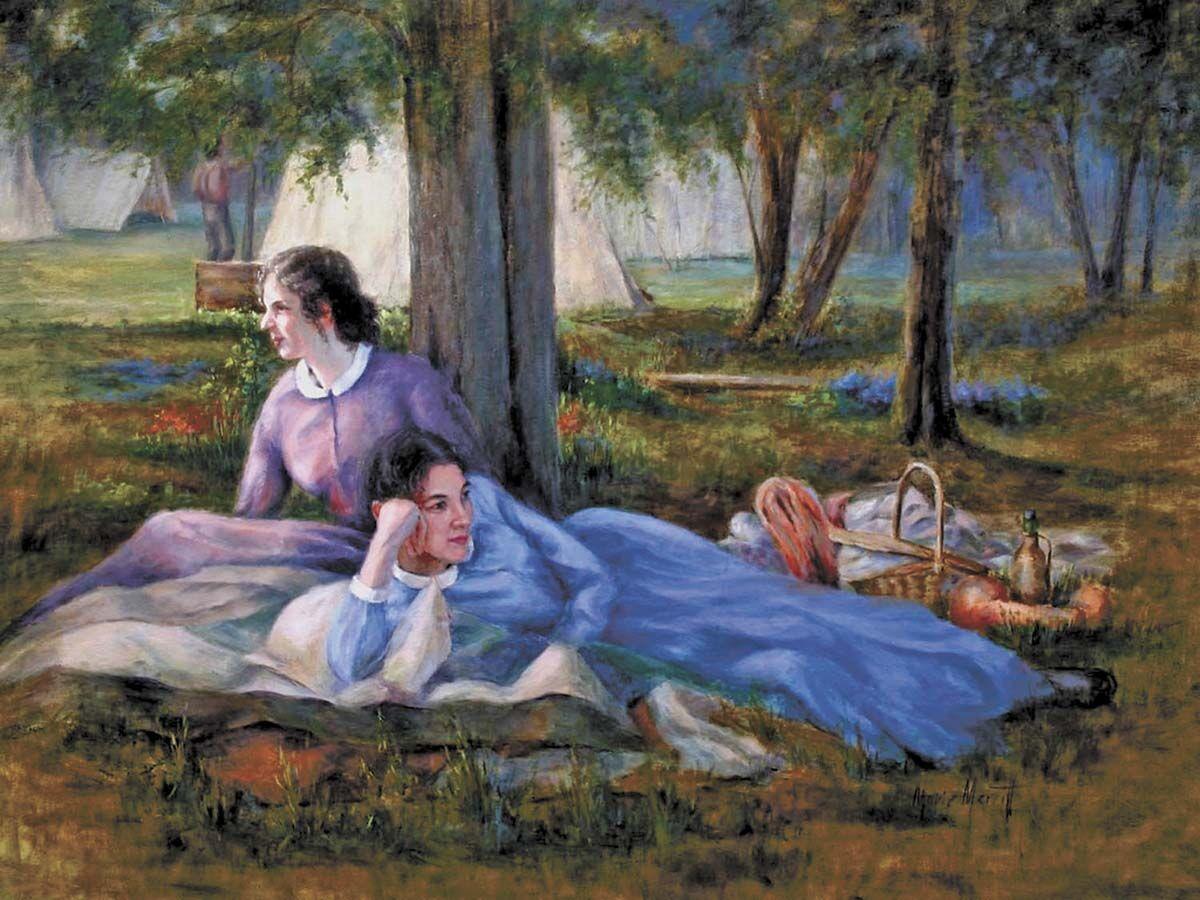 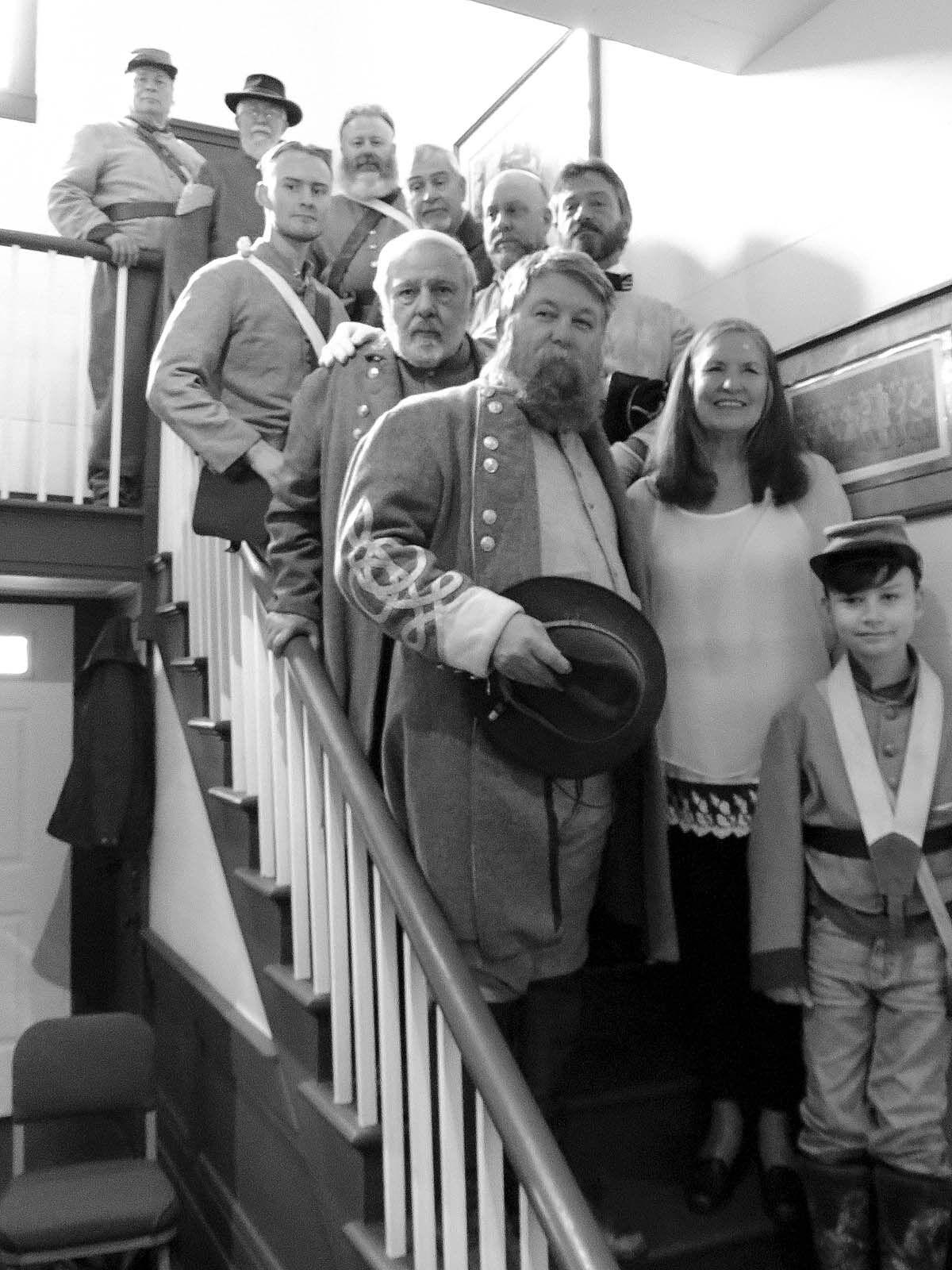 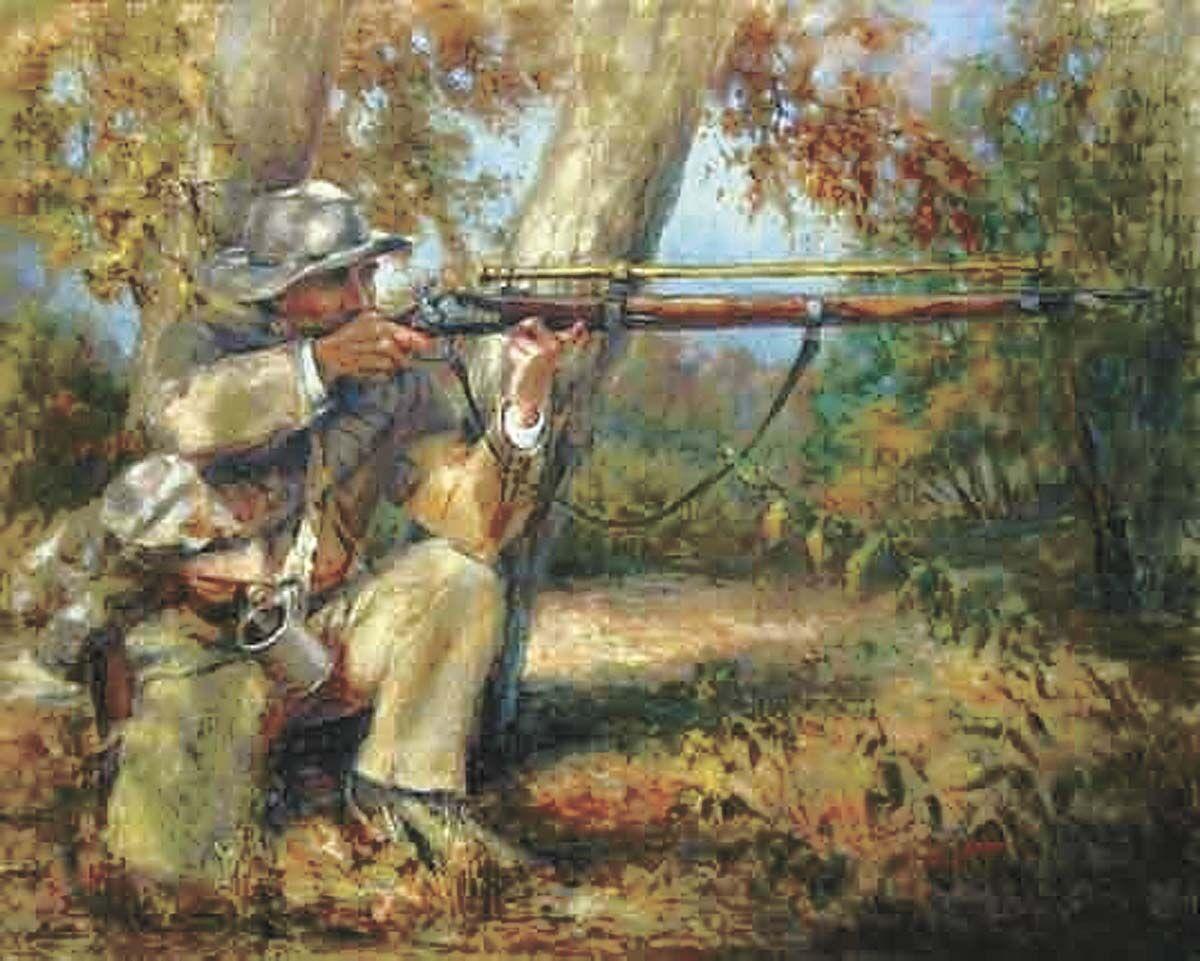 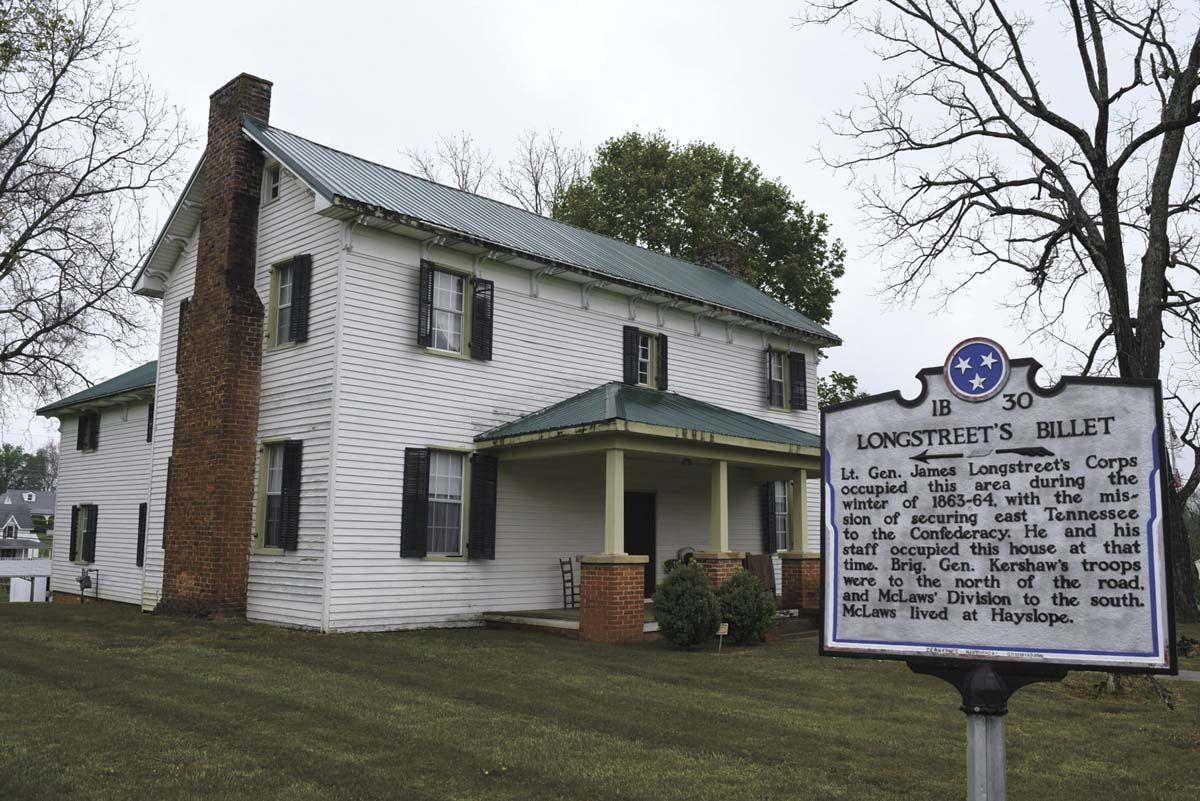 There is a saying that my mother used to say. It goes, “April showers brings May flowers”. The showers of April 24, 2021, did not dampen the spirit of the art exhibit, featuring the fantastic work of Mrs. Marie Merritt. In spite of the rain, several people came out to peruse and purchase some of her outstanding work relating to the War Between the States.

The Longstreet House Museum (5915 E. Andrew Johnson Hwy, Russellville, TN 37860) was the location of the art exhibit. Those in attendance were privy to meeting the artist, looking reflectively upon her work, and touring the house and grounds where General Longstreet held his 1863 Winter Campaign headquarters. One could not help but feel the presence of men and women of yesteryear while standing upon the sacred soil and walking on the plankton floors of history.

According to Mike Beck, organizer of the event, the house belonged to the “Nenney family and after the Battle of Bean Station was used as General Longstreet’s headquarters during the winter of 1863, where he planned and executed battles at Mossy Creek, Dandridge. and Fair Market.” This was the setting of Marie Merritt’s art exhibit.

I first met Mrs. Merritt at the reenactment of the Battle of Barbourville. As is my custom, I offered a prayer for safety for all the troops while kneeing to God. After the battle she came to me. She stated that she was inspired by my pose and if I could recreate the scene. I agreed to so not realizing that she would capture the very essence of men praying on the field in their ‘hour of decision’.

Once the project was completed, I was invited to one of her exhibits in Greenville, Tennessee. I was in awe and humbled by what she had captured on canvas. Before me was the image of a soldier seeking guidance and safety for himself and those under his command. I was mesmerized by the colors of the background, the clarity of the surroundings, the details engrained within the confines of the painting, and the emotions depicted of a man on the field of battle praying. Her representation on canvas transcended a lone soldier, but rather enshrined a glimpse into the heart of so any soldiers that fall to their knees seeking God’s presence before rising to face the foe. I have been an avid fan of her work ever since that moment.

Her passion for her profession is evident as seen through her work. Mrs. Merritt draws her inspiration from the ‘Rich history and heritage of east Tennessee and southern Appalachia”. Through her artisan’s eye she transform the beauty of nature, landscapes, people, and places on canvas. As stated on her website, Mrs. Merritt “Keeps with a theme of tradition, using careful combinations of transparent and opaque oil paints, applied in time-honored techniques reminiscent of the old masters, to set a mood of reflective observation.”

Her numerous accomplishments and accolades are quite impressive. She is a member of the Oil Painters of America, Society of Decorative Painters, Tennessee Art Association and United Artists. In 2003, she was the recipient of the coveted Certified Decorative Artist (CDA) from the International Society of Decorative Painters. In 2002 she earned the Teacher of Decorative Arts (TDA). She is a Charter Certified Instructor for Genesis Artists Colors and a graduate of the University of Tennessee. She is a sought-after teacher at national and international seminars and conventions.

Her work has been featured on the cover of the book entitled, Legend and Legacy of Lee, Decorative Painter Magazine and AMAC Annual Catalog. Her awards include the following: Virginia Highlands Festival HM, MAA Award of Merit, Grainger Tomato Festival Best of show, and RTDP Best of Show. Her juried exhibitions include Knoxville News Sentinel Gallery, Dogwood Arts Festival, Art and Culture Alliance, and Art Market Gallery. She has several works of art hanging in corporate offices as well as private collectors across America. She also has painted a gorgeous mural in her home church. Being of a humbled heart, she gives credit for her talent to our Almighty God from which all blessings flow. She has been a blessing to this writer as well as to thousands who have had the honor of meeting her. Well done thy good and faithful servant.

For further information regarding Mrs. Marie Merritt’s work as well as the projects of the Longstreet House Museum, go to the following websites: https//www.Marie Merritt, Historic Artist of Southern Appalachia; and/or https//www.General Longstreet Museum