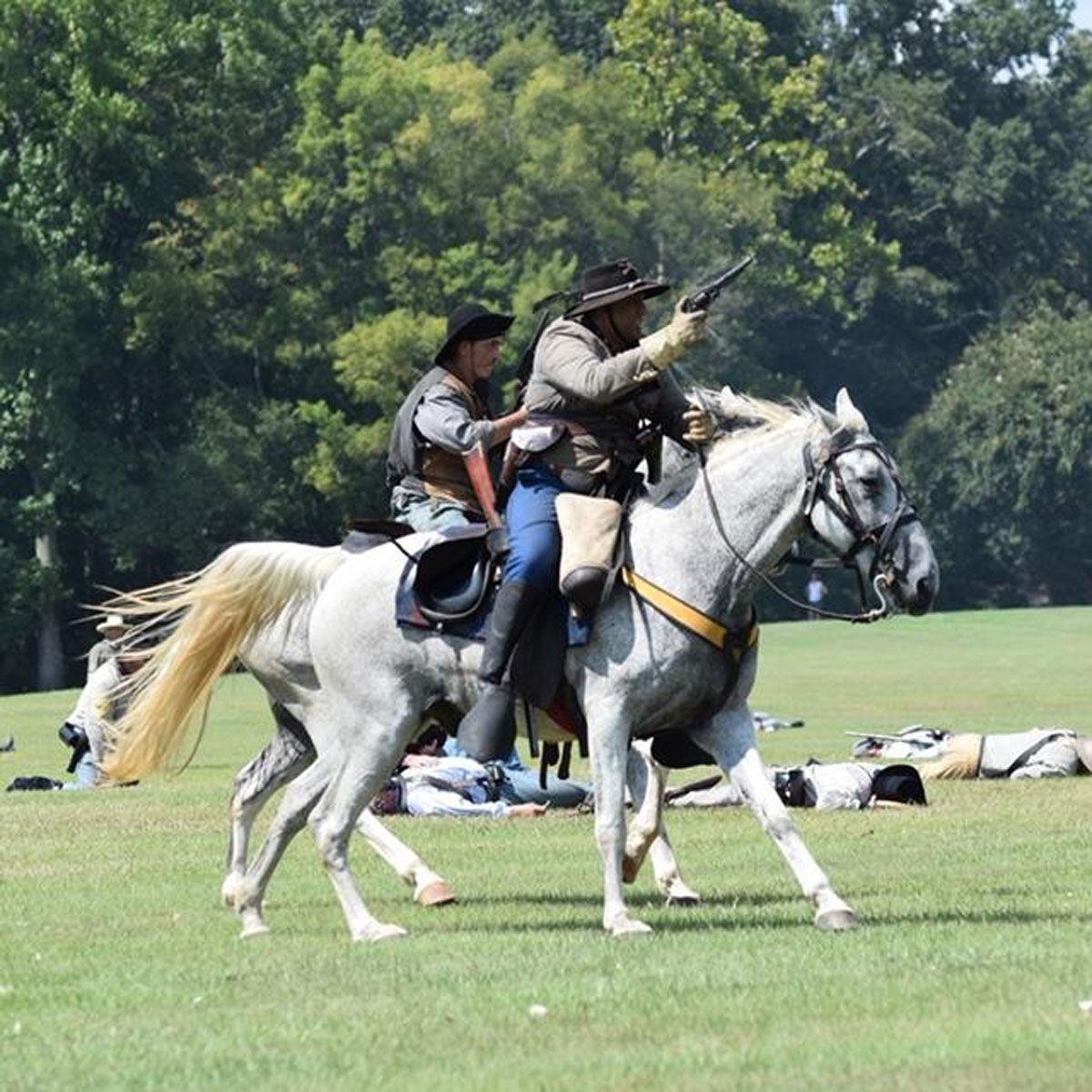 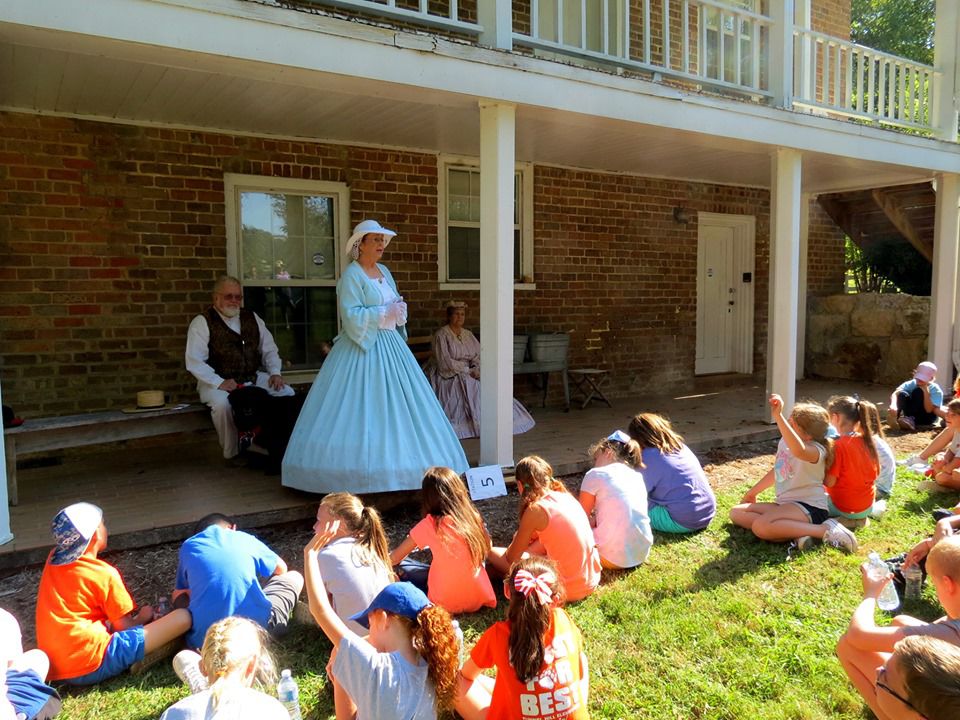 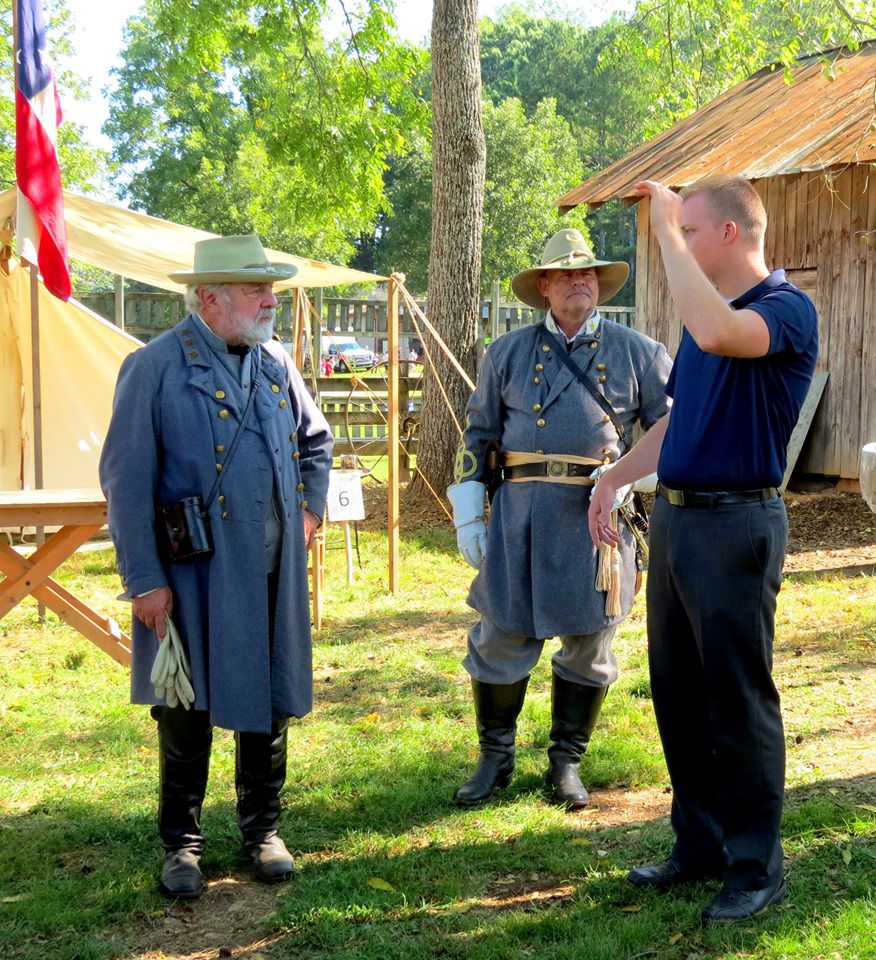 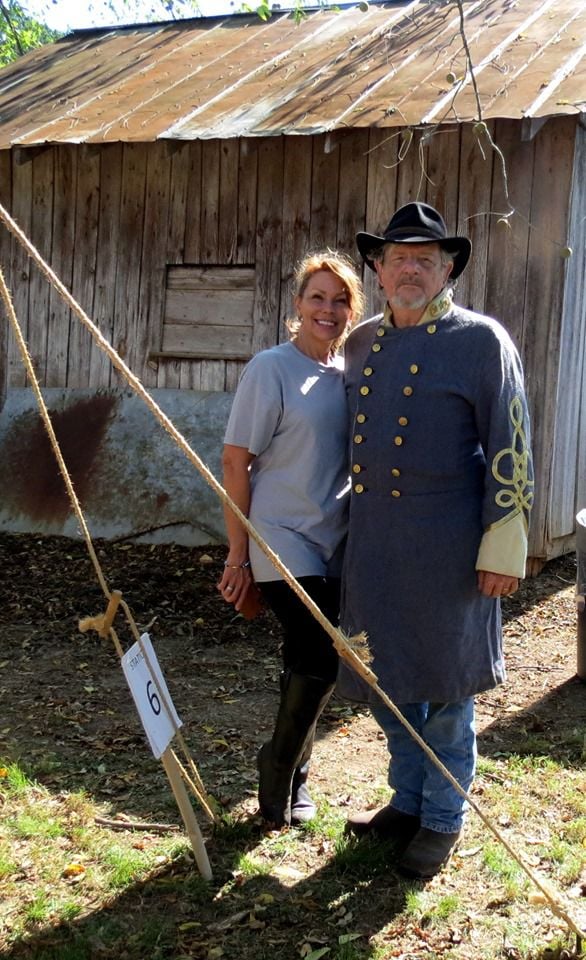 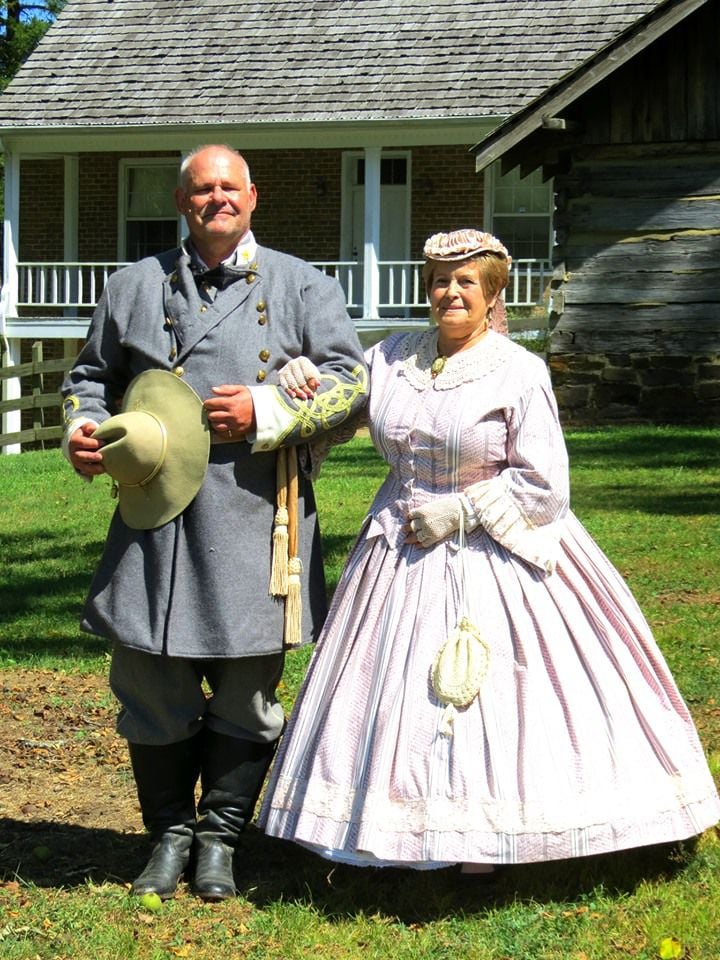 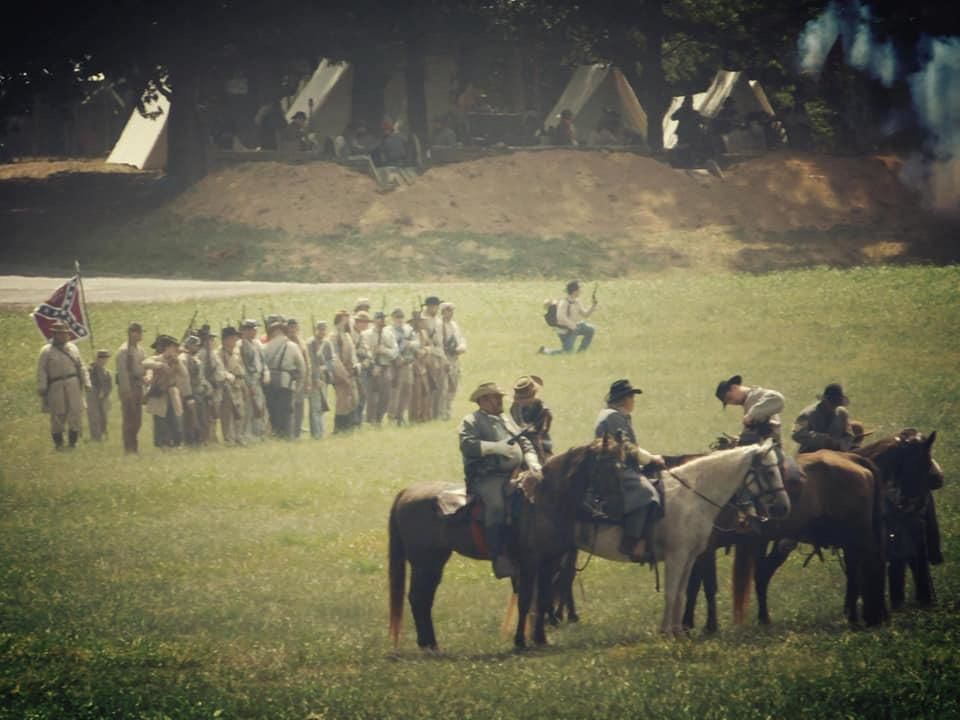 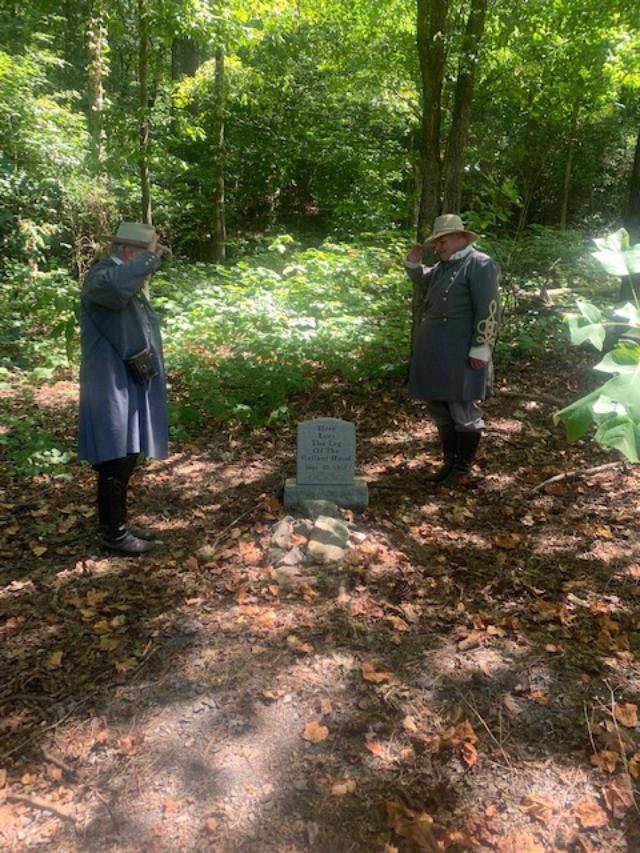 The Battle of Tunnel Hill

Till shouts of victory reach the sky And thou art free, my Georgia!”

As one enters Georgia via Interstate 75, a sense of history seems to ride upon the wind. There are so many locations that designates a historic site, battle or building. Such was the feeling of anticipation as we entered upon the original battle sites, camps and winter quarters of Polk’s Brigade (Army of Tennessee).

The eighty-five acres of preserved land at Tunnel Hill has been preserved for prosperity by visionaries.

On the property is General Sherman’s Headquarters (Austin House). The famed Western and Atlantic Tunnel where the great train chase of 1862 is also located there and is a featured attraction for the outstanding museum situated at the entrance to the preserved land. Just a few yards away from the old mercantile store is the actual burial spot of General John Bell Hood’s leg he lost at the Battle of Chattanooga.

History abounds on the sacred soil where the annual reenactment of the Battle of Tunnel Hill takes place!

On September 6, 2019, the seven stations hosted over six hundred fourth graders and a few home school students of different ages.

A private from the 52nd Georgia Infantry, and Graham Reed of McClungs Battery put the students through basic training and provided ‘wooden’ weapons so they could learn the basics.

The sutlers were open for business and could enjoy Doc Bell’s Root Beer, Lacy’s Sutlery, Irish Pub, Blacksmith working his trade, and Rocky Top Sutlery with Richard Fowler. SCV tents (Joseph Johnson) and the State of Dade were talking to the children and adults. Station 9 and 10 housed Mr. Steve Hall (Tunnel Hill Historical Foundation and staff) along with a lively discussion/presentation about the Western & Atlantic Railroad. Everyone went away from school days satisfied and possessed more knowledge of the era.

On Saturday, reveille was at 7 a.m., followed by morning colors at the perspective camps. Officers call along with morning reports were structured and well attended. Safety and security were emphasized. Orders were given for the company and battalion to drill in preparation of the looming battle. A lovely ladies tea was held under the shade of the walnut trees and I could not help but think of General Jackson’s last words.

The prelude to the battle included safety inspection. President Davis (Scotty Myers), General Lee and Major Harris interacted with the crowd to get them prepared for the adventure. The wondrous music of the 5th Alabama Regimental Band played in the background. Rick Revel was the narrator and shared the following battle scenario.

Wrapped in history, the re-enactment at Tunnel Hill, echoed in the hills of Georgia once again. In a reduced scale, the action took place on the actual battlefield where William T. Sherman of the Army of the Tennessee did battle with Patrick Cleburne of the Army of Tennessee on November 25th, 1863. Even some of the Confederate infantry re-enactors camped on the original campsite where Brown’s Tennessee Brigade once pitched their tents.

At 2:00 PM on Saturday, September 7th, Confederate pickets approached the old homestead cabin in the center of the field in plain view of the spectators who were watching at a safe distance near the Clisby Austin House. The residence of the small structure wondered outside to observe their visitors dressed in butternut and gray. In distance the sound of fife and drum reverberates throughout the woodlands which alerts the Confederate skirmish line that the enemy approaches.

Within moments the Union troops breech the wood line and march onto the field. Deploying his troops promptly, the Union commander sets his sights on the southern boys at the homestead. Crouched behind a split rail fence, the band of skirmishers prepare to hold their ground until re-enforcements can arrive. The blue clad soldiers split into three separate units and maneuver in order to flank their enemy at the homestead. Fearing for their lives the occupants of the cabin scurry and seek refuge at the Austin House.

Desperate to show their mettle, the Confederate skirmishers open fire and the battle is under way. Finding themselves surrounded on three sides and receiving cannonade from a Union battery, the outnumbered southerners begin to wither. Confederate cavalry answers to the call of gunfire, but due to the sheer numbers of their enemy, they cannot rescue their comrades at the homestead. Being driven back by heavy infantry fire and enfilading canister from artillery, the Confederate cavalry withdraws to a distant hill while their fellow skirmishers are engulfed.

Destroying his light resistance at the homestead, the Union commander sets his sights on Fort Keys, where CSA artillery has been trading shots with the Federal guns. The only thing standing in his way is the enemy cavalry and a lone battalion of infantry that has marched onto the field to challenge his position. Holding the high ground at the cabin, he advances a battalion of his own men to sweep the field of the rebel scourge. Leaving only a small detachment to protect his rear, he proudly advances to finish his task.

Fully committed to annihilate his foe, the Union commander soon finds himself in precarious situation. Overextending his lines, he realizes that he has fallen into a trap and is soon being flanked by two fresh battalions of Confederate infantry. Fearing his flanks will melt away, he begins to fall back to the homestead. Arriving back at that precious piece of real estate, he is now faced with a new problem. His rear is being attacked by more rebels and casualties are adding up quickly in his ranks. To avoid being overrun, he calls for a retreat near to the right of his artillery. Left with no choice, he attaches his white handkerchief to his sword and waves it high. A parley is soon underway. Reaching an agreement, the Union troops march from the field, leaving the Confederate commander the victor of the day.

After the battle, a tribute to our American front-line heroes (Military, Law Enforcement, Medical & Firefighters) was offered, along with gratitude from those present. The crowd was invited to speak to the reenactors, living historians and to visit the camps. The camps closed at 6:00 and everyone prepared for the period ball (period attire required). The ball was a total success with the amazing music of the 5th Alabama Regimental Band enriching the mood and helping make it an event to savor for years to come.

Sunday’s schedule followed in the footsteps of the day prior except for church services being held in the perspective camps. Again safety on the field was emphasized. The spectators were privy to another outstanding presentation of our American legacy and left with a deeper appreciation for our God, Country and the blessings of being an American.

After receiving re-enforcements and a fresh supply of munitions overnight, the Union commander decides to try once again to attack Fort Keys. At 2:00 PM on Sunday, Yankee fife and drum are heard in the timberline and Confederate skirmishers take their place at the homestead. Low on ammunition, the southern forces are facing a daunting task. Undoubtably outnumbered and only a handful of cartridges per man, they will show their dash and dare for Dixie.

Splitting his forces into two battalions, the Union commander easily sweeps the rebel skirmishers from the homestead with one unit, while the other enters the field to the left of his artillery battery, which now forms the center of his line. The Confederate commander throws a rag-tag battalion to protect his right flank and sends his cavalry to the left to try and retake the homestead. Placing his strongest infantry force to his center, the southern colonel hopes to split the Federal line and weaken his enemy’s advance. Taking the bait, the Union commander pushes forward and is caught in a vicious crossfire. Falling back to regroup, he orders his artillery to demolish the Confederate center. Dutifully so, the US artilleryman bombard their enemy until they begin to fall back with heavy casualties.

Seizing the moment, the Union commander drives his troops forward as the Confederates reach into empty cartridge boxes in dismay. With a gleam in his eye the Federal officer senses that Fort Keys could be his if he is persistent and persistent, he is. Out of pistol rounds, rebel cavalry fades into the distance and their infantry falls back with the walls of Fort Keys. Pausing briefly to regroup his troops and fix bayonets, the Union commander calls out one last order to his men. “Storm the ramparts men!” With a loud huzzah, the Yankee horde follows its colors in mad charge toward the earthworks of Fort Keys. The battered Confederates fire their last round as the boys in blue surge at the double quick, with bayonets glistening in the sun. In a matter of a few strides, the Federals are breeching the walls of the redoubt and soon the Union colors are planted on the earthen wall. Then two heartbeats later, all the weapons on the field go silent and the bugler sounds taps.

As this fielder left the 155th anniversary of the beginning of the Atlanta Campaign, a sense of thankfulness overcame me. To all those who participated and sacrificed their weekend to enlighten and educate other we offer you our heartfelt thanks. To the Alabama Division of Reenactors, Ken and Sandy Sumer, the 35th Tennessee, the 18th Alabama, the city of Tunnel Hill and the Tunnel Hill Historical Foundation we offer a special salute of gratitude. This, my friends, is what a reenactment should be: in fact, I won’t call it a reenactment, I’d rather call it a reunion.