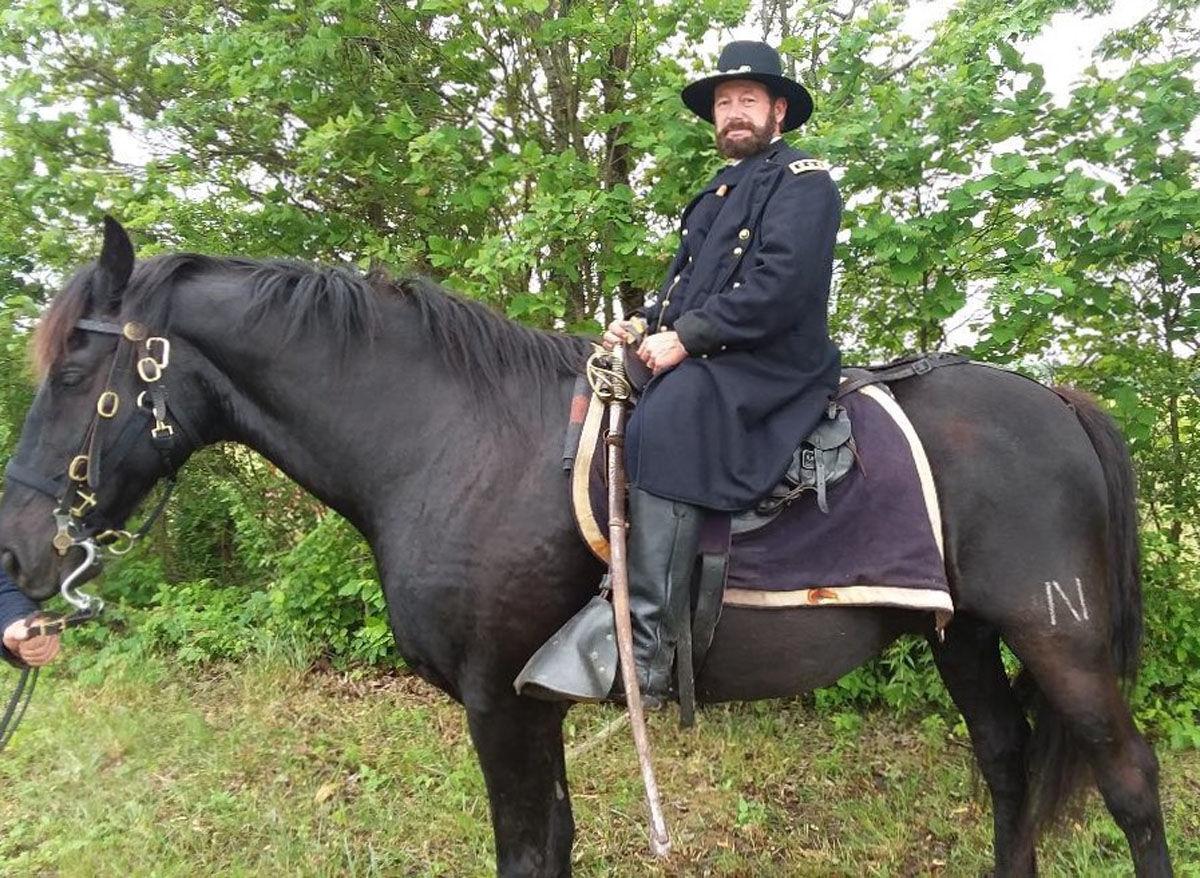 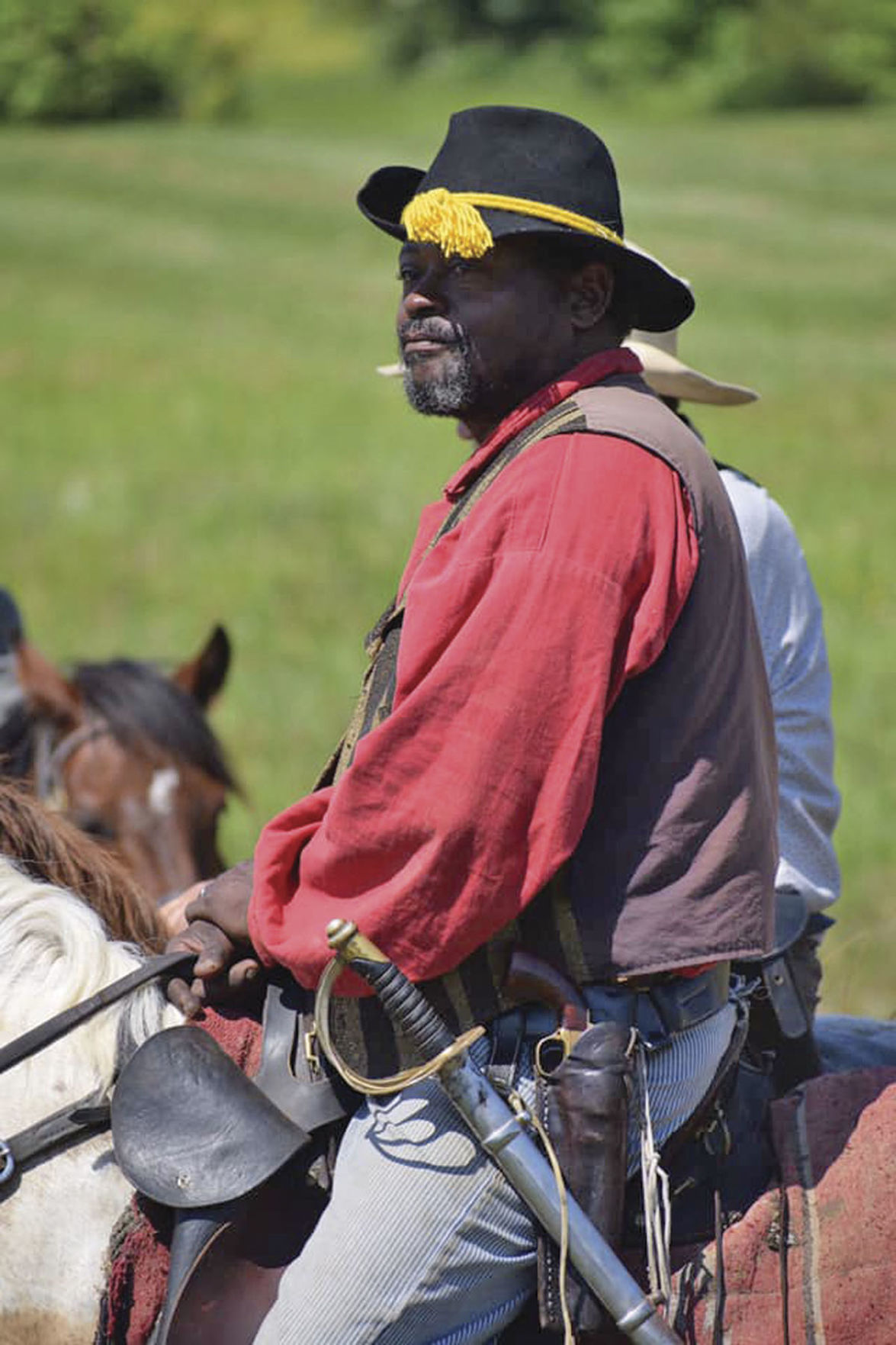 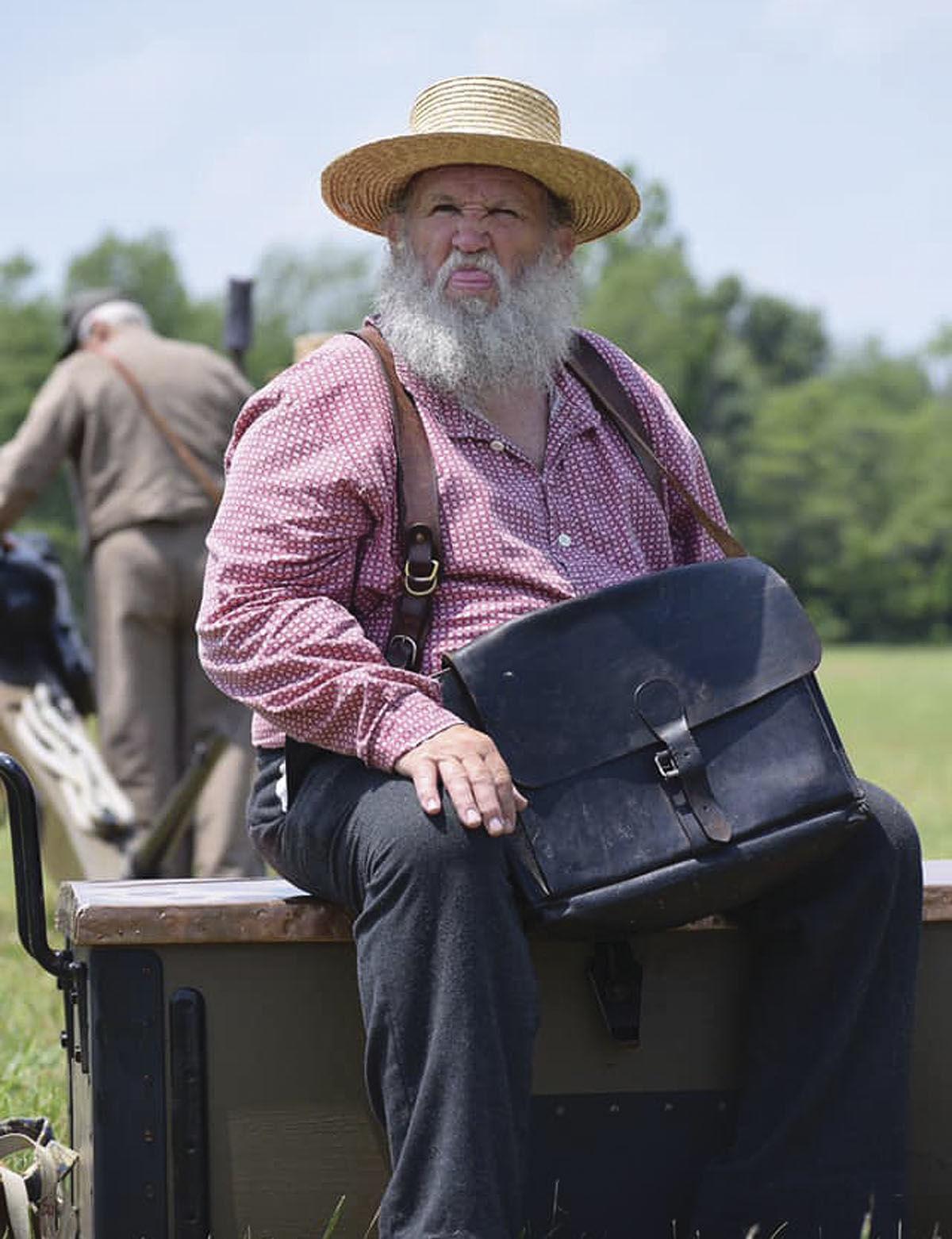 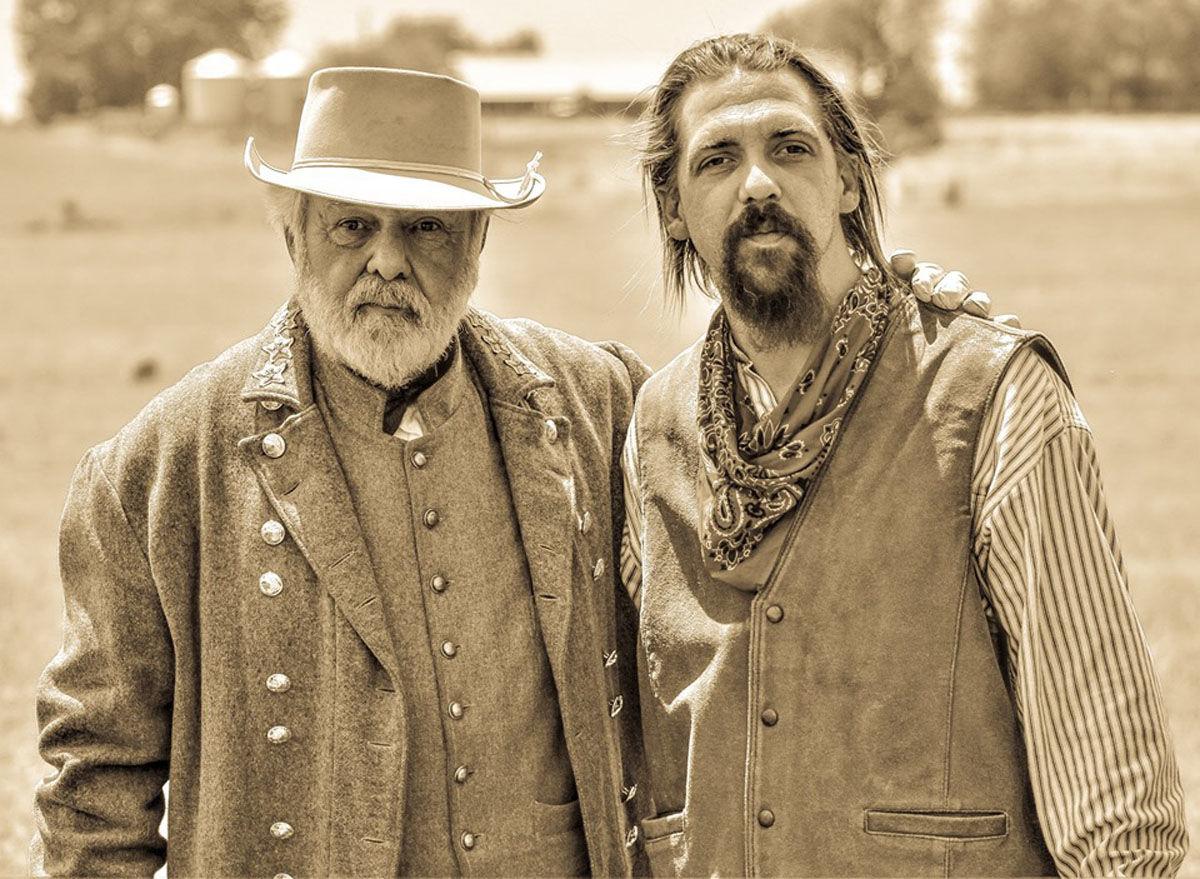 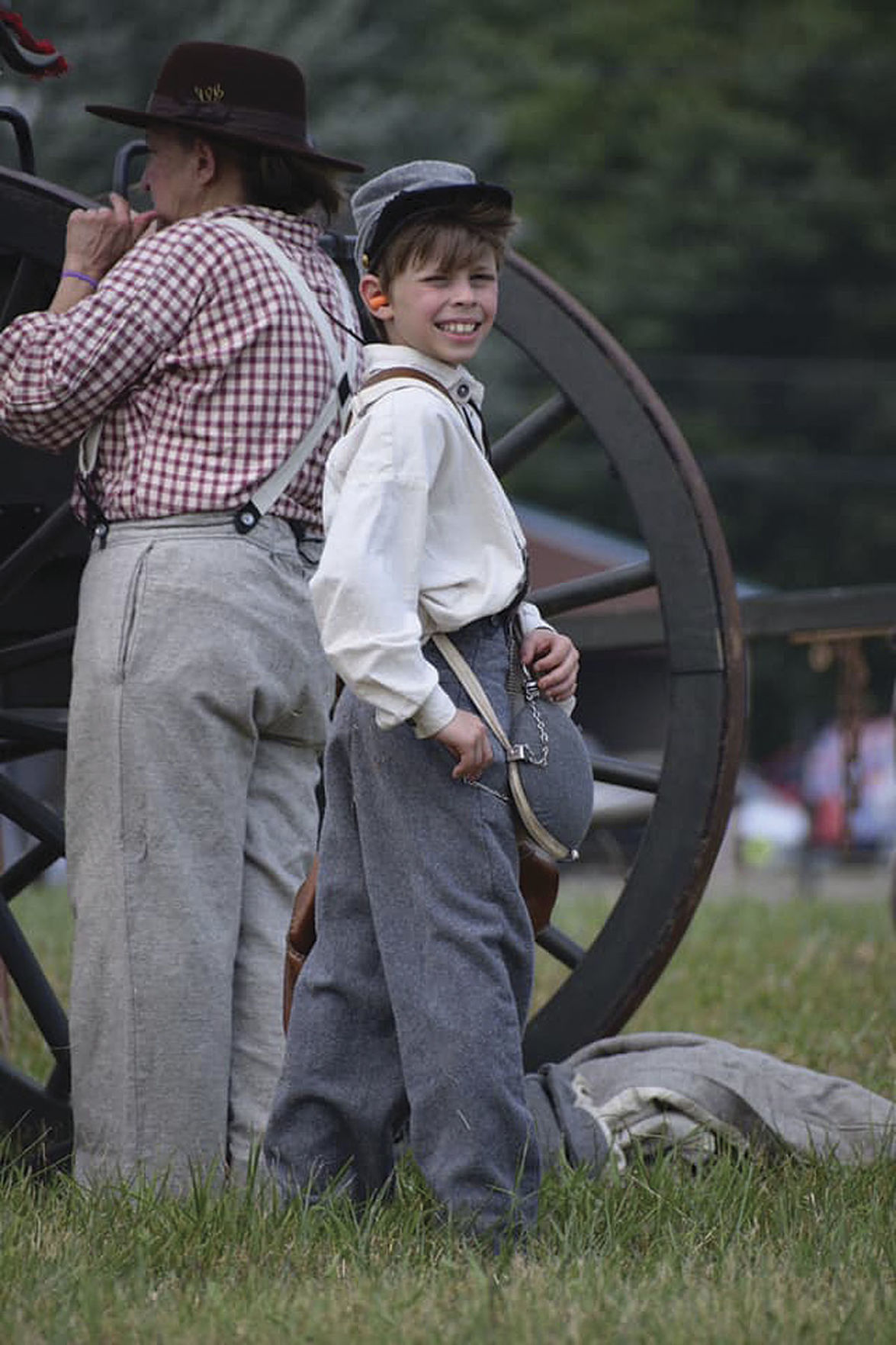 Ever wonder what makes a great event and why it is so successful? I have attended a particular event 17 out of the 25 years of its existence. Somebody asked me why I drove over six hours to this reenactment. I answered the question with several questions, and therein is the answer. Where else do you go to a reenactment and be taken anywhere in town in chauffeured limousines? What event do you see the whole town proudly displaying the American flags flown during the War Between the States? How many events have you heard of that a feast is prepared (fit for kings and queens) that is courtesy of the local churches, businesses and the town? In what other locations are you treated as royalty and genuinely feel welcome to the town? Where can you go to witness a first-class action-packed battle scenario so well-orchestrated? At what event can you enjoy a first-class tea, listen to living historians and reenactors, along with honoring our ancestors through memorial services, film crews from France and Germany filming a 90-minute documentary on the event? The answer is simple: It is at the Battle Sacramento, located in Sacramento, Kentucky.

Throughout the weekend, the 25th annual Battle of Sacramento had numerous activities on this year’s agenda. Civil War Camp Music was performed by the 52nd Regimental String Band. They have several accolades to their credit and hail from Memphis, Tennessee. Reverend and Faith Farley offered tracks and talked of the U.S. Christian Commission’s mission during the war. They also brought a marvelous coffee wagon. The wagon was patterned after the patented design (March 24, 1863) by John Deaton. The wagon was pulled by a team of horses and possessed multiple boilers with their own chimney and firebox. The coffee wagon was said to produce 108 gallons of coffee an hour. The Farley’s gave out coffee and hot chocolate to anyone wishing to have a cup that was brewed via the coffee machine.

A collection of period firearms were on display at Dr. Richard J. Gatling’s tent. Dr. Gatling (portrayed by Mike Marsh) possesses a wealth of knowledge about them. He also had a Gatling gun on display, and shared the concept of the rapid-fire machine as well as a demonstration of its fire power.

A school of the soldier was conducted by Pvt. Dennis Hutchinson. He shared his knowledge of equipment and uniforms with ‘recruits’. During the weekend, young spectators were ‘recruited and instructed on military drill. Soon they were marching to the sound of barked commands. Henry Clark Madi Weddings) shared her amazing story as an undetected female soldier. Sgt. Frederic Miller demonstrated the bugle calls of the time. President Lincoln (David Wolfe), General Grant (Charles Michael) and General Lee (David Chaltas) held a very lively discussion of their roles and their lives before, during and after the war. Colonel Dudley Wickersham discussed the cavalry’s role and equipment. Colonel Chamberlain (Brian Waite) of the 20th Maine gave a rousing speech to the crowd.

A one act play was performed. It was titled, Reflecting on the War. At 7 that evening, a Lantern Tour was given and talks of hauntings and history filled the air. Officer’s call was held on both days prior to the battle. During that time the scenario was reviewed, revisions made and safety issues discussed. Dismounted Cavalry by Pvt Mark Gelhausen demonstrated equipment and tactics of the time. A special presentation regarding WWII Calvary Scouts was provided. An encampment featuring equipment of WWII was also on the grounds. Cowboys and cowgirls meandered around the grounds holding shoot outs and demonstrations of their skills.

A fascinating Calvary Contest was held on the field. The event entailed pistol and saber attacks on targets, jumping hay, turning and slicing of watermelons with the saber. Points were deducted if a trooper missed his/her target. There was a Best trooper award given out. The event was sponsored by the Century Division Order of the Spur.

The ladies and social was well attended and quite eloquent. This year’s theme was remembering December 28, 1861. After the invocation by General Lee, Sue Berry discussed the battle. General Lee shared the story of a father who unknowingly shot his only son who was fighting on the other side. The tea was a complete success and as usual, well planned.

A moving tribute to those reenactors who had crossed over the river during the past year was offered. Overall battle Commanders Steve Glaza and Bear Whitworth set the solemn tone for the memorial service. Names of those who passed were spoken and tokens were placed on or beside the empty chair and table.

This year’s dedication of Mollie Morehead was held in spite of a downpour. General Lee reminded those brave ladies and men that the rain was ‘Confederate tears of gratitude’ for being remembered. It was the first time it had rained during the service in 25 years. Reverend Farley preached a wondrous service on John 3:16 and a couple were saved.

The battles on both days were well attended. The action was hot and intense, as the film crew from France and Germany recorded the action of the Wizard’s First Ride, beginning with the cry of “Ride Mollie Ride!”

Mary Susan (Mollie) Morehead was born in McLean County, Kentucky, on March 16, 1843. She was the daughter of Hugh N. and Elizabeth Morehead. She had four siblings. One of her younger siblings was named Sarah. The family moved to McLean County, Kentucky, in September of 1861. They owned one hundred fifty-eight acres on Cypress Creek. They had just settled on their farm when the drums was heard in and around the area of McLean County.

On December 28, 1861, only three months after they had moved, Mollie and Sarah (also known as Betsy) were riding down Sacramento Hill on a family errand. Mollie and Sarah noted Federal Forces watering their horses and knew something was about to happen. They both were aware that a Confederate force was in the vicinity. Mollie sent her sister towards their farm to warn their parents, as Mollie agalloped to find the Confederate Cavalry.

Mollie located the soldiers, who was led by a newly appointed Lieutenant Colonel by the name of Nathan Bedford Forrest. Two men that were privy to witnessing the event, stated they were met by a, “Beautiful girl, riding rapidly, her features glowing with excitement, her fallen tresses swayed by the air, who reported that, returning from the village ahead, she had been obliged to pass through the Federal column, which was but a short distance in front. This was a Miss Morehead of the neighborhood. Deeply sympathizing with the cause of her section, and excited by the waving of her hat in the air, she urged the Confederates to ‘hurry up’ and rod back at a gallop for several hundred yards by the side of Colonel Forrest, before she was induced to return. Such was the spirit which animated so many southern women.”

Another eyewitness account given by Captain Adam R. ‘Stovepipe’ Johnson said, “There came into view a young woman on a bare-back horse, wildly dashing up, frantically waving her hat. Her long hair was flying in the wind like a pennant, and her cheeks were afire with excitement. She exclaimed, “There the Yankees are! Right over there! She pointed over the hill whence she had just galloped. Mollie, just eighteen years old, had gotten their attention and wheeled her horse to ride beside the leader of the column who was none other than Lt. Col. Nathan Bedford Forrest. Somewhere in the frenzied minutes that followed, with urging from Forrest, Mollie disengaged, and the Confederate forces mixed it up with the Yankees.”

Even the fabled Nathan Bedford Forrest recalled Miss Mollie with affection in his after-action report. “A beautiful young lady,’ he wrote, ‘smiling, with untied tresses floating in the breeze, on horseback, met the column just before our advance guard came up with the rear of the enemy, infusing nerve into my arm and kindling knightly chivalry within my heart.” So a young lady of eighteen years helped catapult Forrest into the annals of history.

For more information about next year’s event, go to the following: