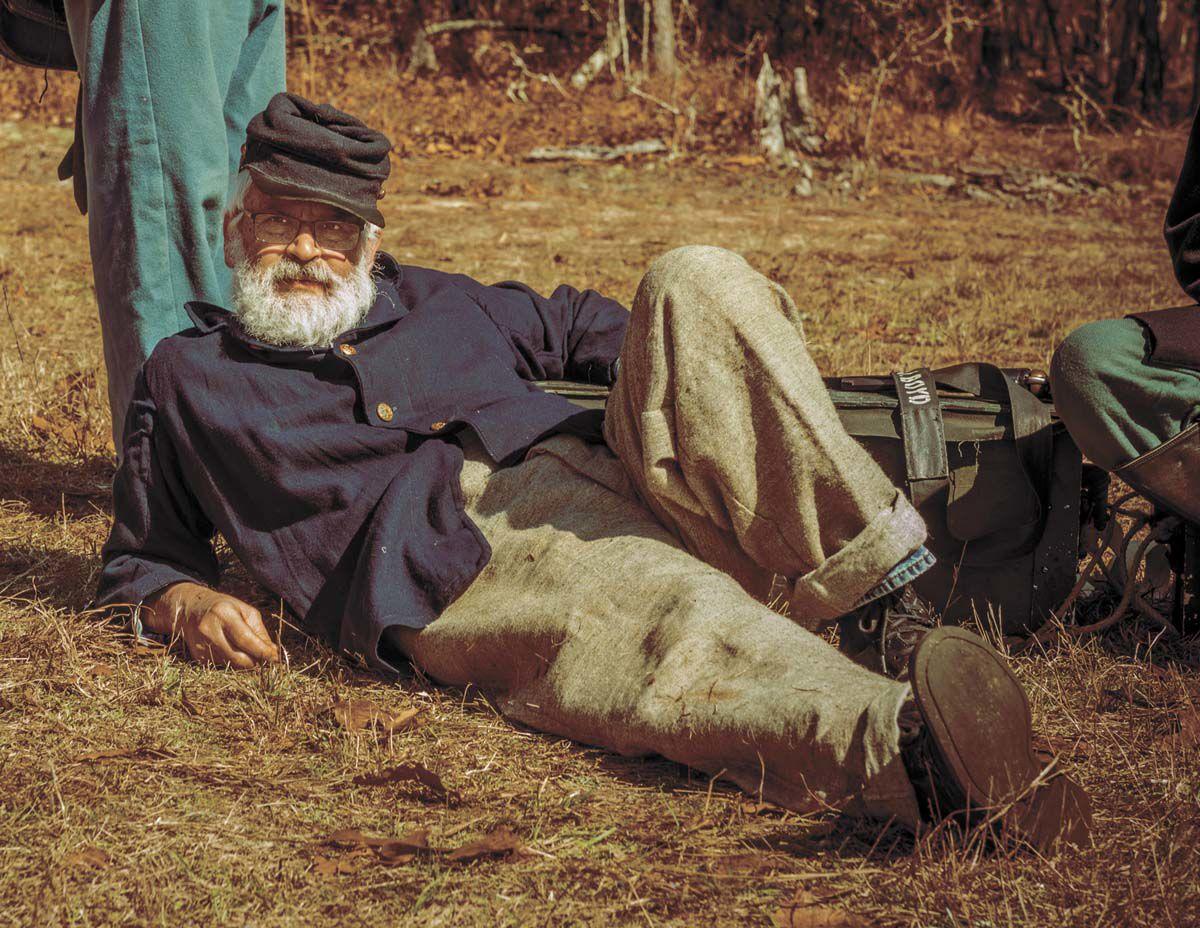 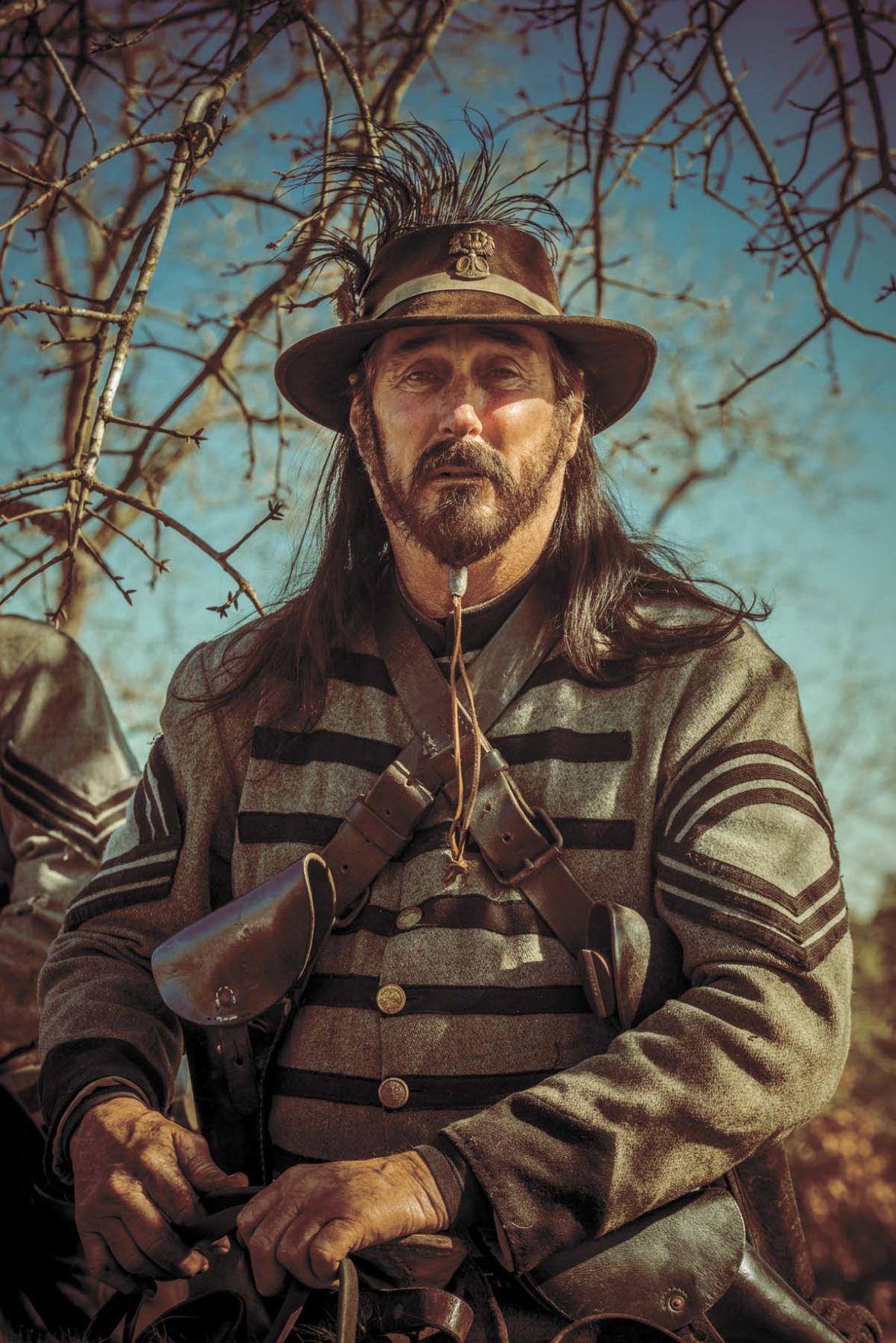 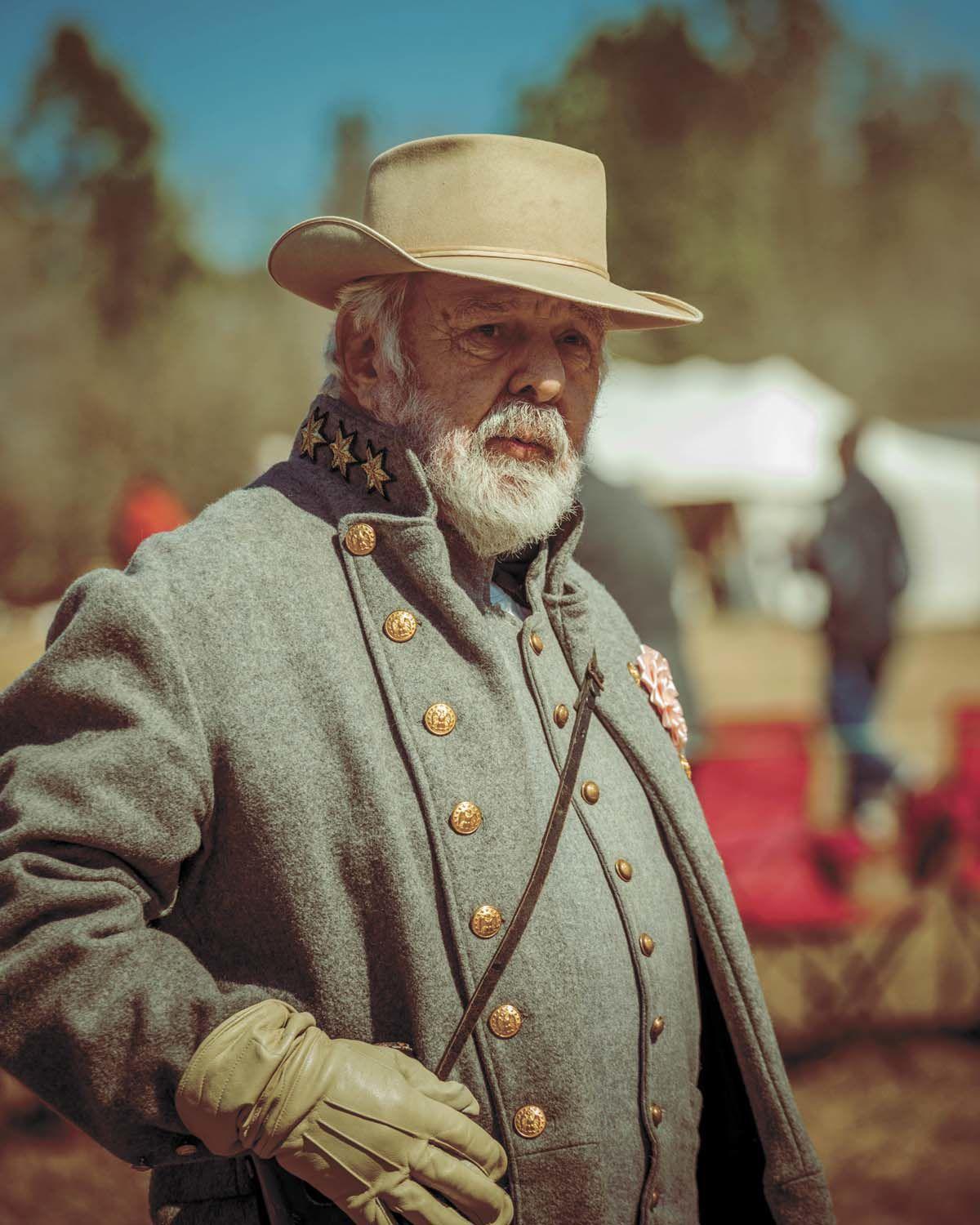 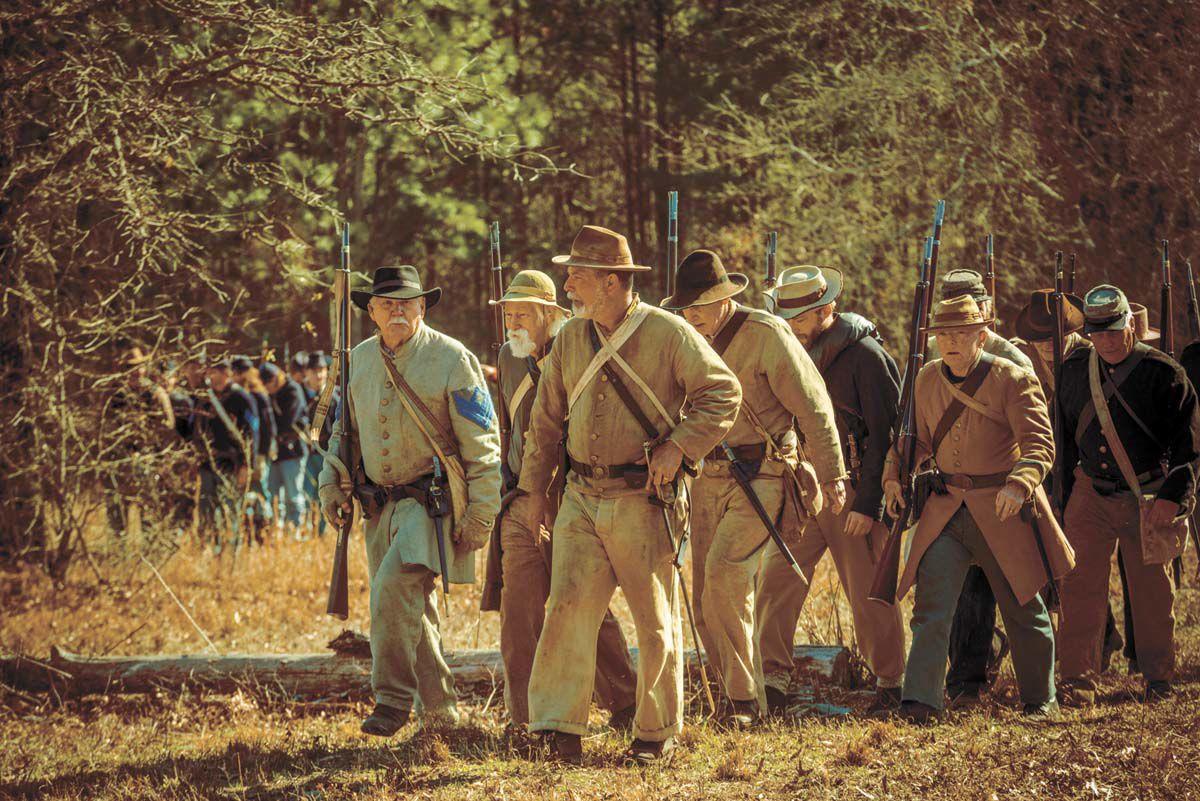 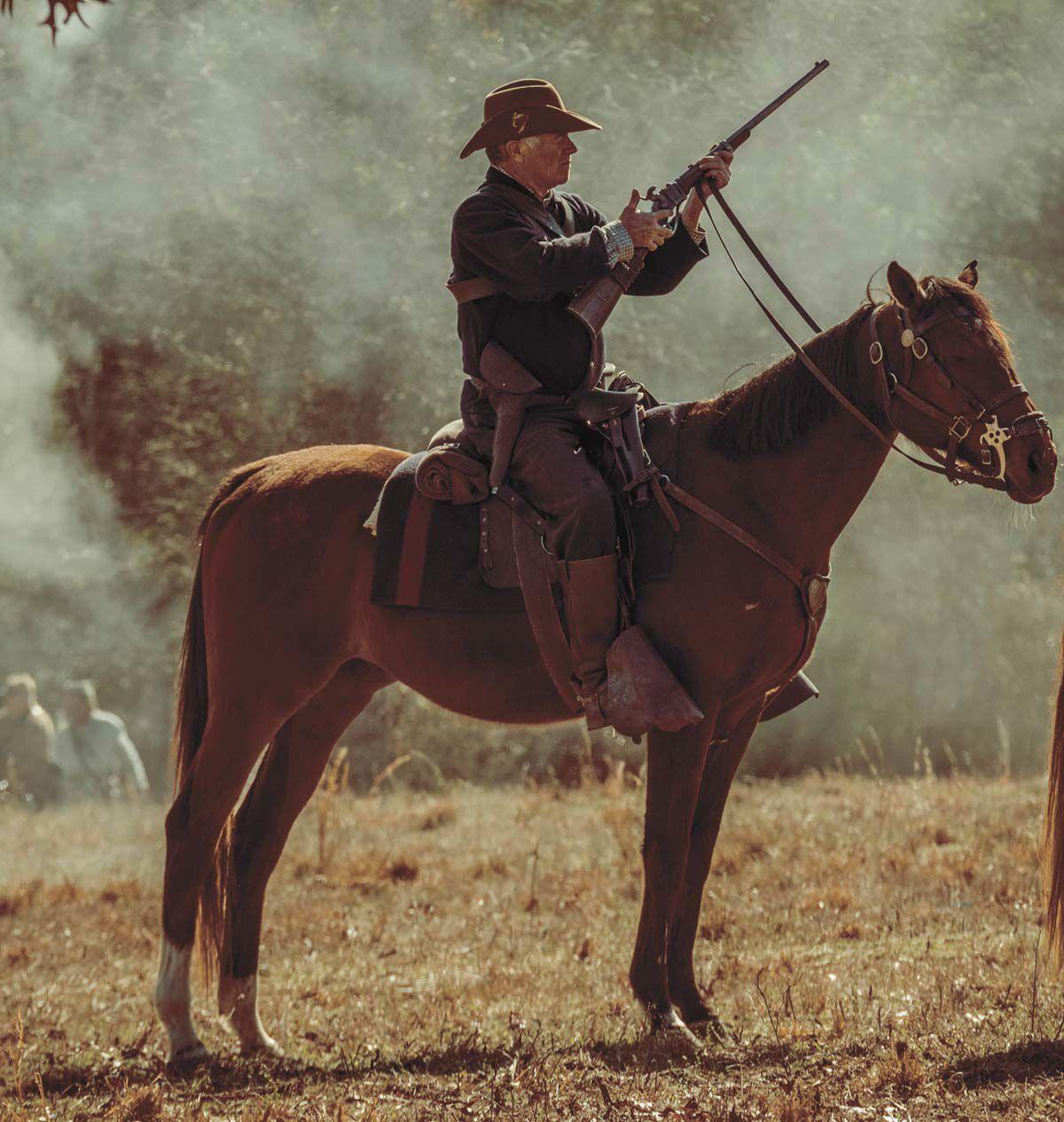 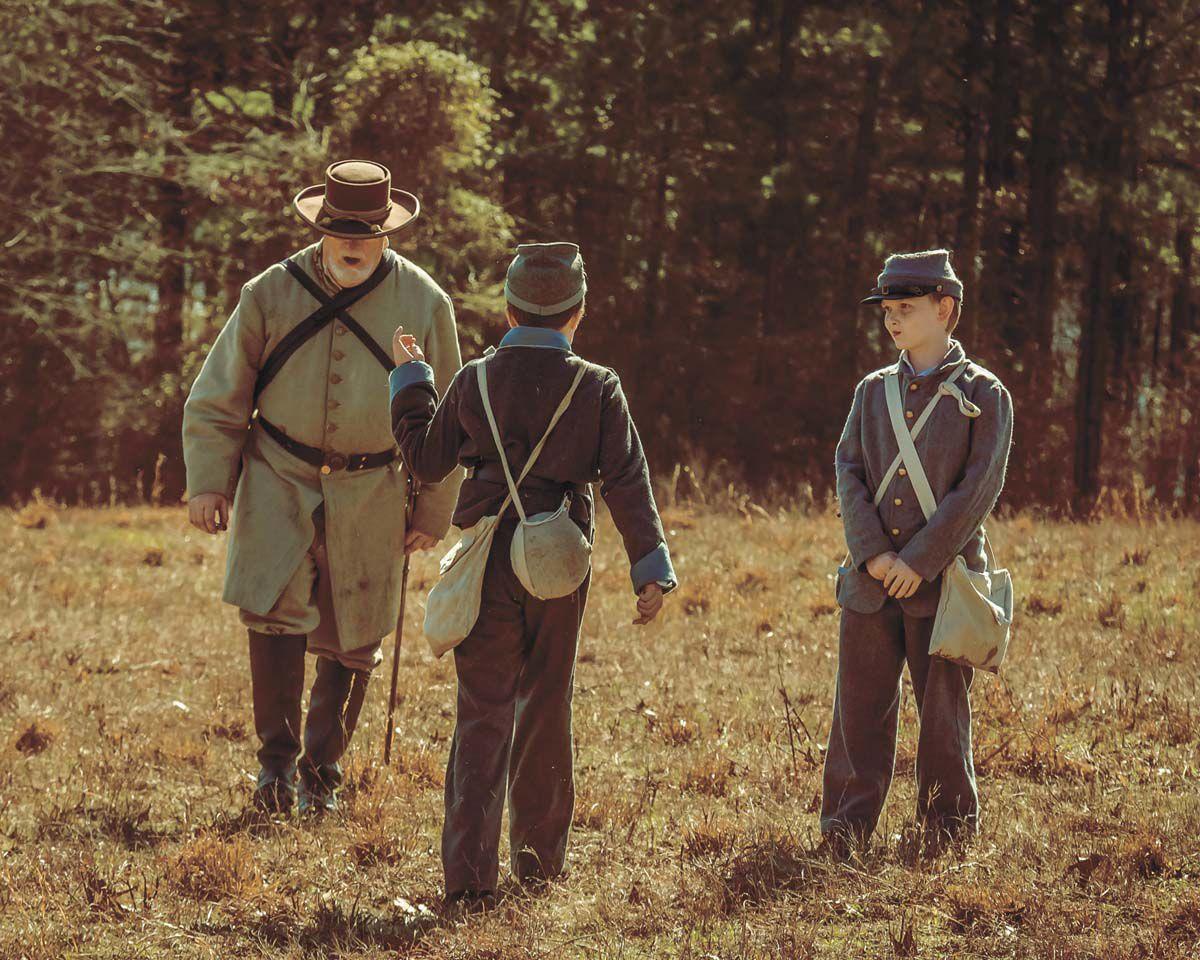 Over the course of twenty-seven years I have attended numerous reenactments, dedications, memorial services and offered presentations to different organizations and churches. I have found that each event presents a uniqueness and sometimes a surprise. Sometimes the unexpected occurs and presents everyone with a blessing. This was the case at the 26th recreation of the Battle of Aiken. The surprises came in threes!

The first surprise and blessing was during Friday’s school day. Hundreds upon hundreds of children came to the battle site to learn. There were numerous stations inclusive of but not limited to a period schoolhouse with a teacher, working Blacksmith, Undertaker, military timeline, medical demonstration, crafts, period music, sutlers, soldiers’ encampments, vendors and generals.

I (in the persona of General Lee) was stationed with General Hampton (Eddie Rogers) and General Longstreet (Ed Mann). Group after group came through listening to presentations and asking questions. I was talking to one particular group of Gifted and Talented students about General Lee’s chicken that was named Nellie. I mentioned how Lee acquired it and how the little black hen would follow him around the camp. I shared what transpired at Gettysburg regarding the hen. One of the students asked what happened to Nellie and I simply said she gave the ultimate sacrifice. The students left and we continued offering presentations.

About an hour later, the same Gifted and Talented class returned. They had their heads lowered without making eye contact with me. One of the girls must have been elected as spokesperson. She looked at me and with a mournful voice said, “General Lee, we found Nellie and it’s bad news.” With that she opened her hand an gave me a crisp chicken tender. I tried to maintain my composure and accepted Nellie’s remains with somber dignity. General Hampton commented that Nellie looked delicious! Again I tried to maintain my poise. I thanked them for bringing her back and then asked would they participate in a burial of my beloved pet. They eagerly agreed.

I took a stick and dug a small hole in the soft South Carolina sand close to the fire, but not close enough to char her remains. The students helped place the dirt over Nellie’s crispy remains and then said words over her. A few weeds and sticks were gathered and placed upon her grave. We ended the ceremony in a group hug and as they left, I was once again reminded of the reason we participate in living history and reenactments. Those wondrous children will always remember the burial of Nellie!

The second surprise came in the form of music. On Saturday the pavilion was filled with perfect pitch harmonies and a blending of bluegrass, Celtic and period music that permeated my soul. I quickly walked to the pavilion, and there on stage was four people known as the Band Jubilee.

Their music enhanced everything including the ladies tea, which had over one hundred participants. For more information about the Band Jubilee, go to the following: https://www.facebook.com/thebandjubilee/

The third surprise came at the ball where the Band Jubilee was performing. Right int the middle of the floor, Gregory Newson bent a knee and proposed to his fiancé, Ms. Lisa. The crowd erupted in applause as she said yes! Everyone congratulated the soon to be newly weds and once again the comradery and family ties were renewed.

Just before the ball, a scene was filmed for the forthcoming movie, The Burning of Atlanta. The town front was actually burned as the reenactors scurried around in an effort to save the town while Sherman’s men attempted to burn it.

The sky yielded to a beautiful blue hue as Sunday services began. Chaplain Joey Young offered a wondrous service with Band Jubilee playing a prelude to service. Chaplain Young asked General Lee (Dave Chaltas) to share with the standing room only congregation the story of Maggie Sue, our little general. Prayer opened up the service, followed by more music and then Chaplain Young talked of Nicodemus and Christ. An altar call yielded new souls for Christ and all went away feeling refreshed and renewed.

There were two engagements on Saturday and one on Sunday. The first was the Battle of White Pond, which occurred a day before the Battle of Aiken.

Though a Federal victory, the fight proved to be a delaying action by the Confederate Soldiers and set the stage for the Battle of Aiken and the ultimate defeat of the Federal Forces. General Kilpatrick had plans of marching through Aiken, South Carolina, toward Graniteville, South Carolina, and the Cotton Mills that supplies the Army with over 4,000,000 yards of cotton material a year.

From here, S.C., Kilpatrick had planned to move on to Augusta, Georgia, and the Confederate Powder Works. On the streets of Aiken, South Carolina, Kilpatrick plans were forever interrupted.

February 11, 1865, witnessed Brigadier General Hugh J. Kilpatrick entering the town of Aiken. General Joe Wheeler waited on him with a carefully drawn up ambush in the shape of a V. One of the best descriptors of the battle came from a Federal soldier by the name of John Reed.

He was with the 92nd Illinois Mounted Infantry. “We were within a half-mile of the town of Aiken, when we discovered long lines of rebel cavalry.

The column halted ... Kilpatrick came dashing up to the head of the column and desired to know the reason of the halt. Just then a locomotive ran out in plain view near Aiken and whistled and whistled. Kilpatrick brought up the artillery and sent a few rifled shells toward the locomotive and into the town. Kilpatrick also called on the 92nd Illinois Silver Cornet Band to play Yankee Doodle.

The next thing in order was for the 92nd Illinois to charge into the town ... Now we felt that we were going into a trap, but Kilpatrick took the lead ... Gen. Atkins ordered the 9th Ohio into line of battle on the right of the road, flanking the artillery, and the 9th Michigan Calvary into line of battle, flanking the artillery on the left of the road, and holding the 10th Ohio Cavalry in reserve.

The ladies of the town waved their handkerchiefs in welcome and smilingly invited the officers and men into their houses.

But that kind of a welcome was unusual in South Carolina. It was an additional evidence of danger. In the farther edge of the town, the enemy was in line of battle.” (http://battleofaiken.org/history.htm)

A Confederate soldier by the name of Morgan (5th Georgi Cavalry) wrote: Gen. Wheeler was trying to entrap him and capture his whole force ... This ruse, no doubt, would have worked well but for the extra enthusiasm of an Alabama regiment (who) ... opened fire and thus precipitated a general engagement ... Our regiment had just been issued sabers with wooden scabbards, which were awkwardly attached to our saddles. I was mounted on a very fine mule. We charged the enemy through scrub oak forest and open peach orchard, through the village, driving them back...It was an all-day fight. As we halted in one of the charges, my mule was shot from under me, the ball passing immediately under my left leg and entering the poor creature’s heart.

With an unearthly yell ... she bounded into the air and in falling, caught me half dismounted, with my left leg under her body. The soft plowed ground on which I fell prevented its being broken ...” (http://battleofaiken.org/history.htm, Battle of Aiken, by Pete Peters)

The plans fell through when an alleged Alabama trooper fired hastily upon the advancing Federal forces. Realizing that the momentum could be lost, General Wheeler ordered an all-out attack in an effort to route the cavalry and Federal forces.

His strategy worked and the town of Aiken was spared.

The action taken by the Confederates prevented massive destruction within and around the region. And General Kilpatrick had to eat his words: Prudent, Bold, But Not Rash! Two months later, General Robert E. Lee would surrender the Army of Northern Virginia effectively ended the war. For more information about next year’s events at the Battle of Aiken, contact the following: www.battleofaiken.org