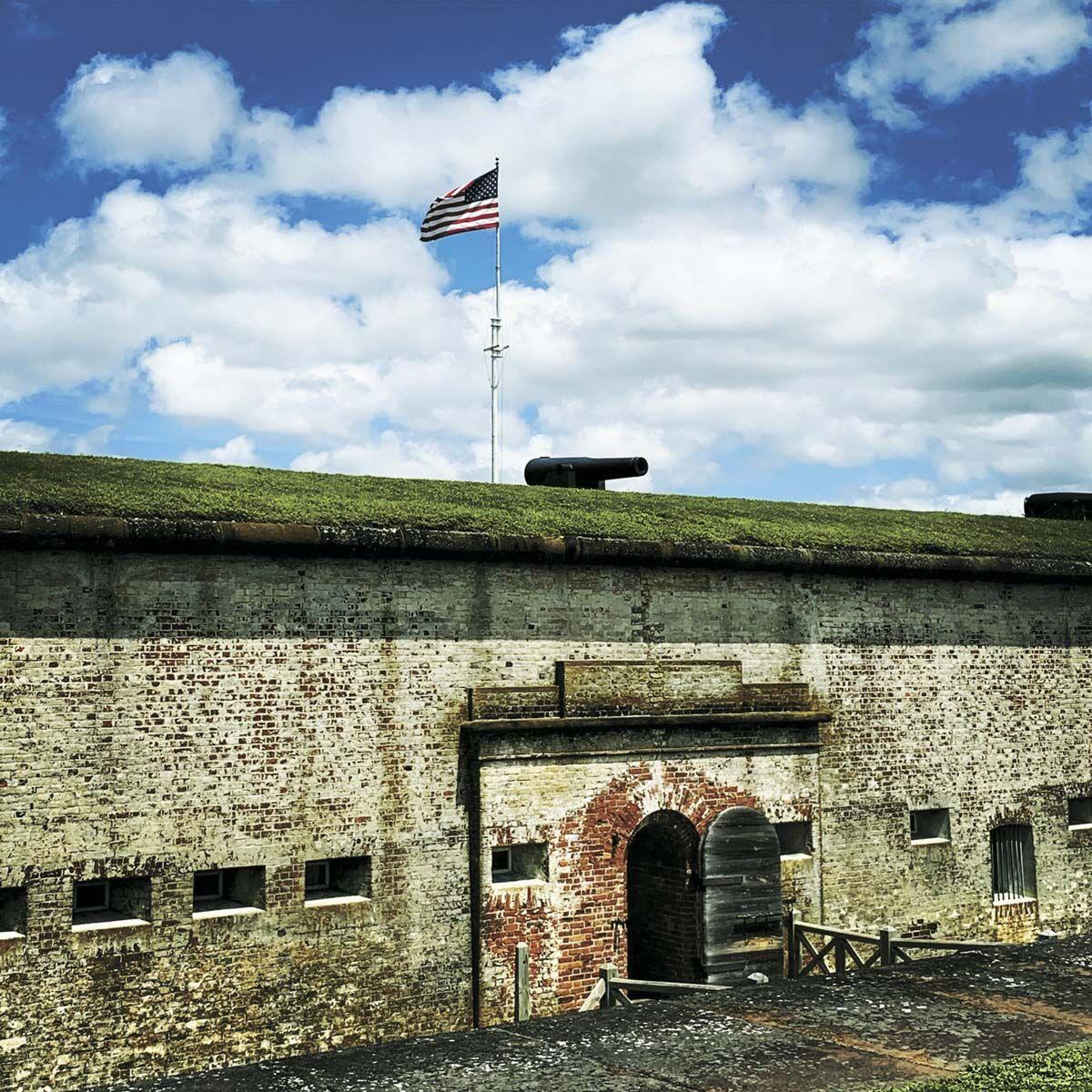 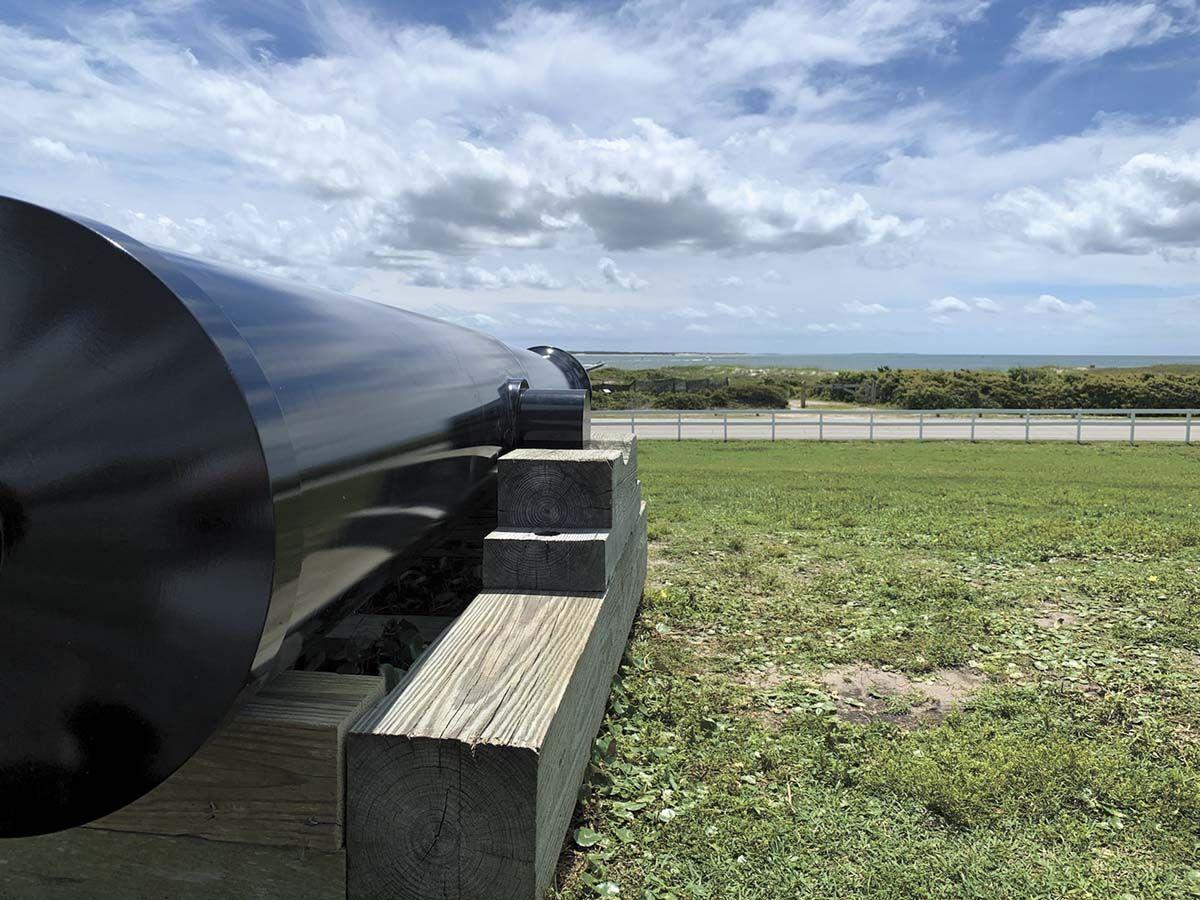 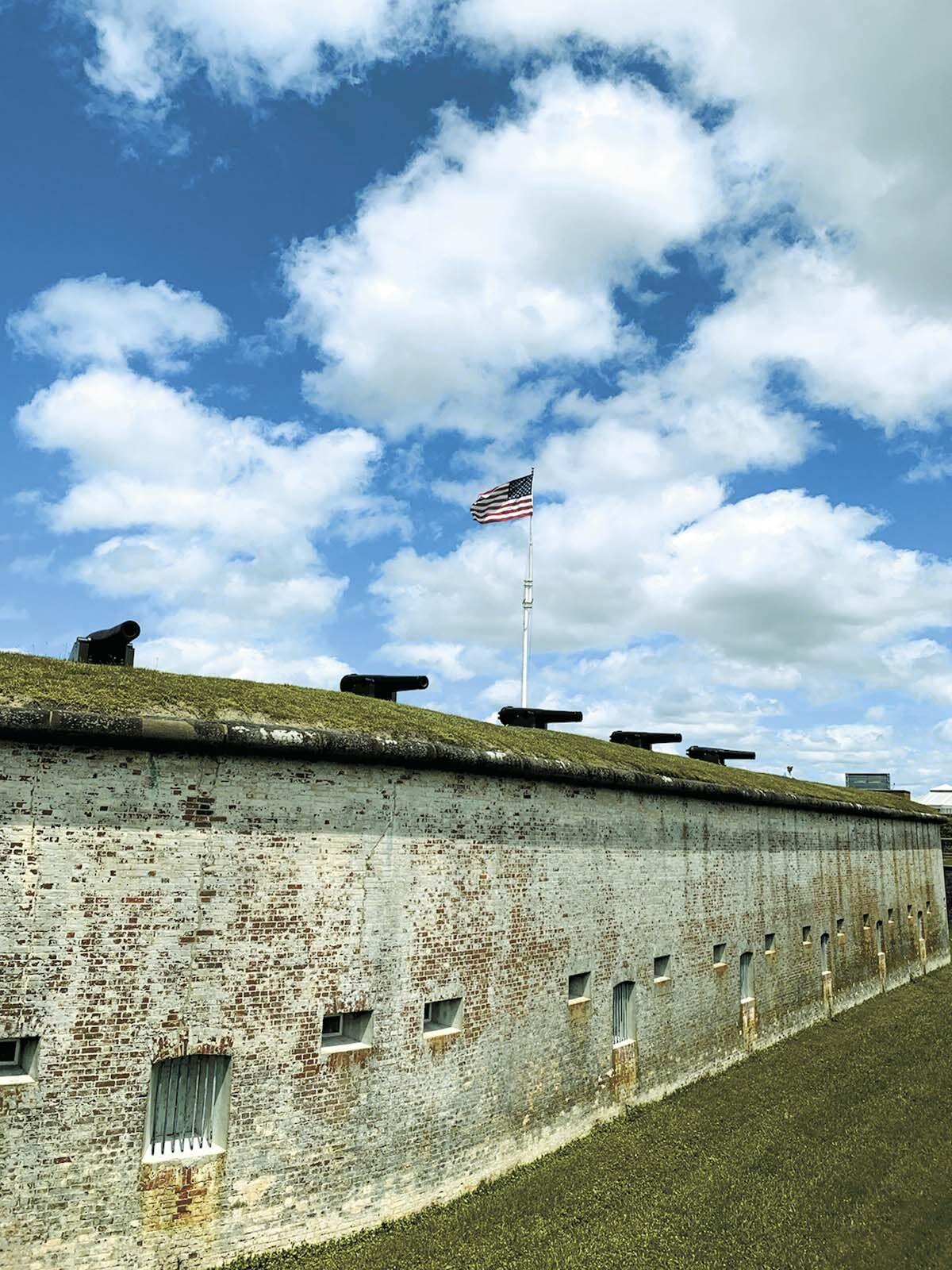 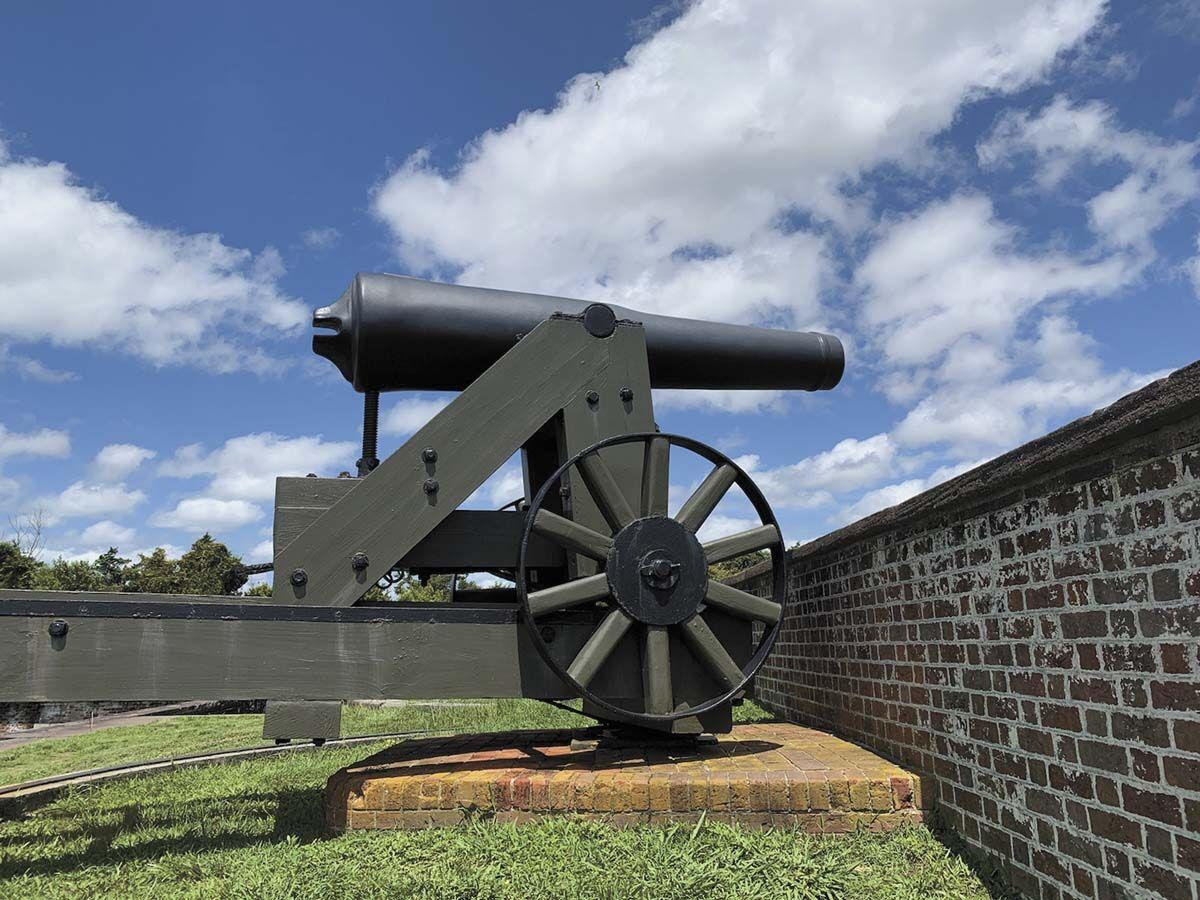 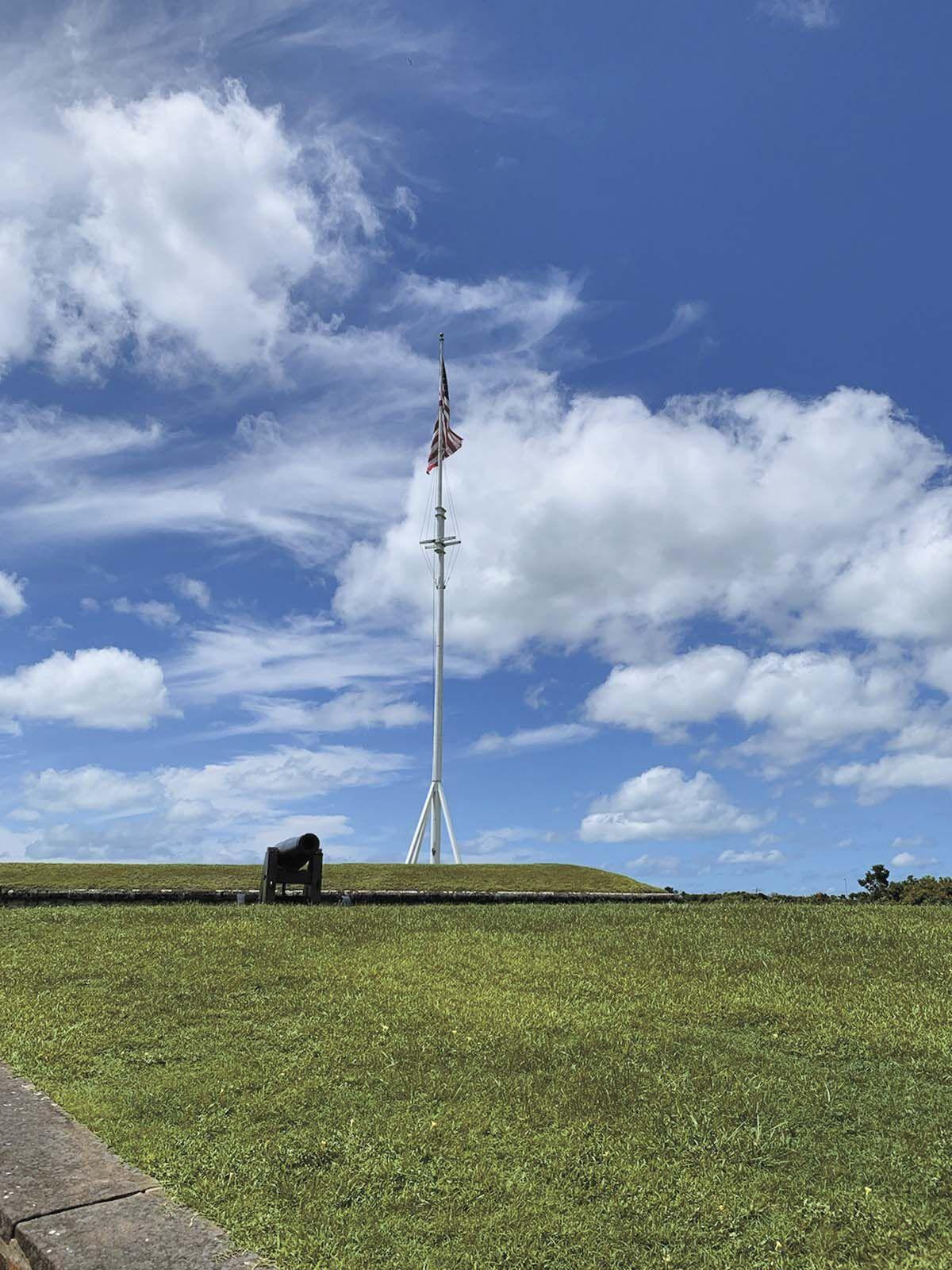 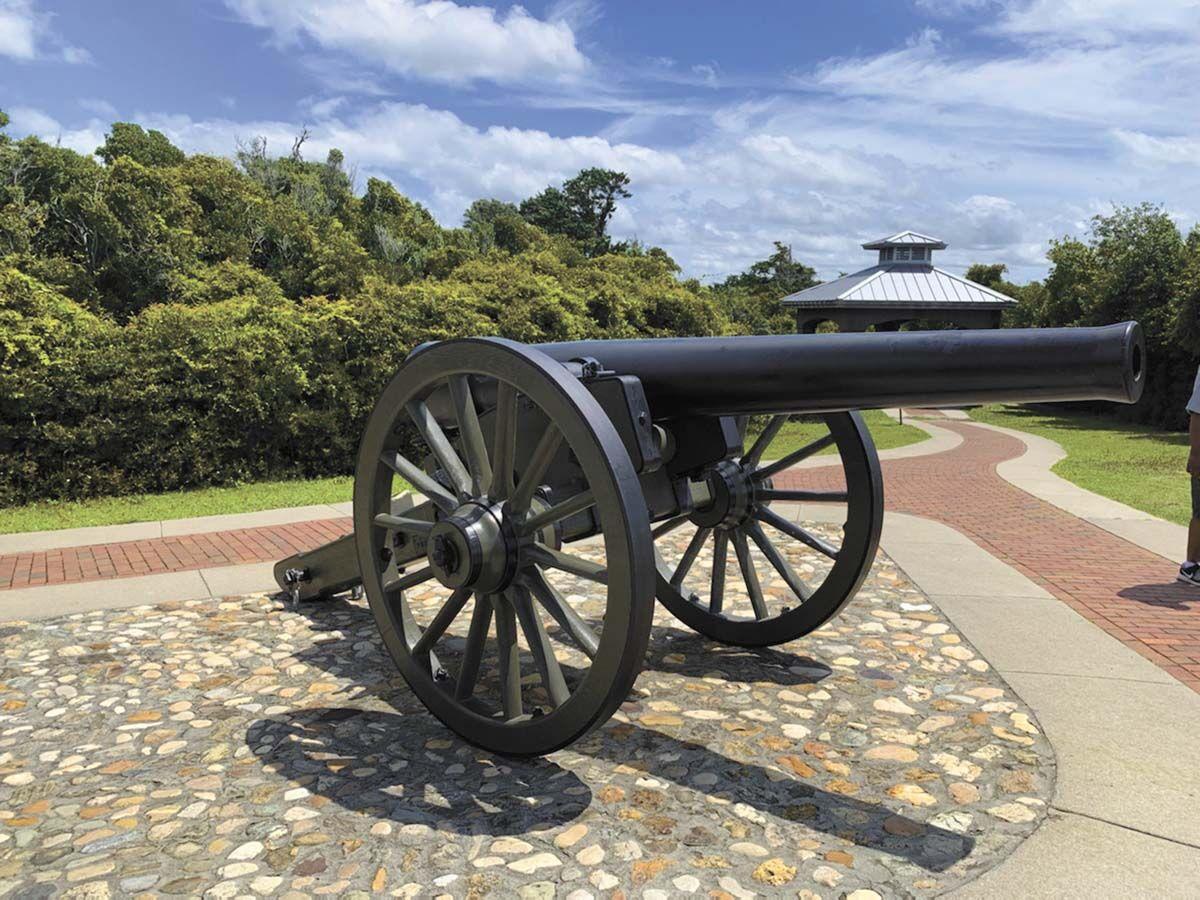 It remains locked in a seemingly ceaseless battle with the incessent coastal winds and impossibly small set against the mammoth white clouds above it, sailing through an azure sky.

It was the flag thought first caught my attention once we walked through the Coastal Education Center and up the short walkway to the old Fort.

The wind atop the hill was unforgiving, not in a destructive way like a Hurricane, but in a ceaseless, unforgiving torrent that drowns out nearly everything else.

The green of the grass, the blue of the sky and the flag slowly being blown to tatters before your very eyes.

There’s poetry there, if you’re so inclined and possibly metaphor, too, if you care to look for it.

But it was warm and grass was green and the sky was blue and the ocean was in the distance and I found the Fort grounds an exceptional place to turn off my mind and simply soak in the sights around me.

But not to wander. Fort Macon is many things -what it decidely is not is a great place for meandering.

The Fort was built for function, not safety and so there are stone stairs cut deep and steep into the grass which would have given soldiers a quick and effective way to get down inside the storage rooms quickly, but without guardrails would also give a tourist with a wandering mind a quick and, quite possibly, deadly drop.

Fort Macon’s history dates back well before the Civil War to a time when the British, the French or the Spanish or even pirates like the infamous Blackbeared might sail up and cause an unsuspecting coastal town a lot of damage.

In fact, Beaufort was captured by the Spanish in 1747.

In 1756, construction began nearby on Fort Dobbs to guard the entrance to Beaufirt inlet but it was never finished, allowing the British to capture and plunder the town in 1782.

In 1808-09, with another war with the British looming, Fort Hampton was built and subsequently abandoned after the War of 1812.

Shore erosion and a hurricane in 1825 swept the remnants of the fort into the sea.

In the wake of the War of 1812, a series of 38 new, permenant coastal forts known as the Third System was created. Built between 1817 and 1865, these forts were desinged to seriously upgrade the nation’s national defense.

Construction began on Fort Macon in 1826 and lasted for eight years with modifications made from 1841-46.

The fervor for national coastal defense lessened as distance from the War of 1812 and the cost of manning 38 seperate forts weighed heavily on Congress.

Fort Macon was only actively garrisoned a handful of years between 1834 and 1849. Much of that time the Fort was home only to a caretaker stationed there by the Army.

However, when the Civil War broke out in 1861, the possible strategic value of the Fort made it of interest to both Confederate and U.S. forces.

Two days after war broke out, North Carolina militia forces seized the Fort for the conderacey, occupying it for a year and arming it with 54 heavy cannon.

It was not, however, enough to deter Union forces led by Brig. Gen. John C. Parke who captured Morehead City and Beaufort without resistance then landed on the beach in early Spring.

In late April, 1862, Parke’s forces, along ith four Union Navy gunboats bombarded the fort for 11 hours forcing the Confederate forces within to surrender.

“While the fort easily repulsed the Union gunboat attack, the Union land batteries, utilizing new rifled cannons, hit the fort 560 times. There was such extensive damage that White was forced to surrender the following morning, April 26,” the Fort Macon State Park brochure explains. “The fort’s Confederate garrison was then paroled as prisoners of war. This battle was the second time in history that new rifled cannons had been used against a fort and demonstrated the obsolescence of fortifications such as Fort Macon as a way of defense.

The Union Army held Fort Macon for the remainder of the war, while Beaufort Harbor served as n important coaling and repair station for the Union Navy.”

After the war, the U.S. held a garrison at Fort Macon until 1877. During this time, the Fort was used as a Civil War and military prison.

Deactivated in 1877, the Fort was recommissioned in 1898 in the build up to the Spanish American War before being abandoned in 1903.

Unused in World War I, the Fort was sold to the state of North Carolina for $1 to be used as a public park. In 1936, Fort Macon opened as the North Carolina’s second state park.

That tenure was short lived as the Fort was once again occupied from December 1941 to November of 1944 by the Coast Artillery Corps during World War II.

Today, in addition to serving as a historical reminder, the park is host to great fishing, camping, swimming and other activities.

The fort still overlooks the Atlantic but now the chief view from its walls is that off fishing craft and the occassional parasail.