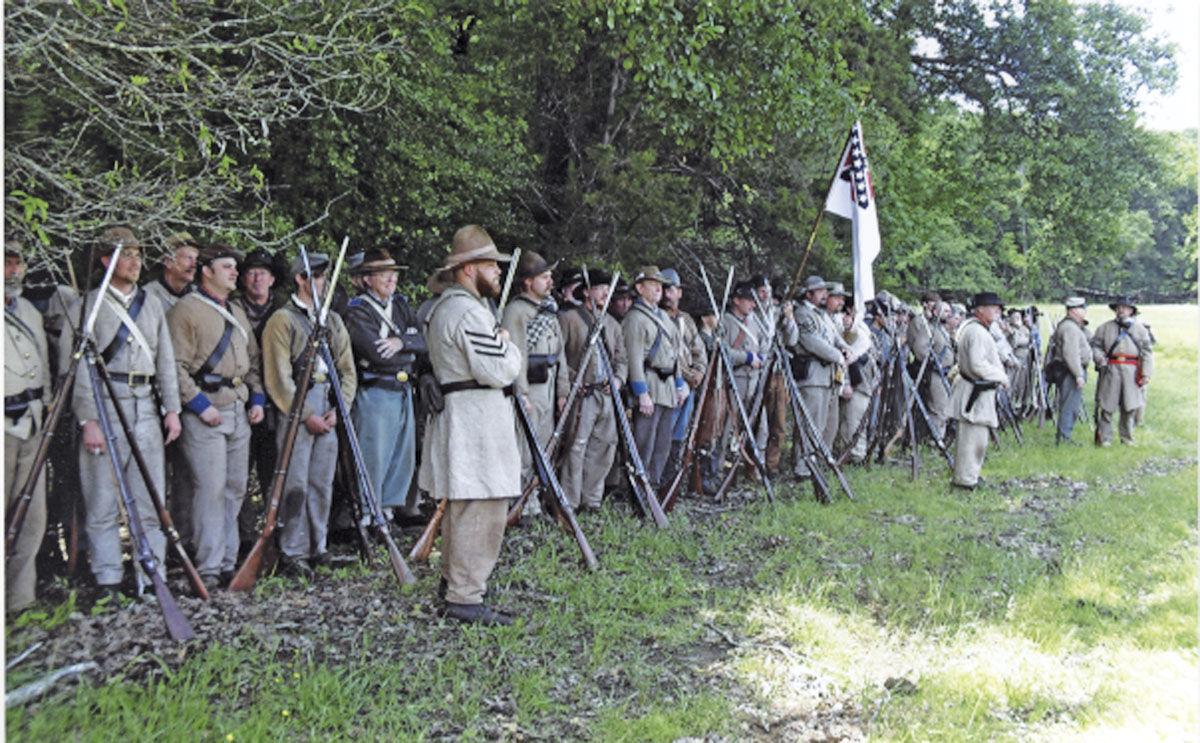 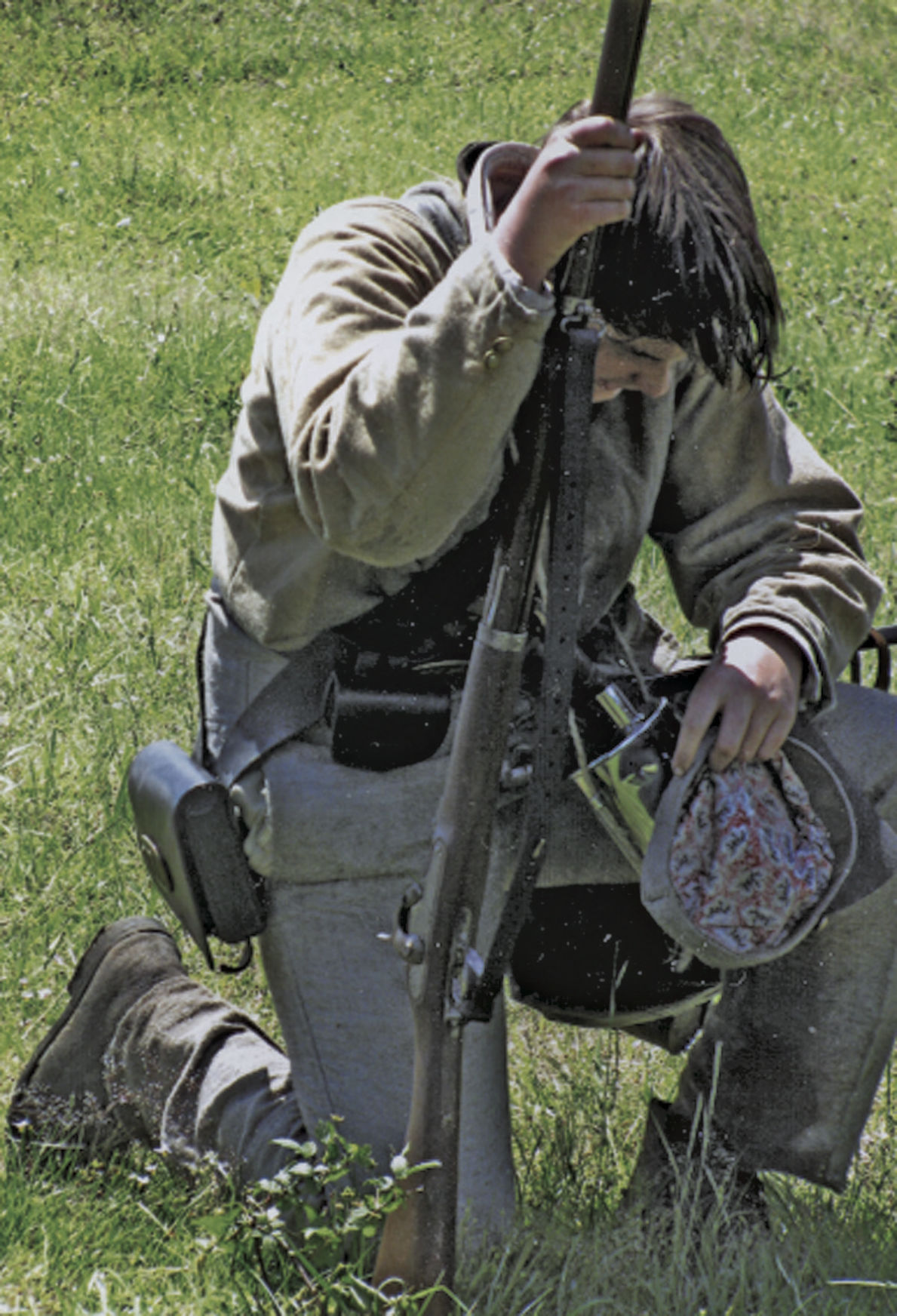 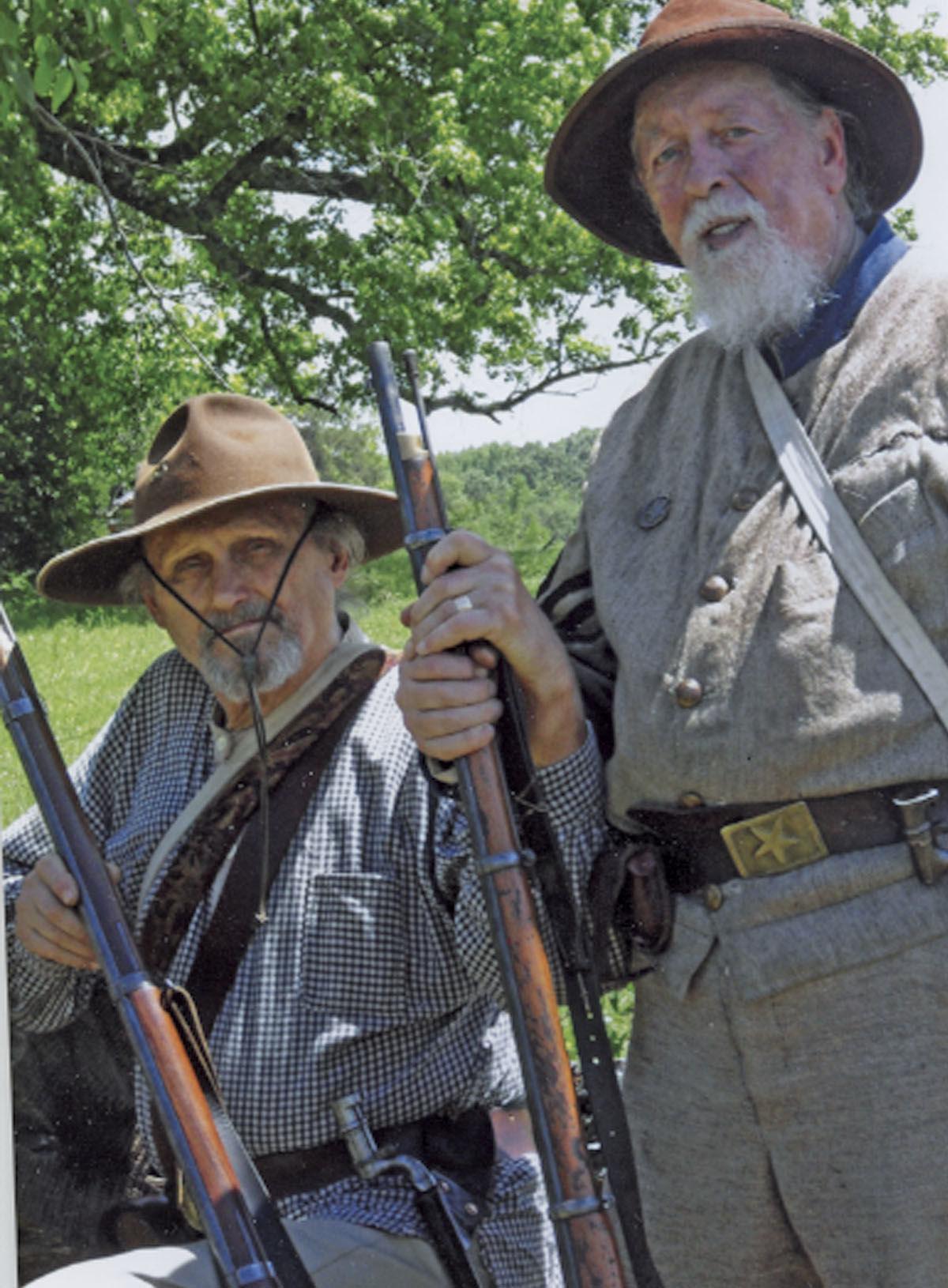 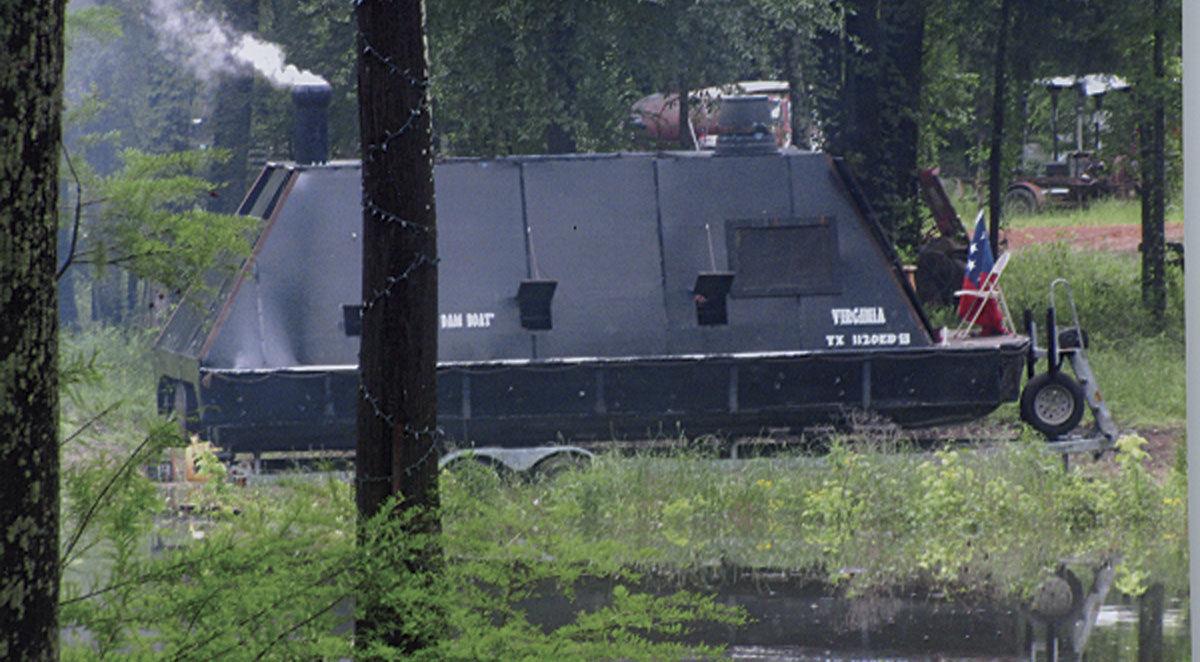 My wife & I had traveled from north of Knoxville Tennessee to San Antonio Texas, to be with respective friends the first week of May. The Texas weather had been uncharacteristically wet & gloomy all week. My reenactor friend Bubba Cheek and I headed back north on a Friday, bound for Jefferson Texas, just south of Texarkana, and drove through rain a good deal of the way.

Jefferson was a thriving city at the onset of the Civil War with a population of almost 30,000, at the time the 6th largest city in the state of Texas according to Wikipedia.

It hosted steamboat trade, was an important southern supply depot with an ordinance works and three powder magazines,...prudently located outside the city for safety concerns.

Cheek was the sole representative of The 6th Texas Infantry Alamo Rifles, and I was the only representative of the 63rd Tennessee Infantry to attend the Battle of Jefferson, which in past years had been described as “the largest Civil War reenactment in Texas.” The years following the Civil War took it’s toll on the population of Jefferson, and it’s citizens numbered just over 2,000 in 2010.

The downtown area is compact, with brick paved streets, and primarily mom and pop small business owners. It is a genuine step back in time.

Friday afternoon we reconnoitered the area, locating the train depot, the RV park and registration, where we discovered the period musical gathering had been relocated to the registration hall due to the rain. We found only 2 musicians present, who apologized for the fact other musicians had not arrived. After about 30 minutes with no other musicians arriving, I made an announcement to the crowd of about 40 people.

I told them that I had only that moment been informed by courier, that the absent band members had been captured and incarcerated by Federal rowdies, who were demanding a ransom for the release of the band and their instruments, and that I had been authorized to collect and deliver all available script, greenbacks, and valuables from the assembled crowd to affect the release of those brave southern prisoners.

My plea was rebuffed. A third musician did appear some 20 minutes later. Again I rose and addressed the crowd, explaining that word was just received that the ransom had been reduced to a barrel of rum, 3 twists of tobacco, and three fine cigars.

Again I was rebuffed, and I admonished the crowd that I could not be held responsible for the wretched fate of those poor musicians.

I did find it quaint that we found reenactors camped virtually all over the town, in parks, in vacant lots, in the RV park,and even in private yards. Seemingly the entire community was grateful and joyful to host this event.

Saturday morning at 10 am was bright and sunny in the downtown stretch of about 8 city blocks. The red brick street was dry, and the streets were solidly lined with excited observers.

Seemingly half of the crowd were in beautiful, appropriate, period civilian attire with every age group represented, from babes in arms to elegant elders. Second story balconies and windows boasted spectators craning to get a close up view of possibly a loved one, or someone they knew, or a Kodak moment. The Infantry and Calvary of both armies were heavily engaged in the downtown skirmish. There was even a small contingent of naval troops. The horseshoes and brogan cleats struck the bricks in a steady rhythm to the marching drumbeats. The clear morning air was alive with the cheering crowd, thunderous rifle volleys by company, and black powder smoke at times partially clouding the view. Then the crowd and reenactors alike mingled among the mom and pop eateries, mercantiles, antique shops and sutlers. It was a wonderful morning. I saw not a protest, no placards or dissenting signs, nary a frown. This Texas town, it’s citizens and merchants, were happy and proud to host this annual event.

So Bubba and I had tickets to ride the somewhat period open car train through the Big Cypress Bayou. In a surprise nod to innovation, the engine was neither wood nor coal fired, but converted to propane. No one seemed perturbed. Event advertising had proclaimed a recreation of “The Great Locomotive Chase,” but there was but one engine, no chase, and no engine Texas running backwards to capture the fleeing Yankee robbers. No one seemed to notice or looked upset. In the rear seats of every other car were two dismounted calvary uniformed Rebs. As the train passed the RV park along the bayou, reenactors encamped there put on a show of firing at the train, it’s passengers and defenders, as it crept along. There was a speaker system on each car, and we could barely hear above the gunfire a running commentary of history mixed with a blow by blow of the unfolding conflict. We were not sure if it was prerecorded or if there was a real person reading from a script. The experience was strangely reminiscent of a Six Flags amusement ride. No one seemed to mind. There was a one quarter scale replica ironclad with three canons blazing away at the train. The bayou really had no navigable channel for anything larger than a canoe, and the ironclad was actually mounted on a trailer sitting on dry land, but it almost looked like it was in the water.

Later that Saturday we assembled at the Cypress River Ranch for the afternoon battle. Parking was plentiful and well managed. The ground was well drained and only slightly damp. The fields were a lush green and had been mowed a week or so previously, allowing growth for a natural look but almost eliminating briars and other natural obstacles that can disrupt an advance or enable injuries. We had found some old friends, the 9th Texas Infantry from the Dallas Fort Worth area led by Capt. Ron White, & we happily joined their ranks. There was ample artillery for both armies, and neither seemed in short supply of powder. Pre-planted pyrotechnic ground charges in the opposite fields gave the illusion of canon blasts ripping apart the earth. It looked like the entire population of Jefferson and visitors had come out to witness the carnage,...and every other person had a camera or video cam to record it for posterity.

The battle was somewhat choreographed and went for the most part smoothly and as planned, with the single exception that I took a hit (simulated being wounded), and falling as realistically as Hollywood might allow I landed in a Texas sized colony of fire ants. Realizing that the dead seldom react by feverishly fending off the vile creatures, I was happily rescued from the dilemma by a comrade who stopped to roll me away from the swarm, offer me water, and quickly brush them away.

I’m pretty sure these were northern ants.

Saturday night we attended a wonderfully produced play, performed in a beautiful, old, former church converted to a theatre by local resident members of a theatrical group.

Our Sunday battle was similar in nature and scope as the previous day’s conflict.

The sun was bright, the ground drier, the ants were avoided, and I sustained a leg wound which luckily did not necessitate amputation. I felt fairly certain that southern steel and shot carried the field both days. The Federals might dissent, but it seemed so to me.

Happily we bade a fond adieu to our pards in the 9th Texas, and headed southwest back down the highway towards 2019.